Any proposed missions to explore the black liquid on Titan? Technical challenges?

I was very interested to know what the black lake on Titan would look like. Are there any plans or proposals for a future mission to land on and/or in one of the lakes of black liquid on Titan, or even to land nearby and approach it?

Would there be any unique technical challenges to this that have not been encountered and solved for previous lander missions?

It's a late answer but I was surprised nobody cited this: 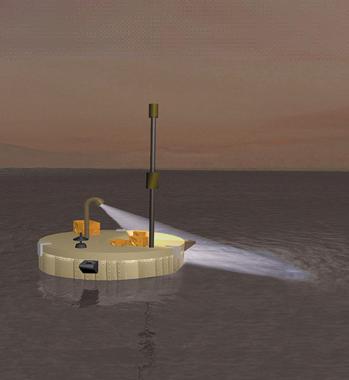 The TiME lander was a part of cooperative NASA-ESA mission TSSM. The mission was not considered as highest priority by Planetary Decadal Survey 2013 so it's not being implemented now. Also it was studied as standalone Discovery class mission.

• Understand Titanʼs methane cycle through study of a Titan sea.

Not the answer you're looking for? Browse other questions tagged future-missions titan or ask your own question.

5
Why Never-EVER Land?
8
How quickly might a Titan rover or drone get covered in oil and dirt? Will it need windshield-wipers?
5
What is the evidence that the dunes of Titan are made of "water chips"?
5
What is the current status of Stirling engine-based radioisotope generator technology?

8
Are there any Mars missions currently in the design phase which could take advantage of NASA's Low Density Supersonic Decelerator?
5
Why Never-EVER Land?
6
What would a "water" landing on Titan be like? How viscous is the liquid?
7
What are the technical challenges in building a Titan rover that didn't need heating?
8
How quickly might a Titan rover or drone get covered in oil and dirt? Will it need windshield-wipers?
8
How (the heck) do they know some lakes on Titan are 100 meters deep?
9
Can Dragonfly make it to one of Titan's Lakes?
1
Has any mission to Titan tested the idea of producing electricity from Saturn's magnetic field?
9
What is the pop-up circular disk with spiral pattern in this NASA animation of the Dragonfly helicopter for Titan? Antenna? Kind, band, target?