What is the evidence that the dunes of Titan are made of “water chips”?

The Southern California Public Radio news item What Cassini saw on Titan: 'Dunes of the Arabian desert' but made of water chips, not sand explains:

"Little chips of water ice come off (the mountains) and get washed downstream, and then they get pushed up onto the beaches," Ray said. "They get dried out and then they get picked up by the wind and blown into the deserts. And around the entire equator of Titan is nothing but dunes as far as the eye can see -- just like the dunes of the Arabian desert. But they're made out of little chips of water covered in hydrocarbon goo."

According to the article, Trina Ray is the Titan orbiter science co-chair at JPL.

Question: What is the evidence that the dunes of Titan are made of "water chips"?

below: Dune patterns on Titan, pia15225 from NASA JPL. Click for full size. Despite the names, these represent various imaging techniques by Cassini of dunes on Titan. There is a much longer description in the pia15225 link. 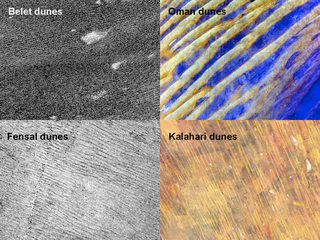 It is modeled that the dunes must form from chips of Titan's bedrock. Whether those chips are primarily hydrocarbons or primarily water ice, depends on what Titan's crust is presumed to be composed of. There are varying models, depending on what is known of Titan (such as the moment of inertia), and one model with a reasonable level of support involves a substantial water ice crust.

A.D. Fortes explains in "Titan’s internal structure and the evolutionary consequences" that Titan's moment of inertia was estimated from measurements taken by Cassini of Titan's quadrupole gravity field. From these observations, an internal structure with a shell of water ice can be derived.

Not the answer you're looking for? Browse other questions tagged saturn cassini titan or ask your own question.

5
Any proposed missions to explore the black liquid on Titan? Technical challenges?

9
Titan - Is the source of so much Methane being overlooked?
2
Does a Titan flyby guarantee that a spacecraft can escape Saturn?
1
What is the solar flux on Titan?
6
What would a “water” landing on Titan be like? How viscous is the liquid?
7
What are the technical challenges in building a Titan rover that didn't need heating?
8
How (the heck) do they know some lakes on Titan are 100 meters deep?
3
Are there both “lake” and “sea” designations on Titan? Officially or otherwise?
3
Underground sea in Titan, is it water or hydrocarbons?