Does Venus have a north star or south star?

I am trying to figure out how you would navigate on Venus. On Earth you can use Polaris as a North Star to find north. Would there be a star on the Venus sky which could function as either a north star or south star?

A pole star for a given planet would be a star that coincidentally just happens to be in the direction that the planet's axis of rotation is pointed. According to Wikipedia, that direction for Venus is RA=18h11m, Dec=67.16 deg.

You can see on the screenshot that the Earth's pole star Polaris is not exactly at the pole position, and if you watched it over centuries or eons you'd see that its always moving around.

An interesting question might be how to do navigation on Venus without a view of the night sky due to the (very) opaque clouds. An antenna large enough to receive radio signals from the Sun, Jupiter, or a variety of bodies outside of the solar system may not be so portable, and the very thick atmosphere would tend to block X-rays and any directional components that might be found in cosmic rays.

However, a robotic solar power plane flying somewhere around 60 - 80 km above the surface where sunlight can recharge its batteries might venture near the darker parts of the terminator to spot some stars and planets for additional location cues (assuming it had an on-board ephemeris). It wouldn't necessarily need a pole star to do this though.

below: Screen shots from a planetarium view at in-the-sky.org, but with a "star" shape added at the approximate position of a hypothetical north or south pole star for Venus.

Edit: But stating which one is which requires some careful definition as was pointed out by @TomSpilker's comment. If you look down at the solar system "from above" and looked at each planet, you'd see that all planets rotate around the Sun in the same direction, counter-clock-wise. The direction of this rotation is called prograde. If you then look at the direction of the rotation of each planet around its own axis you'd see that Venus and Uranus spinning was retrograde. https://en.wikipedia.org/wiki/Retrograde_and_prograde_motion

So if you use the right hand rule to define a North for each planet, Venus' North points to the same hemisphere as Earth's South. So I've left the plots of the locations of Venus' hypothetical pole stars unlabeled. 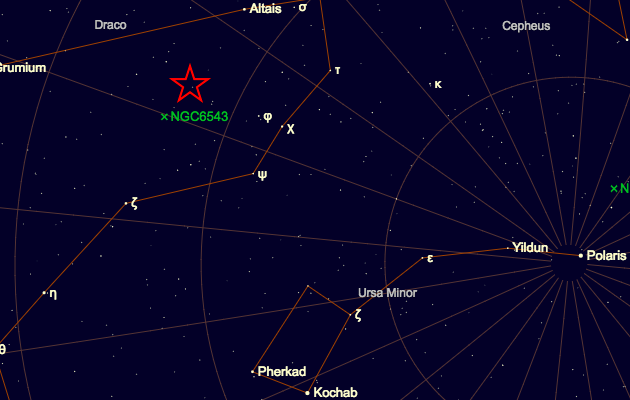 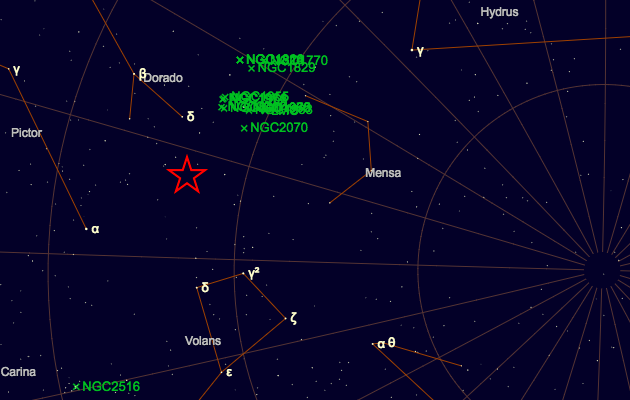 Not the answer you're looking for? Browse other questions tagged navigation venus or ask your own question.

1
What is the science behind the variation of Mars' effective sky temperature with latitude and longitude? Why the “hot spot”?

22
How can spacecraft navigate without contact from Earth?
25
Is there a Martian “North Star”, usable as Earth's North Star?
18
How does the star tracker in Voyager 1 lock onto a specific star?
24
How does Venus' thick atmosphere survive against the solar wind?
4
How would you navigate an airship on Venus?
4
How would people measure time on Venus?
5
What determines if a star tracker blends two stars that are close to each other?
10
Why do radar maps of the surface of Venus have missing slices?
3
What is the math behind satellite star trackers?