The current answer to the question Highest number of satellites launched on a single rocket is 104, on ISRO's PSLV-C37. One of the runner-ups is KANOPUS-V-IK with about 73 satellites. The trick is to land an order from Planet Laps for a flock of doves. The Doves should be considered mostly identical here, and would count as one satellite design.

edit: So far there are no answers, so I'll make another adjustment. The whole concept of the cubesat standard is that they should all deploy the same. A cubesat "dispenser" should not care who's cube it is or how it was designed internally. Therefore:

1U, 2U, 3U, 6U, etc. Each cubesat size counts as one design for the purposes of this question. I'm trying to get a handle on the variety of satellite shapes and sizes that a single rocket must handle.

below: Cropped from Spaceflight Now's Soyuz rolled out for launch of multinational satellite cluster Some of the 73 satellites slated to launch on a Russian Soyuz rocket Friday are pictured before encapsulation inside the launcher’s payload fairing at the Baikonur Cosmodrome in Kazakhstan. Credit: Glavkosmos 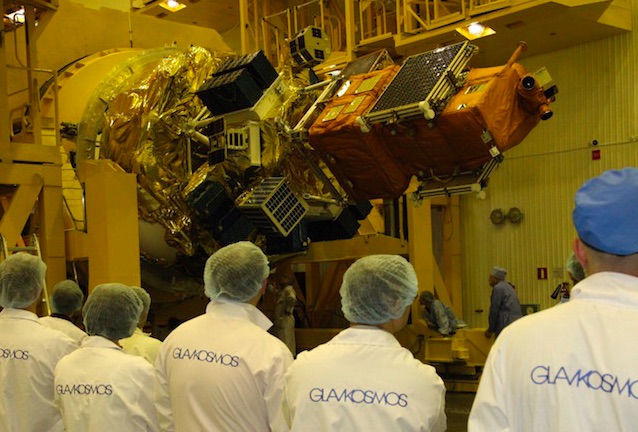 Now, counting these all together gives ~20 distinct satellite shapes, a large portion of which are composed by the sheer size variety in cubesats. Unfortunately though, it's difficult to get an exact manifest of everything that actually ended up launching due to the nature of how many customers were on this flight. Furthermore, defining what exactly counts as a satellite is a bit tricky as multiple payloads were designed to split or were free-flying launch dispensers for smaller satellites. Items marked by a (*) indicate that they may not have launched, but even without them, the number of distinct satellites is still in the high teens range.

For comparison, the PSLV-C37 launch that previously held the record carried 104 satellites, of which 1 was larger, 88 were doves, and 8 LEMUR satellites. Even if all the remaining satellites were distinct unique shapes, it would be still only have carried 10 types of satellites.

Overall, I find it likely that Transporter-1 mission holds the record for this with somewhere between 17 and 20 distinct satellite shapes however the number is rather low and could be beaten by launches in a pre-cubesat era (eg a shuttle launch) because the cubesat system is quite new in the history of spaceflight (invented in 1999).

Not the answer you're looking for? Browse other questions tagged launch payload record or ask your own question.

16
Highest number of satellites launched on a single rocket
13
Why aren't space telescopes put in GEO?
10
What ever happened to SHERPA?

16
Highest number of satellites launched on a single rocket
7
Does the delta v requirement of a rocket to place a satellite in orbit depend on the position of other planets?
20
How does a single rocket place multiple satellites into orbit?
12
What limits the number of times that a liquid fueled rocket can restart?
13
Why are there so few solid rocket satellite launchers?
15
How often are space launches substantially delayed by protests physically at the launch site?
5
What rocket system launch contained the highest amount of propellent potential energy?
8
If Country A's rocket hits an incorrectly declared satellite of Country B, which institution can arbitrate the dispute? Under which international law?