In the 1960s the USSR developed the Fractional Orbital Bombardment System. We can call this system FOBS for short. This system permitted the launch of a payload of nuclear warheads which briefly remained in orbit. The warheads could deorbit as required to attack targets on the Earth. 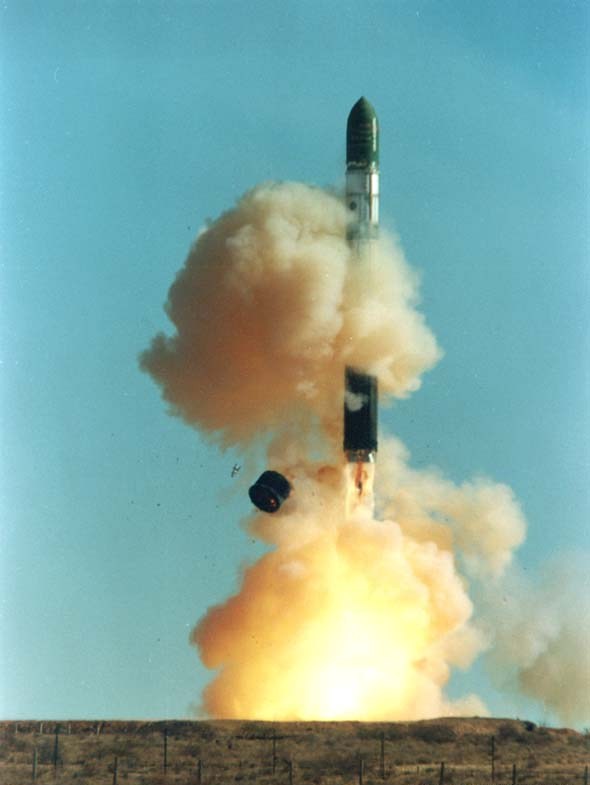 It's unclear if this system was ever fully operational or how reliable it would have been. Later, this system was withdrawn as the result of international treaties. There is a possibility that newer Russian built systems still have FOBS capability, although this is unconfirmed.

Jiffy Pop was developed in the same time frame by the Frederick C. Mennen. It is a packaged food product that is ready to cook. It uses an aluminum container to allow stovetop cooking of popcorn. Really, any heat source would work. It allows fresh popcorn to be quickly produced.

Can we modify the Jiffy Pop container to survive re-entry and still properly pop the popcorn? It shouldn't arrive undercooked or burnt up, but properly cooked and ready to eat. The speed on touchdown should be low enough not to cause damage to simple structures like huts. If we needed to add a parachute that would be OK.

The idea being we can load our modified Jiffy Pop containers into a FOBS capable missile. Then we could deliver freshly popped popcorn to anyone under the orbital path.

The first problem here is guidance, the container has none on its own. To solve this, a small extra stage would need to be placed in the rocket fairing with the container which would be able to orientate and de-orbit the container. This is very similar to how nuclear warheads are delivered however even the most accurate nuclear missile couldn't aim at a specific house due to wind, atmospheric pressure etc. A method of making it more accurate would be the curiosity rover's landing process. You could place the container inside a small capsule which has a heat shield, its own parachute and fins / reaction control and that would allow for a much more accurate re-entry. After the main parachute had deployed the heat shield would separate and the capsule would slow whilst also course correcting, the container would then drop out the bottom of the capsule with its own small parachute which would then allow it to land relatively close to your house. As for making sure the capsule and heat shield don't hit your house; you could add small solid fuel boosters onto them to launch them over to your neighbours house and make it their issue. The second issue is heating. this can be easily achieved now that the container is in a capsule which could act like a microwave however using re-entry heat instead of radiation. You could introduce heat vents on the capsule to ensure and optimal temperature is kept. After all that you should have your fresh popcorn wherever you are!

Not the answer you're looking for? Browse other questions tagged reentry space-art parachute or ask your own question.