Are there any major flaws with the Mars Architecture used in the Martian?

In the movie The Martian, a giant spacecraft known as the Hermes is used to ferry astronauts from Earth orbit to Mars' orbit.

Once in Mars orbit, the astronauts take a Mars descent vehicle to a pre-assembled hab, pre-fueled MAV, 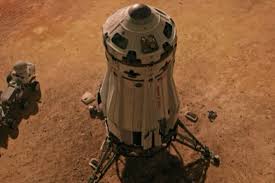 and two large rovers waiting on the surface. 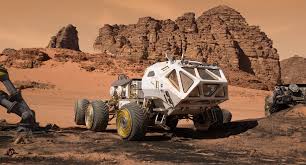 I remember that Mars Direct called for a Earth Return Vehicle to be fueled on the surface of Mars via a series of chemical reactions, similar to that in the Martian.

Putting all economic obstacles aside with building the Hermes and sending tens of tons to Mars, are there any major flaws in the Martian Mars Architecture that would prohibit a manned mission to Mars from happening? Are there any design flaws with any of the vehicles used to transport the humans, or with any life support systems?

There were some major flaws in the backstory. I believe these were the movie studio's fault and not Andy Weir.

In Tyson's trailer for the Martian The Hermes is harbored in low earth orbit between missions. The Hermes departs from LEO and arrives in Mars orbit 124 days later.

The Hermes accelerates at 2 millimeters/second^2. With this acceleration it would take Hermes 40 days to climb out of earth's gravity well. That completely wrecks the 124 day trajectory Weir had so painstakingly calculated.

Moreover, most of the slow 40 day spiral would be in the highly radioactive Van Allen Belts. The slow climb would kill the astronauts as well as Weir's trajectory.

The movie would have been more believable if Hermes were harbored closer to the edge of planetary gravity wells. Myself, I'd park Hermes at EML2 and Deimos. This way the 124 day trajectory would have been believable. 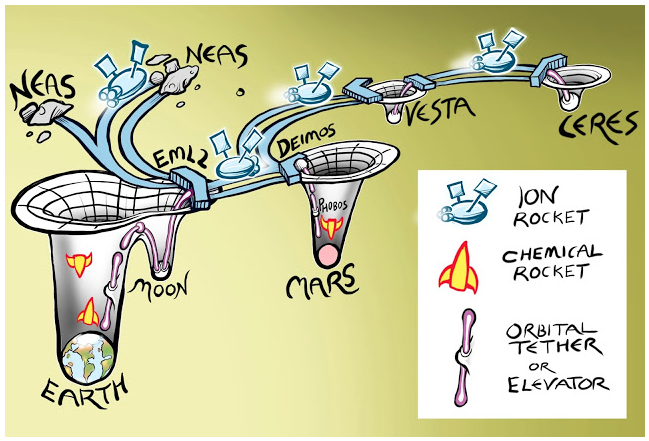 Above is a cartoon illustration of my dream infrastructure. It's from my blog post Xenon. Solar powered on engines would do the trips between various heliocentric orbits. Climbing in and out of planetary gravity wells would be done by orbital tethers and chemical rockets.

One key piece of technology that Andy Weir "created" was radiation-blocking material. In the book they have a really thin, light, flexible material that blocks all radiation.

There's nothing close to that in the real world. NASA is working on solving the problem, but it's probably not going to be anything like it was in the book.

Why we need much better radiation blocking technology then we have today.

Over the course of about 18 months, the Mars Odyssey probe detected ongoing radiation levels which are 2.5 times higher than what astronauts experience on the International Space Station – 22 millirads per day, which works out to 8000 millirads (8 rads) per year. The spacecraft also detected 2 solar proton events, where radiation levels peaked at about 2,000 millirads in a day, and a few other events that got up to about 100 millirads.

For comparison, human beings in developed nations are exposed to (on average) 0.62 rads per year. And while studies have shown that the human body can withstand a dose of up to 200 rads without permanent damage, prolonged exposure to the kinds of levels detected on Mars could lead to all kinds of health problems – like acute radiation sickness, increased risk of cancer, genetic damage, and even death.

27
Does India have plans to explore Mars after Mangalyaan?
1
Could Schiaparelli's retroreflector array (still) be used?
2
are there any posters available with all astronauts/cosmonauts?
0
Are there studies on human Mars missions available?
3
Expected differences between concrete prepared on the ISS and matched samples prepared on Earth?
6
Could Martian soil be used as material for a 3d metal printer?
3
Are there any photos of the Martian terminator from low Mars orbit?
17
Are launch windows to Mars avoided if they result in landings during dust storm season?
7
Are there any studied landing sites on Mars for a crewed landing?