Here it comes! 2012 TC4 has been re-acquired and its orbit revised; at over 50 million km, how was this done?

This excellent and under-up-voted answer describes the calculation of the probabilities of closest approach to Earth of the NEO 2012 TC4 in October 2017. This comment noted that TC4 has recently been re-acquired (observed) and its orbit and predicted closest approach have been updated.

I downloaded the new data in JPL Horizons and plotted it below. I also looked at the JPL Small Body Data Browser for 2012 TC4 and I can see that while the predicted nominal distance of closest approach is now a bit closer, the minimum predicted distance of closest approach is now much closer to the nominal. In other words, with the new, August 2017 observations the uncertainty has been greatly reduced.

How was this observation made? Horizons shows that the most recent observational data is from August 5, 2017. On that day 2012 TC4 was about 52 million km from Earth. This is much too far to be radar, so it must be an observation from a visible or infrared telescope.

Question: How was this observation made and what instrument was used? Did it turn up in a routine survey by accident, or was there a specific, directed effort to look for it? I ask that because for this object the uncertainty in the orbit brought it potentially quite close to Earth!

below: Predicted paths for 2012 TC4 (two red, nearly straight lines), Moon (green, arc segment on opposite side) and the Earth (blue dot in center) plotted centered on the Earth-Moon Barycenter in ecliptic coordinates. Dashed line is the Horizons data back in May 2017, and shows a closest approach of about 90,000 kilometers, so it's even older than the "Old" closest approach data in the Small Body Data Browser. Dots on the new TC4 prediction (solid, red) are spaced every 2 hours.

I set up the Horizons web page like this, downloaded the state vectors for each body (and the Earth-Moon barycenter) and then subtracted each from the barycenter before plotting: 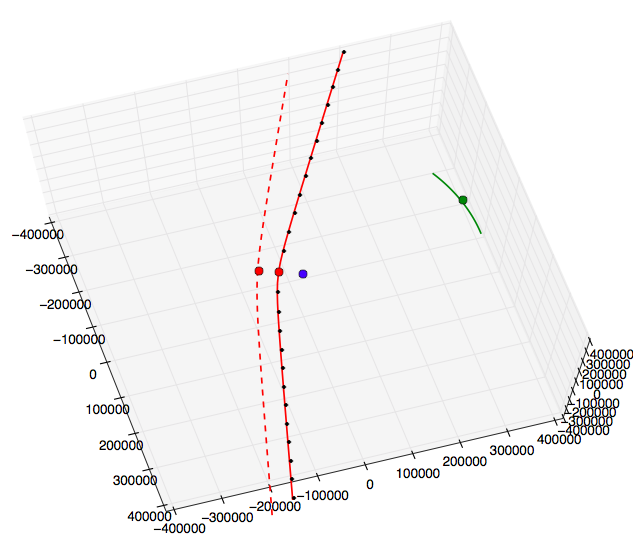 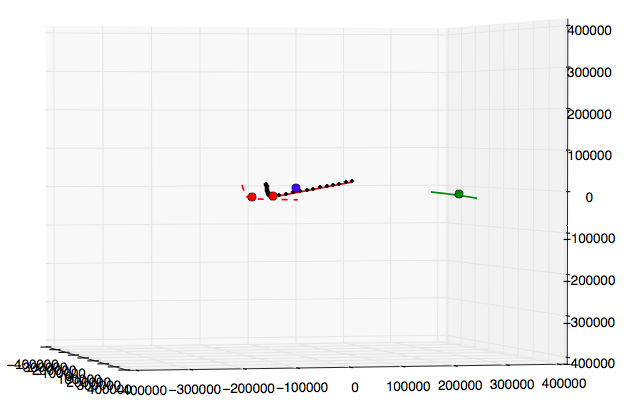 As reported on the Minor Planets Mailing List, 2012 TC4 was recovered by the European Southern Observatory's Very Large Telescope in Chile. Here's their reported astrometry data. According to the ESO's announcement, the observation at apparent magnitude 27 is the faintest near-earth asteroid so far measured. 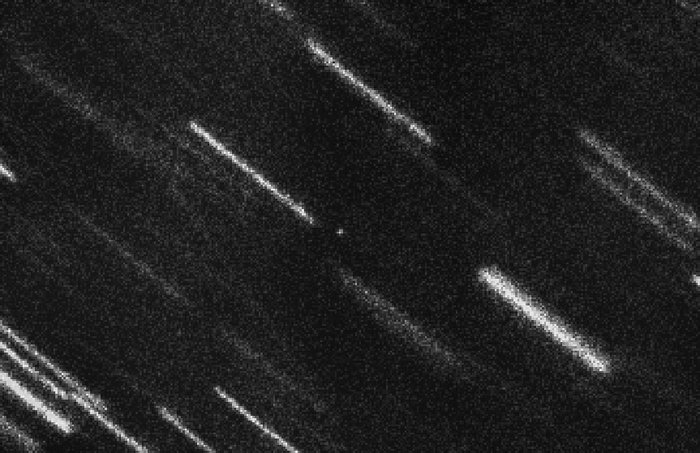 In the above stack of (37) 50-second exposures, 2012 TC4 is the dot at the center. The stack tracks the asteroid's motion, leaving the background stars etc as trails.

The FORS 2 (FOcal Reducer and low dispersion Spectrograph) instrument was used. Although I can't find an explicit statement saying so, it is almost certain that this was a directed search since this observation is close to the limiting magnitude of the instrument, and furthermore FORS2's field of view is only 6.8 x 6.8 arc minutes.

Not the answer you're looking for? Browse other questions tagged near-earth-asteroid 2012-tc4 or ask your own question.