NASA has been working on demonstrations of laser communication with satellites. The motivation is simple, in that lasers see less power loss because they spread over a smaller angle. That raises the question, what is the angle over which they spread?

Going by laser physics fundamentals, it seems that for our purposes any Gaussian beam can be effectively taken to be waist-less. By that I mean, the area of the beam at the target distance will be literally the solid angle time the distance. 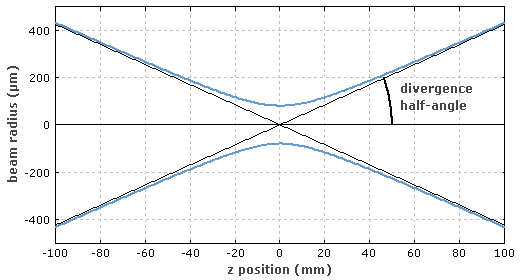 There is some information on the Lunar Lasercom Ground Terminal (LLGT) (archived page, link isn't working due to govt shutdown?), but none of these specs relate to the divergence angle. Laser pointers you can buy in stores can be 1-3 mrad, which sounds small, but it's really not. Such a beam is literally half the diameter of the moon. A tighter beam introduces a tradeoff where it gets harder to aim, but preserves more of the beam intensity. I'm interested to know where, along that spectrum, modern space laser communications fall.

From @PearsonArtPhoto's answer here, he estimates a beamwidth of about $3.5~\text{$\mu$rad}$, or roughly $0.002~\text{deg}$ (unfortunately, his main source is also offline because of the government shutdown). He goes on to point out that this corresponds to an area on the Earth of about $4.9~\text{km}^2$.

While this does indeed levy a tighter pointing requirement, it's still about 10 times larger than typical absolute pointing accuracy seen in ground-based telescopes (about 1 arcsec).

Not the answer you're looking for? Browse other questions tagged communication probe optical-communication or ask your own question.

4
Can't we use laser transmitters instead of large radio dishes on deep space probes?
7
How much power loss does the LLCD suffer in transit?
5
Attitude requirements for inter-satellite laser communication