Is Cassini running out of fuel?

Once the final five orbits are complete, Cassini will plunge towards Saturn, with seven instruments turned on and reporting real-time measurements before its thrusters fail against Saturn's atmosphere.

This leaves the impression there will still be fuel in its tanks when Cassini burns up in Saturn's atmosphere, which does make sense: We want a controlled descent into the atmosphere in order to maximize the scientific data collected by the effort.

My question is - why make the final plunge on 15 September, in particular? Where Cassini was launched 15 October 1997, it's mission is going to end a few hours more than a month less than 20 years after it was launched. Is the fuel level so low that the mission couldn't have been extended one more orbit, so that the team could say their probe spent 20 full years in space before it was terminated?

I realize the mission lasted well over half a billion seconds, but gee whiz, couldn't we have made it to 20 years? Maybe I'm just being sentimental, "but to deny our own impulses is to deny the very thing that makes us human..."

To answer the question, 'is Cassini running out of fuel':

With three years left and only 2.5% of its loaded bipropellant and 37% of its loaded monopropellant remaining, the Cassini project actively manages the predicted end-of- mission propellant margins to maintain a high confidence in the spacecraft’s ability to complete the CSM as designed.

The Cassini project maintains contingency plans that seek to minimize impacts to future science activities and mission requirements in the event of bipropellant depletion. The contingency response are dependent on the date of bipropellant depletion. Using the results from the October 2014 prediction, of the 11% of cases that depleted the bipropellant, more than 95% of them would have little to no impact on future science activities or mission requirements.

The study contains graphs like the following, which show the amount of delta-V remaining: 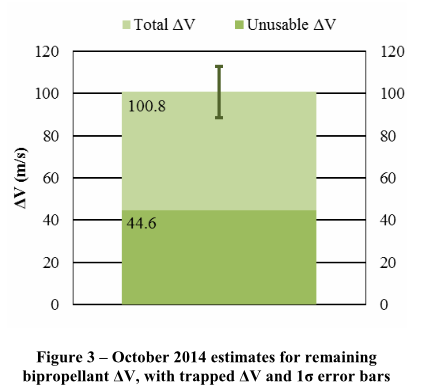 By October 2014, there was 55 m/s of Delta-V from the bipropellant thrusters remaining ± 15 m/s, so there's a significant error bar here. The same goes for the monopropellant system (which has larger reserves remaining).

The mission extension was designed to run nominal operations until after the next Saturn solstice (which happened on May 24, 2017).

The goal of CSM trajectory design was to maintain science observation opportunities commensurate with those in the PM and EM, while extending the mission to the next Saturn solstice in 2017, seven years away [4].

The solstice was the starting point for the Grand Finale:

As Saturn's solstice arrives, Cassini is currently in the final phase of its long mission, called its Grand Finale. Over the course of 22 weeks from April 26 to Sept. 15, the spacecraft is making a series of dramatic dives between the planet and its icy rings. The mission is returning new insights about the interior of the planet and the origins of the rings, along with images from closer to Saturn than ever before. The mission will end with a final plunge into Saturn's atmosphere on Sept. 15.

So the milestone NASA was looking for, was the Saturn solstice than a round number of Earth years since launch.

tl;dr: The September 15, 2017 end for Cassini is part of the second mission extension (XXM, or Solstice Mission) proposed in 2009. The plan was approved. 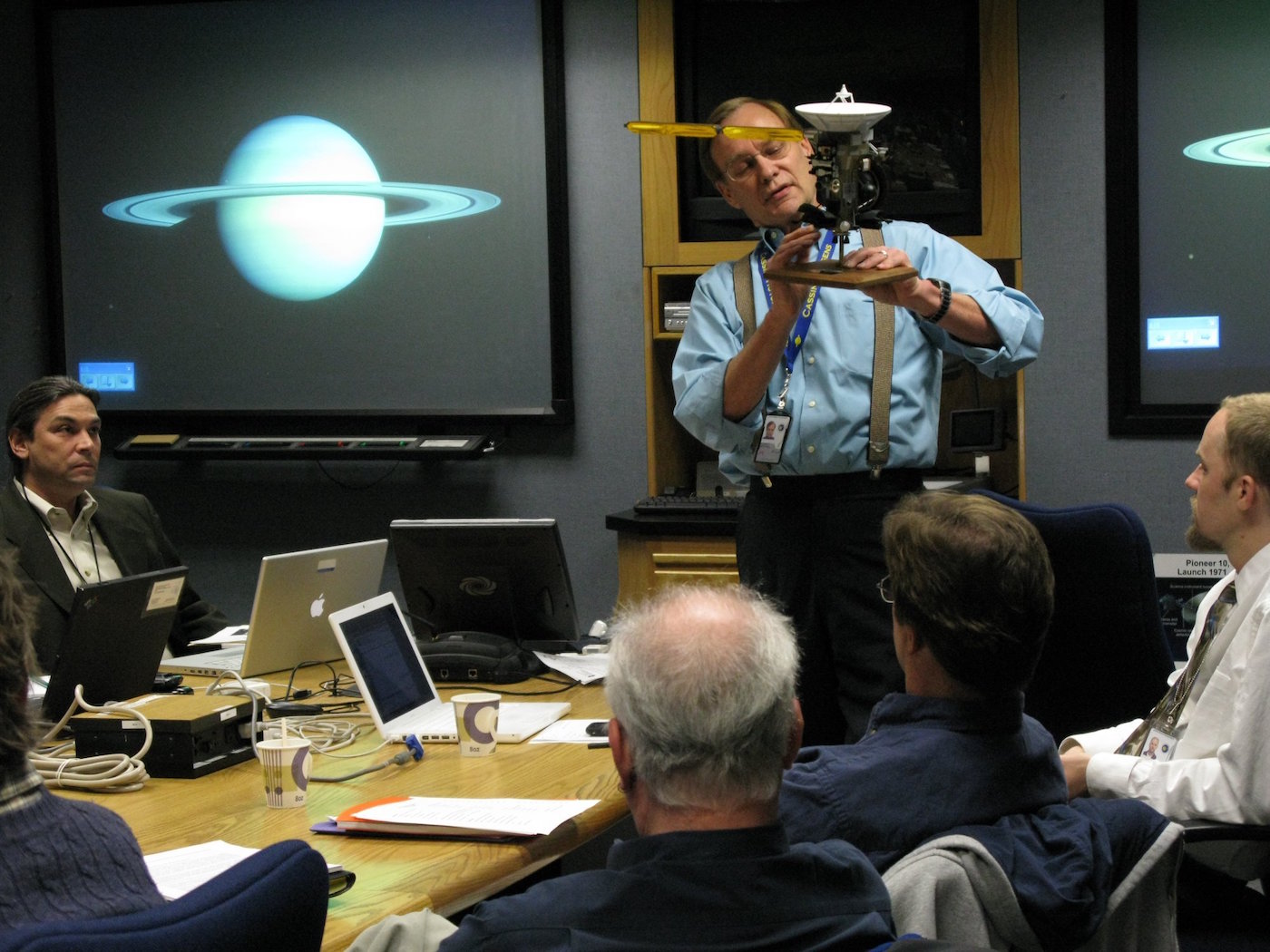 This excellent, concise answer to the question What force is bringing Cassini down into Saturn's atmosphere in another 145 days; drag, or…? describes how the whole thing is going down, both literally and idiomatically.

This is not like a de-orbit burn you might be imagining, it is a pair of highly choreographed gravitational assists from Titan flybys, lowering the periapsis enough to assure annihilation.

The Cassini mission has been incredibly successful in terms of both observation of Saturn and many of its moons at close range, and in a demonstration of orbital acrobatics.

Because of this amazing success, the Cassini mission has been extended twice already, at significant cost, in 2008 and again in 2010. See below.

More insight can be found in the 2009 John Spencer blog on The Planetary Society's website Cassini's Proposed Extended-Extended Mission Tour. The double encounters with Titan and burn up in Saturn's atmosphere on September 15, 2017 had already been planned and proposed and waiting for approval back in 2009:

It seems like no time since we selected Cassini's extended mission tour of the Saturn system, in early 2007. Now we're flying that tour, which extends Cassini's original four years in Saturn orbit for another 27 months, until September 2010. So now we're looking into the future- far into the future. If NASA approves the mission plan that was recommended by the Cassini project in late January, and if the spacecraft remains healthy, we hope to continue Cassini's exploration of Saturn for another seven years, until 2017. The ungainly working title of this planned new mission phase is the extended-extended mission, or XXM.

The year 2017 is special because May 2017 marks northern midsummer in the Saturn system, and the more elegant alternative name for the XXM is the Solstice Mission. A Saturn year is 29.4 Earth years, and the considerable 27 degree tilt of Saturn's pole (which, incidentally and bizarrely, can probably be blamed on the planet Neptune), means that the slow progression of the seasons has major effects, especially on Saturn itself and on its giant moon Titan.

The blog is extensive and informative and definitely worth a read. It further explains that the final orbits of Cassini started back in April of 2017. The difference between April 22 and September 15 2017 is 146 days, and the basis of the title of the question What force is bringing Cassini down into Saturn's atmosphere in another 145 days; drag, or…?:

Cassini will execute 20 of these close "F-ring" orbits before setting up for a final close Titan flyby on April 22, 2017. This flyby will do something astonishing: it will perturb the orbit so that Saturn closest approach jumps, in a single leap, from just outside the main ring system into the narrow zone of safety between the inner edge of the innermost ring (the D ring) and the planet itself, just 3,800 kilometers above Saturn's cloud tops. Cassini will continue to thread this needle for 23 orbits (called, with some understatement, the "proximal" orbits) until a final distant nudge from Titan on September 11, 2017 delivers the death blow, altering the orbit just enough to drop Cassini into Saturn on September 15.

There remains one major hurdle before we can put these plans in motion: money. Cassini will need another seven years of funding, and NASA has many other claims on its budget. To sweeten the deal the Cassini project has found ways to simplify operations by concentrating efforts on the highest-priority science, and it looks like we can run each year of the XXM on considerably less money than we need to maintain the more hectic pace of the prime and extended missions. A couple of weeks ago I participated in a "Senior Review" at JPL, where we made the scientific case for the XXM to an external panel of scientists. The panel will pass on their recommendations to NASA headquarters, and we will wait more-or-less patiently for the final decision. In the meantime, we have lots of preparatory work to do to flesh out the details of the XXM. If and when we get the go-ahead from headquarters, we will be ready.

And for balance, from Wikipedia:

On April 15, 2008, Cassini received funding for a 27-month extended mission. It consisted of 60 more orbits of Saturn, with 21 more close Titan flybys, seven of Enceladus, six of Mimas, eight of Tethys, and one targeted flyby each of Dione, Rhea, and Helene. The extended mission began on July 1, 2008, and was renamed the Cassini Equinox Mission as the mission coincided with Saturn's equinox.

A proposal was submitted to NASA for a second mission extension (Sept 2010 – May 2017), provisionally named the extended-extended mission or XXM. This ($60M pa) was approved in Feb 2010 and renamed the Cassini Solstice Mission. It includes Cassini orbiting Saturn 155 more times, conducting 54 additional flybys of Titan and 11 more of Enceladus.

Ultimately, the answer is no, Cassini did not run out of fuel:

At the end of its mission, Cassini had used 6504 pounds out of 6565 pounds (2950 kilograms out of 2978 kilograms) that it had started with. Thus, there was about 61 pounds (28 kg) of fuel still on board when Cassini entered Saturn's atmosphere on 15 September 2017. Although the referenced page doesn't indicate the distribution of the available propellant between the various systems that use it, there was probably enough fuel available so the mission could have gone on for another orbit or so. However, the amount of science that could have been performed in "a few more orbits" before the fuel ran out vs. the unique perspective achieved through the end-of-life "Grand Finale" that was followed made the latter choice clearly advantageous. In addition, leaving the probe in orbit around Saturn would have risked contaminating the environment much more than burning it up in the atmosphere contaminated Saturn. Thus, spending fuel to crash Cassini into Saturn rather than using orbital mechanics would have limited the amount of time the mission could have been extended, further adding to the attractiveness of the selected option.

As others have pointed out in their excellent and extremely informative answers, orbital mechanics were a much more dominant factor in deciding when the Cassini mission would end, rather than the available fuel.

In any case, it's much better to have some propellant left over when a mission ends, rather than running out before the [extended] goals were achieved: From this distance, topping off the tanks just isn't an option. It's far better to have "too much" than too little.

Not the answer you're looking for? Browse other questions tagged saturn cassini fuel-system or ask your own question.

9
How was Juno's arrival set up to be on the evening of July 4th?
9
What force is bringing Cassini down into Saturn's atmosphere in another 145 days; drag, or...?
5
What spacecraft has had the greatest total propulsive delta-v?
4
Was the time of Schiaparelli's landing chosen specifically so the Giant Meter Wave Radiotelescope could listen?
7
Unravelling Cassini's "ball of yarn" orbit around Saturn, tabulation of propulsive maneuvers?

10
How long will Cassini survive its dive into Saturn's atmosphere?
9
Why would Cassini need to reach 64 degrees inclination before "threading the needle"?
1
How will the Cassini spacecraft help constrain the mass of Saturn's rings?
5
Will Cassini contaminate Saturn?
4
Photographs and Videos "of" Cassini
3
What video or imagery was captured onboard Cassini during its descent into Saturn's atmosphere?