Propagation of AM and FM radio signals up into the sky would behave differently than propagation along the surface of the Earth.

As a Gedankenexperiment, if you were on the ISS and had an AM/FM radio sitting at the ISS' cupola window, what would it sound like as you slowly tuned through one of the bands? Would it be packed full of stations competing at each frequency, or would it be nearly empty with only an unusually strong station making it through. Naturally AM and FM should be discussed separately.

If you were hoping to catch a particularly weak AM or FM station, would you arrange to listen when you passed overhead, or would a different pass be best?

above: from the Radio Jove Project's exercise The Effects of Earth's Upper Atmosphere on Radio Signals. 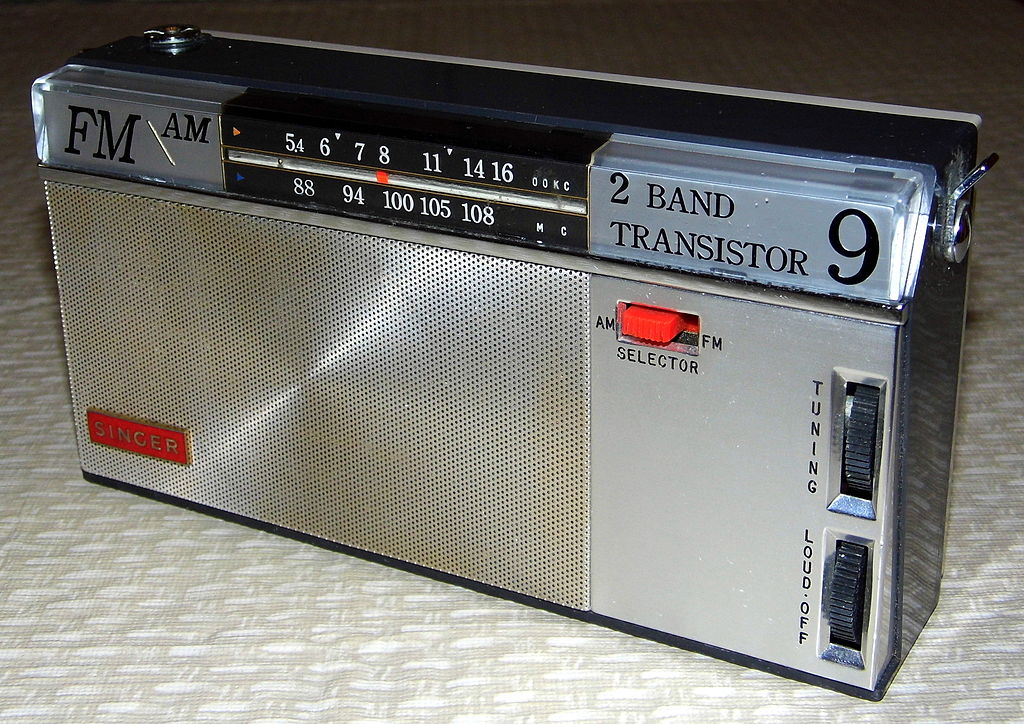 above: Vintage Singer 9-Transistor Radio, AM-FM Bands, Model HE-229, Made in Japan. From here.

TL;DR: Based on the below information, and given 4 assumptions, the maximum number of stations one could legibly hear would be 42 or less.

Not sure if there is a factual answer to this question. But as the OP has indicated a "Gedankenexperiment" as the basis of the question. We may theorize, how many stations you can receive.

Lets concentrate on the FM broadcast band, which in many countries goes from 87 MHz to 108 MHz, some countries lower, and some countries higher. However, looking at the picture of the proposed radio receiver, I think this is the band we need to concentrate on. These frequencies are not reflected by the Ionosphere back to earth, so we are good to receive them.

It is mentioned in the comments, that the main broadcasting antenna's will have their main directivity pointed to their intended audience, which certainly is not up to the Ionosphere, but horizontal, parrallel to ground, or even in a downward angle.

However RF is a strange beast, and antenna's are far from ideal. Most antenna's will have something which is called "side lobes". And it is in theory possible that some of these side lobes are pointing more upwards, with a larger angle, therefore some of the signal is "going into space".

As the ISS is roughly 406 km above earth, the radius of earth is about 6371 km, it is simple to calculate the theoretical area which is "visible" from the ISS.

Which brings A to about 3%.

This brings us to:

From here it is guessing, as factual calculation is not possible.

Now, some more information, there seems to be 44,000 radio stations in the world, well if you believe the source, as the deep link seems to be gone.

Lets say that these staions are equally distributed on the surface of the earth [assumption 2], and 3% of that is visible. This will bring the number of visible stations to 1056 stations.

The afore mentioned side lobes are not all directly pointing to the ISS, it is a bit of hit-and-miss, so lets apply a 20/80 rule on those [assumption 3], which now brings the number of receivable stations to 211.

Now, the band we have chosen is 87 MHz to 108 MHz, and with a 200 KHz bandwidth for an FM station, this means that there are 105 possible "slots" for non-overlapping broadcasts.

These "slots" are actually the most limiting factor. The stations will not be evenly spread, many will have "popular sounding frequencies", and overlaps will happen. For this purpose lets apply another 20/80 rule to the equation [assumption 4]. Which will bring the number down from 211 to 42.

Suppose you take the radio receiver as indicated, and "tune" in to a station which is receivable. The fact that the ISS is traveling at an orbital speed of 27000 km/h, it would mean that the received signal is influenced by a doppler effect. You will have to tune higher when approaching the transmitter location, constantly lowering the frequency during your listening experience. It is debatable if the estimated 2.6 kHz drift doppler will introduce, is significant or not. The radio receiver used may even have an AFC circuit which may correct this.

Based on the above information, and given 4 assumptions, the maximum number of stations one could legibly hear would be 42 or less.

Since most of the answers discuss FM broadcast signals, let's look at AM broadcast signals as well, and discuss propagation throughout the radio spectrum. I am speaking as an Amateur Radio hobbyist, and junior-level Electrical Engineering student.

We have to remember that AM and FM are merely methods of modulation. However, these methods of modulation are used in broadcasting at profoundly different frequencies. When the AM Broadcast band (500kHz to 1600kHz) was standardized, few could conceive of transmitting or receiving signals several orders of magnitude higher in frequency in what is now known as the FM Broadcast band (97MHz-107MHz).

Signals at these very different frequencies behave in profoundly different ways. These differences are often taken advantage of by radio hobbyists to try to get a signal to different places.

At Medium Frequencies (MF) (roughly 400kHz - 2MHz) signals will almost certainly either be absorbed by the D layer of the ionosphere, or be reflected by the E layer. Thus we can conclude that you would likely not hear any AM stations at the ISS.

High Frequency (HF) waves (roughly 2MHz-30MHz) are sometimes reflected by the F layer of the ionosphere. This depends on the level of ionization caused by the sun. Currently we are at a very low sun spot cycle, so it is quite likely that you could hear some HF signals at the ISS.

At Very High Frequencies (VHF) (roughly 30MHz-300MHz) which contain the FM broadcast band, signals will most certainly penetrate the ionosphere, and could be heard by the ISS. The 10-meter amateur radio band (29MHz) is sometimes used for satellite communication which would require penetration of the ionosphere and much more. VHF signals do sometimes skip however, during times of extreme ionization, or when they encounter anomalies such as an Aurora.

In general, the higher the frequency, the more likely it is to be heard by vessels in space. This is why microwave frequencies were employed by Apollo for communications at 2.2GHz.

The power of FM transmitters and the sensitivity of FM recivers are optimized for a range of some 10 km for local transmitters and up to 200 km for transmitters on a mountain. But if a wave goes horizontal from a transmitters antenna straight to the ISS in 400 km above the surface it has to travel a very long distance. Using the formula of Pythagoras gives a distance of 2292 km, that is a loss of about 21 db when compared to 200 km. Too much for a simple FM receiver without a high gain directional antenna and without a low noise preamplifier.

If the same frequency is used several times in the circle with 2292 km radius, receiptiom may be disturbed.

In recent years, this has changed to give transmitters more freedom as long as they don't interfere with others. And other countries have different rules.

In the FM band, transmission is line of sight, so you can see far more stations from the ISS than on the ground. This increases the chance of collisions where two stations transmit on the same channel.

So on the ISS you can potentially receive 100 stations, in practice it'll be a lot less due to interference.

Not the answer you're looking for? Browse other questions tagged iss radio-communication audio or ask your own question.

25
Does the International Space Station get TV?
4
Have deep-space spacecraft always used some form of spread-spectrum for data downlink?
1
What are some objective that CubeSat's can complete/have completed?

5
Approximate sizes and relative positions of the ISS' cupola windows?
11
What are the two orange tabs stuck on opposite edges of each window of the ISS cupola?
13
What is Earthy controlling in the ISS cupola?
4
How many people could the ISS support?
5
How many time-zone does the ISS cross through during one orbit?
4
Why are deep space “beacons” usually UHF, so low (in freq) that DSN can't hear them? And how unusual is it for a Mars lander to have an X-band beacon?