What ever happened to SHERPA?

Today SpaceX will (presumably) finally launch Formosat-5. However, while it was originally planned to share the launch with SHERPA this did not happen.

What ever happened to SHERPA and all the cubesats that it was planned to deploy? I believe there was supposed to be room for both, and I thought the whole thing had been ready and waiting for launch for a while.

For a better description (and a nicer image), read this excellent answer and this question.

The 2015 SHERPA mission addresses the limitations of current launch configurations by maximizing the number of payloads integrated to the structure. The SHERPA concept is well suited to support small spacecraft that range from CubeSats to 300 kg minisatellites. By developing unique adapters for the standard ports, Spaceflight has enabled many different sizes of spacecraft to deploy from SHERPA, including the DARPA eXCITe microsatellite, built by NovaWurks Inc. of Alamitos, CA (NovaWurks is a wholly owned subsidiary of Spaceflight Industries, Inc., Seattle) and two BlackSky Global Pathfinder satellites. Future planned configurations involve multiple SHERPA rings on a single launch, as well as support for much larger spacecraft on the forward section of the SHERPA ring.

NOTE: It now seems that NovaWurks is now a privately held, autonomous company and not a subsidiary as the block quote suggested at the time it was published. 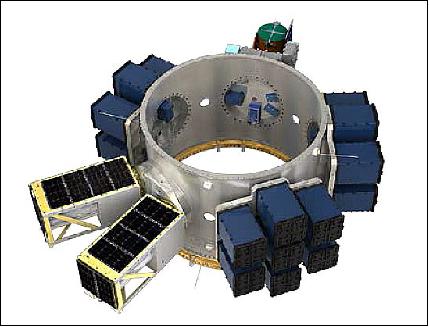 According to this article, it's because of the delays

In a March 2 message, Curt Blake, president of Seattle-based Spaceflight, said that “significant” delays in the planned launch of the Formosat-5 mission on a Falcon 9 from Vandenberg Air Force Base in California forced the company to find alternative rides for nearly 90 satellites that were to launch as secondary payloads on a payload adapter called Sherpa.

“We learned our launch would occur potentially much later than expected,” Blake wrote, not giving a specific launch date. “While delays are inevitable in the launch business, we made the decision to rebook all our customers slated to launch on the FormoSat-5 mission.”

and the cubesats are being moved off to various different launches,

Spaceflight spokeswoman Jodi Sorensen said March 2 that most of the satellites that had been flying on Sherpa will be rebooked on one of two launches. One is on the company’s own dedicated Falcon 9 mission, dubbed SSO-A, scheduled to launch from Vandenberg later this year. The other is an unspecified “international launch” scheduled for this summer or fall.

As for Sherpa itself, Sorensen said it could fly on the SSO-A mission or another launch with a different set of satellite payloads. “It’s completely flight ready, so if we can, we’ll definitely use it,” she said.

According to this article, SpaceX's schedule delays motivated Spaceflight to find other launches for the payloads that would've flown on SHERPA. One launch is a dedicated Falcon 9 launch titled SSO-A, currently scheduled for early 2018. The other launch is an unspecified international launch; I don't believe any details have been announced since that article was written.

There were reports that initially Sherpa had issues getting all the payloads ready at the same time, causing some delays in the launch, beyond SpaceX manifest issues.

Then once the SpaceX manifest issues and delays got to much for them to accommodate they moved the payloads off to various other launchers doing small sat launches.

In some ways, the ability to handle delays and find alternate launchers is actually a good sign. It means there is flexibility in the market which is good news.

Not the answer you're looking for? Browse other questions tagged sherpa or ask your own question.

12
Are cubesats deployed with fully discharged batteries? Even those on Sherpa?
3
What is this “space ring”? Is it SHERPA or something new, or just “art”?
2
How will Sherpa and Formosat-5 be configured as payload and launched?
0
News of eXCITe with QIKcom-2 and SeeMe, have they been launched, or is there currently one scheduled?

2
How will Sherpa and Formosat-5 be configured as payload and launched?
12
Are cubesats deployed with fully discharged batteries? Even those on Sherpa?
4
What happened to Formosat-4 and Formosat-6?