If there was a non-rotating skyhook in Earth orbit, what would re-entry be like after dropping from its foot?

I have been looking at a space station that orbits Earth at an altitude of 3500 km above the equator, and has tethers that extend from it downwards to 250 km above the surface, and outwards to 6500 km altitude - a non-rotating skyhook. Right now I'm considering what would happen if a Dragon or Soyuz type re-entry capsule was dropped from the foot of the lower tether and returned on a ballistic trajectory.

I used the Tether Tool (written by our own Hohmannfan) to find the velocity of the foot. It was written first for the Moon and the rest of the solar system has recently been added to it. Don't forget to change the selection to Earth at the top.

The station at 3500 km altitude rotates with a period of 2.711 hours. At the foot (altitude = 250 km), this corresponds to a speed of 4.26 km/sec, or about half of the re-entry speed of a satellite from LEO. Since it's moving in the same general direction that the atmosphere is rotating, the speed relative to it is about 0.5 km/s less than that. Assume this is all in the plane of the equator.

A Dragon 2 weighs 6400 kg empty. If it was returning one person perhaps it's fair to increase that to 6500 kg. On such a steep descent, would it need to have a larger area facing into the wind, (perhaps an inflatable decelerator)? What sort of descent time would be involved before the parachutes deploy, if it was set up to slow properly? What would be the peak deceleration?

Together, that is maybe a lot to ask. It seems like it all belongs together. All input appreciated.

Related question: Roughly what is the rate of energy loss of survivable capsule re-entries?. (New) 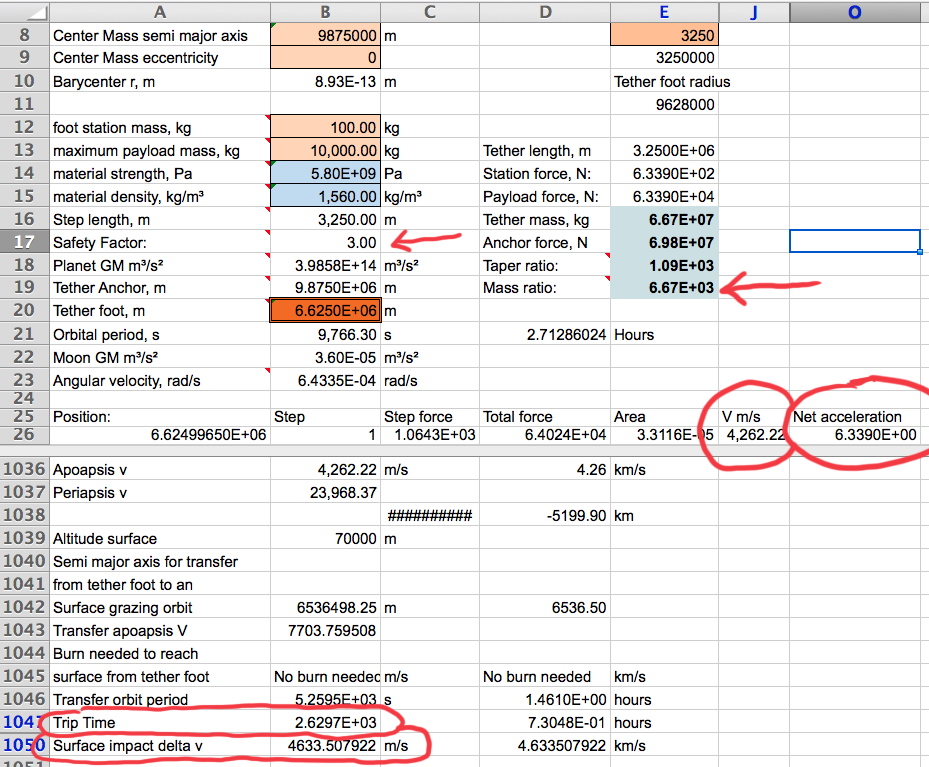 The numbers you cited match mine fairly closely. A very nice tool Hohmann fan has made available. I intend to link to his page from several of my tether blog posts.

The bottom of the spreadsheet answers some of the your questions. I called 70 kilometers the altitude where the craft starts serious aerobraking. Which is just a guess, to be honest.

The ship would be moving 4.6 km/s at that altitude. It would 7.3e-1 hours to reach this altitude which comes out to 43 minutes.

Scratch that - it is a mistake. Thank you for calling that to my attention, uhoh. The bottom of the spreadsheet was a transfer orbit from a 250 km apogee to a 70 km perigee. But in this scenario perigee is well below earth's surface and the ship re-enters well before perigee.

Here is a pic of Kim's scenario: 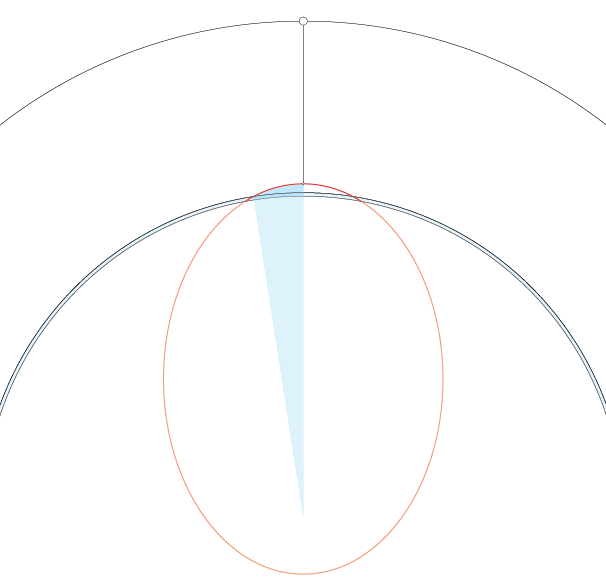 The eccentricity of the suborbital ellipse is .698. Semi major axis of that ellipse is about 3902 kilometers. Given that semi major axis, the period would be 2425 seconds.

But only a fraction of that period is swept out from release at apogee to atmospheric entry at 70 km. That fraction of the ellipse is shaded blue.

To get area of the fraction of an ellipse swept out, Kepler scaled the ellipse to make it a circle. Which is what I did. I also scaled radius of our circle to 1 to eliminate some arithmetic. 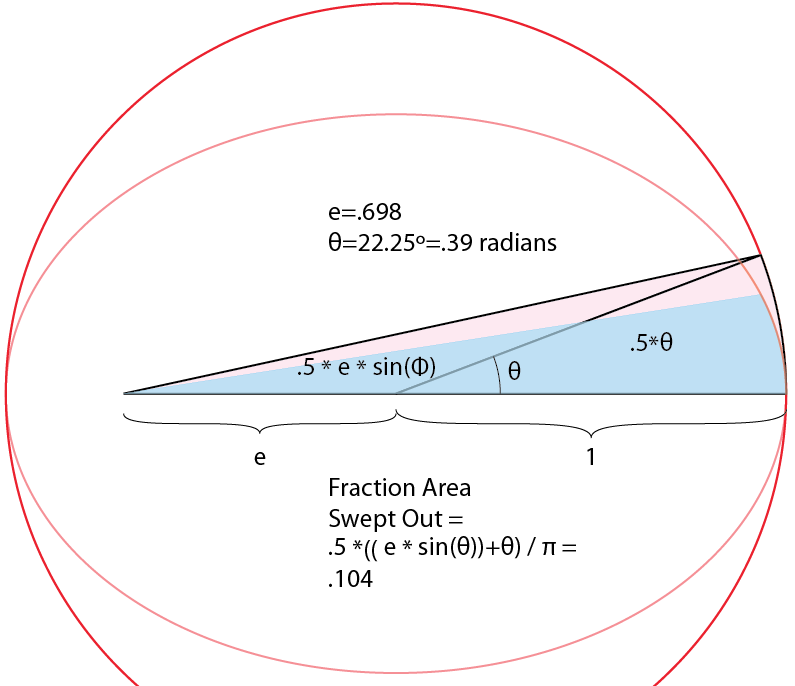 To get area swept out, Kepler would add area of a triangle and a wedge. Which is what I did above. In this case a little more than 1/10 of the ellipse.

After release from a 250 km altitude, the spacecraft would start serious aerobraking in about 4 minutes.

The short path from a 70 kilometer altitude to earth's surface doesn't give much time to shed the 4.64 km/s velocity.

I whomped up a first order Runge Kutta model of this drop from the tether foot at a 250 km altitude to earth's surface. A few different scenarios:

Dropping in a Vacuum

This is within about 4% of what I got using Kepler's method to get time of flight and the Vis Viva equation to get speed at 6378 km (earth's radius).

Here Max Q is less than 90 kilo pascals. This may be acceptable.

I don't know what how to figure heating.

If made of Zylon with a safety factor of 3, the lower tether would have a taper ratio of about 1090. Tether mass to payload ratio would about about 6,670.

I think with that great length it would have a large enough cross sectional ratio that impacts would be inevitable in the LEO volume which has lots of debris and satellites. As much as I love vertical tethers, I don't believe they could survive close to earth.

A rotovator might be a way to catch suborbital flights as well as release re entering craft into the atmosphere at suborbital speeds. John Carmack has already tweeted to Musk if he can land a booster on an ocean platform, he should be able to rendezvous with a rotovator. Musk agreed, sort of.

tl;dr Everyone will die within five minutes. Your plan is a non-starter. You must consider letting go from a much lower altitude, or higher forward velocity, or convert your capsule into a spaceplane the likes of which do not yet exist.

These should be compared to values from survivable reentries.

In all cases the capsule hits the ground in roughly five minutes. If the Earth were flat that would be a bit less; the curvature buys you some extra seconds. You could even ballpark the fall time with:

The problem is that it's dropping for nearly 200 km before it hits enough air to really start losing energy. It would be better to let it go in the ballpark of 100 to 80 km so it can get rid of a lot of energy before it starts sinking too fast and the air gets too dense. 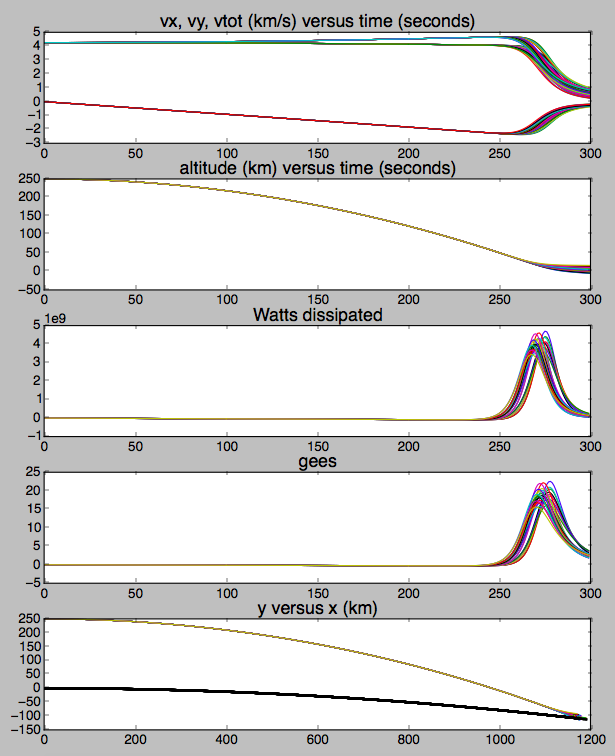 43
Why didn't the Space Shuttle bounce back into space as many times as possible so as to lose a lot of kinetic energy up there?
22
Why can't you just parachute down right from orbit?
8
What would the damage radius be if a Falcon 9 booster impacted the Earth without a landing burn?
4
Modeling a rocket using Tsiolkovsky's equation and ordinary differential equations
3
Would it be possible to avoid the heat-from-friction problem when re-entering the atmosphere by performing (vertical) "U-turns"?
4
With what attitude does Soyuz reenter, and in what way might this angled pattern on Exp. 53's return a result of attitude?
3
Do reentering capsules always make a(n Earth-shattering ka-)boom and look like a fireball if at night? Time & epicenter predictable w/ public info?
4
How do I calculate re-entry velocity when decaying from a circular orbit?
2
Roughly what is the rate of energy loss of survivable capsule re-entries?
2
Why not bring a rocket to idle velocity for less violent and safer re-entry?
See more linked questions

51
How possible are 'space jumps'?
9
Re-entry from Moon vs. re-entry from low Earth orbit
5
What would be the challenges of a non-rotating tether orbiting the Moon?
8
How to calculate drop due to ship docking at orbital tether
3
What forces a spacecraft, returning from Earth orbit, to synchronize with Earth spin?
8
Galileo Probe Altitude Data
4
Why was ISRO's CARE reentry demonstration at 5300 m/s so slow?
3
Did the Apollo Command module really "skip" within, or off of the atmosphere as a part of its reentry program?