The screen shot and block quote below are from Oribal ATK's Mission Update: Minotaur IV ORS-5 Launch. ORS-5 or "SensorSat" is a technology demonstration for a class of satellites that will sit in LEO and keep an eye on the GEO belt for any "debris" which I suspect means pranksats or worse. ORS-5 will sit in a 600 x 600 km equatorial LEO.

The graphic suggests that after stage 5 (Orion 38) burnout and payload separation, the velocity will be 7.05 km/s and the altitude 600 km and that checks out; the sidereal rotation speed of the Earth-Fixed frame at this altitude is another 0.51 km/s. That means the speed of the orbit in inertial coordinates is 7.05 + 0.51 = 7.56 km/s.

Orbital ATK's Minotaur IV space launch vehicle will launch the ORS-5 mission for the U.S. Air Force as a part of the Orbital/Suborbital Program-3 (OSP-3) contract. ORS-5, also known as SensorSat, is designed to scan for other satellites and debris to aid the U.S. military’s tracking of objects in geosynchronous orbit. For the ORS-5 launch, the Minotaur IV will use two Orion 38 upper stage motors. The final Orion 38 motor burn will reduce the angle of the ORS-5 satellite’s orbit, redirecting the spacecraft to equatorial orbit.

I'm curious what "angle" means in last sentence, and guessing that it means inclination. For such a light satellite (something like 110 - 140 kg) would the standard thrust of the Orion 38 happen to provide just the right amount of delta-v to change the inclination to equatorial? Since the table shows the velocity unchanged during the 5th stage burn, it seems all of the thrust should be perpendicular to the direction of motion and purely for inclination change.

Question: Could someone help to estimate the change in inclination angle that an Orion 38 can provide this satellite, starting with the specs in English units :-( and see if it's even in the right ballpark for this launch?

Approximate mass of the payload:

Approximate mass of the Orion 38: 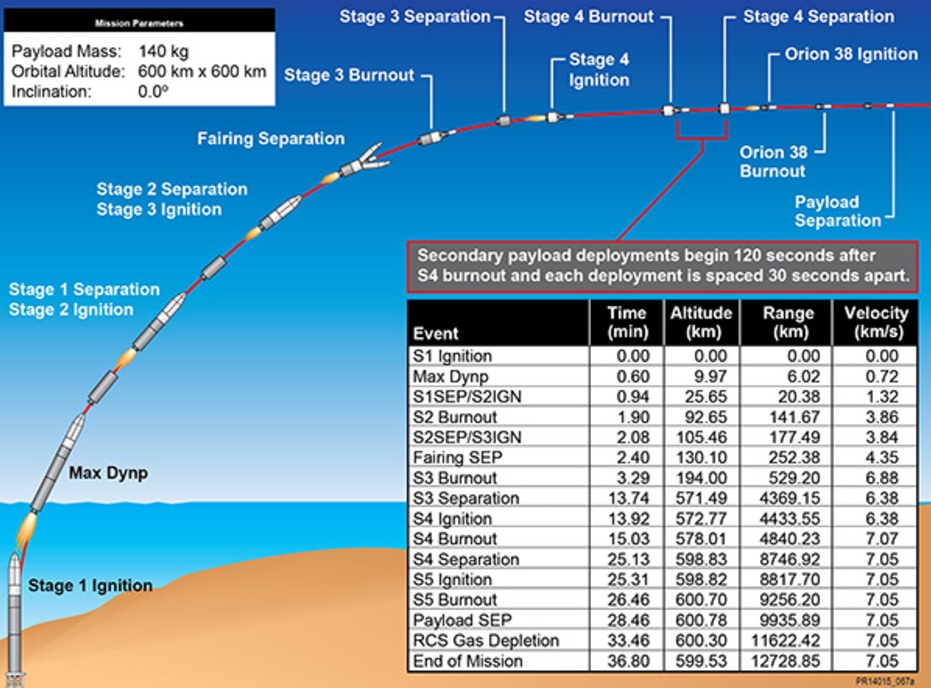 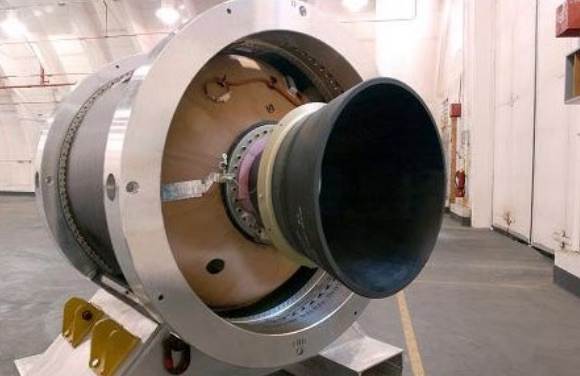 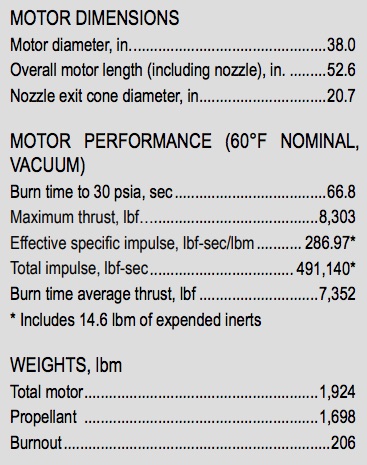 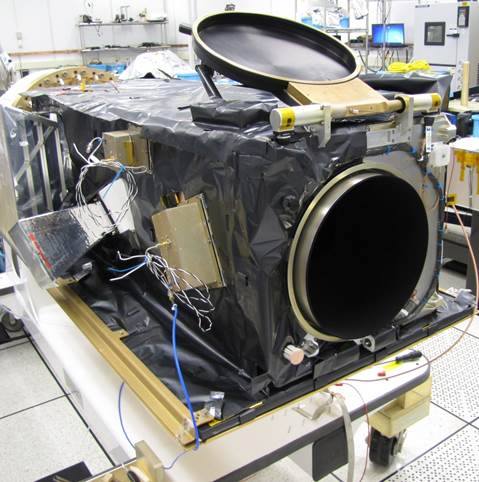 If all that ∆v is applied perpendicular to the circular orbit, we get a pure inclination change maneuver; our circular orbit velocity at 600km is 7558 m/s, so:

If you throw in a little extra unaccounted mass, e.g. a payload adapter between the Orion 38 and the satellite, the rocket equation figure might come out closer to 4000 m/s; this still gets you about a 30º inclination change.

As either of these figures is greater than Cape Canaveral's 28º latitude, it's sufficient to push the satellite into equatorial inclination. I assume the rocket was initially launched to just the right inclination for the Orion stage to cancel, and did the correction burn while crossing the equator early in its first orbit. Launching to an initially higher inclination effectively sacrifices a tiny bit of the "free" velocity you get from Earth's rotation in exchange for not having to do anything excessively clever with the Orion 38.

I note also that while the velocity figure is unchanged across the 5th stage burn, the altitude goes from 578 km at 4th stage burnout to 600 km at 5th stage burnout; if the final orbit of the ORS-5 is in fact 600km circular, then the Orion 38 stage must be doing some circularization as well as plane change.

10
How are SRBs and solid rocket motors transported safely? Do they ever end up on trucks driven down public highways?
8
How does one dogleg from Florida to a sun-synchronous orbit?
6
How rare is it in the 21st century to use five stages to get to LEO, especially for a low-mass payload?
-6
What regulations, agreements, or other forces can help mitigate "PrankSats"?
2
Biggest orbital inclination change done in Earth's orbit

8
Can a solar sail craft change an orbit's inclination (from polar to equatorial)?
9
Why would Cassini need to reach 64 degrees inclination before "threading the needle"?
3
Inclination change to Geostationary Orbit
6
Best time to perform an orbital inclination change — during ascent, or once in circular LEO?
6
How rare is it in the 21st century to use five stages to get to LEO, especially for a low-mass payload?
6
Help choosing a gravity assist scenario for this problem
15
Why is it most efficient to change orbit inclination while crossing the equator?
7
Why (the heck) did Tianwan-1 insert into a low inclination orbit then execute a plane change from 11.8 to 86.9 degrees?