Can we detect the projected ISS shadow on the earth surface?

Looking at an ISS transit picture: 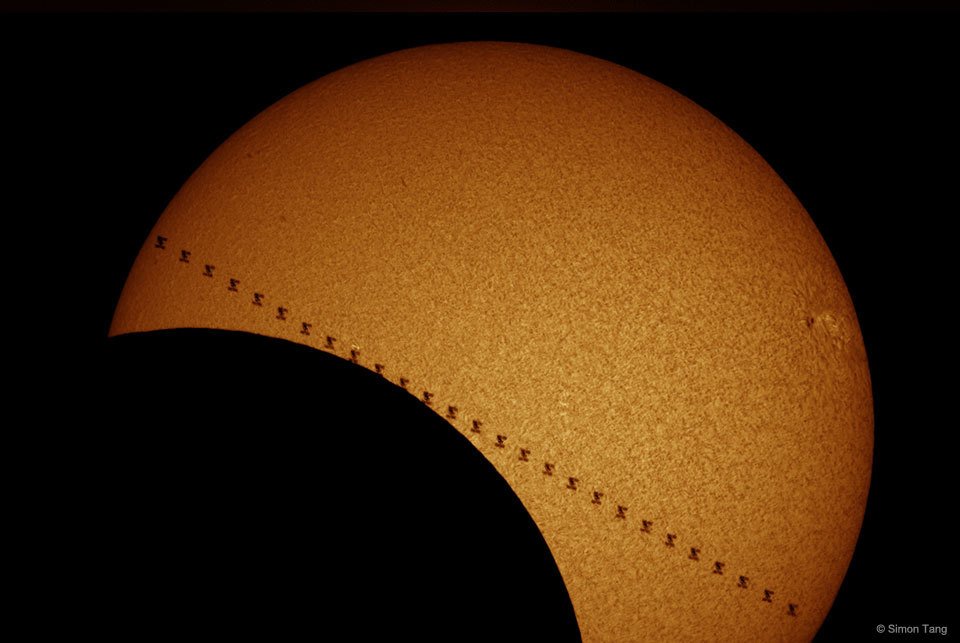 I started wondering wether we could see the ISS shadow passing on the earth.

My intuition tells me that it would be impossible with the naked eye, but do we have any instrument able to detect it ?

iss sensors
Share
Improve this question
edited May 6 '20 at 3:01

TL;DR; Yes! Use a Raspberry Pi, a square millimeter photodiode, a low cost ADC and some DC and high frequency rejection with a quad op-amp and passive components.

Best possible case the ISS presents about 3200 square meters of occulting area. Since the solar panels move in various ways, let's also consider half of that, or 1600 square meters.

The shortest distance an observer on earth can be from the ISS is 400 km. Let's use 600 as a typical value (within 45 degrees of the zenith).

With a quantum efficiency of 0.5 and average photon energy of 2.5 eV, that's 6E+14 photoelectrons per second or about 100 microamperes.

The transit takes at least 0.5 seconds, so that's at least 3E+14 photoelectrons. The statistical variation on that is 1/sqrt(N) or only about 6E-08; in other words with a shaping time of the order of a half-second, the statistical noise will be about 0.1 parts per million, or far below the expected size of the signal in a 1 square millimeter photodiode!

So the task is to detect a rectangular drop in sunlight of the order of 7E-05 to 3E-04 for about a half second. This would be on a 100 uA signal from a photodiode, which would be 10,000 time bigger than shot noise.

You could do this with a photodiode and a Raspberry Pi, but you would have to reject signals with frequency lower than say 0.5 Hz (including rejecting DC) so that you could use a hobby-quality ADC. Take some time to design your filter to make sure the high frequency gain (above several tens of Hz) is also restricted - don't just use a differentiator or all you will be digitizing is high frequency noise. Make sure to sample at fairly high frequency, but not at a multiple of 60 Hz, so you can digitally remove any 60Hz noise or it's harmonics.

note 1: If you want to measure the shadow by looking at it: you need to point your photodiode at a diffuse reflector like a white sheet of paper. In this case the job is a bit more difficult; the total light on the detector from a large diffuse surface will be roughly three to ten times lower. Each square millimeter's contribution is small, but they add up again as you integrate over the surface. If you need this worked out mathematically, leave a note.

note 2: If you want to do this from space, looking down at the shadow on the Earth, you'd need to use a small telescope and point it at a small patch on the Earth to look for the small drop. This would be much more difficult because any drift in FOV across the surface would produce plenty of noise as brighter or darker areas passed through the FOV.

note 3: You can find the shadow path using this ISS Transit calculator

below: Full sized image below is from here. Python was used to estimate maximum possible projected size of the ISS by counting orange pixels and using 30cm/pixel, as estimated from the American Football field width of 300 feet = 300 pixels. 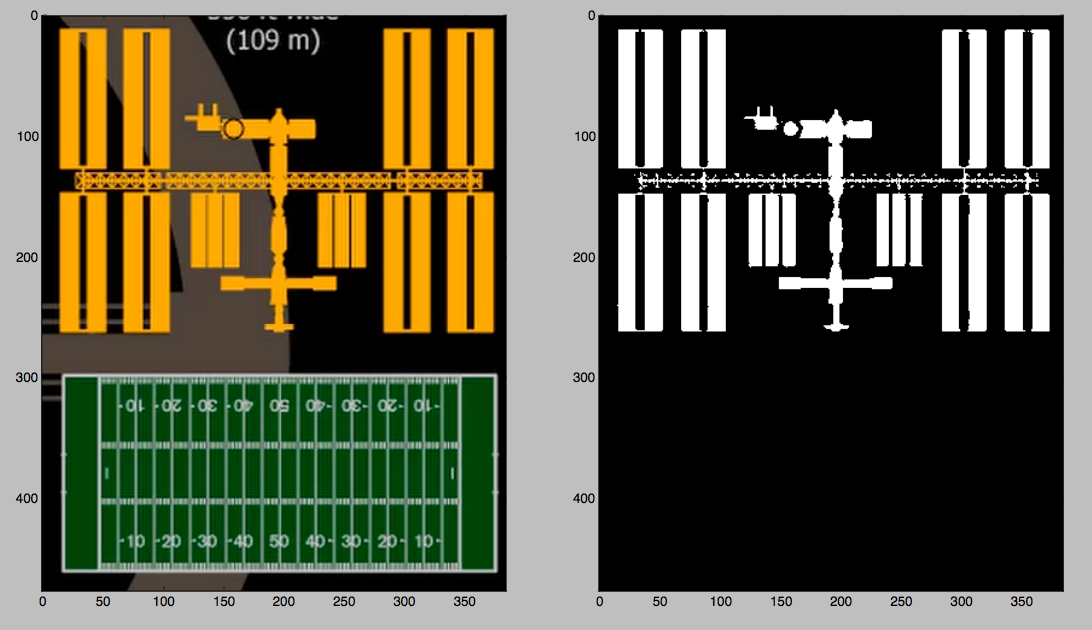 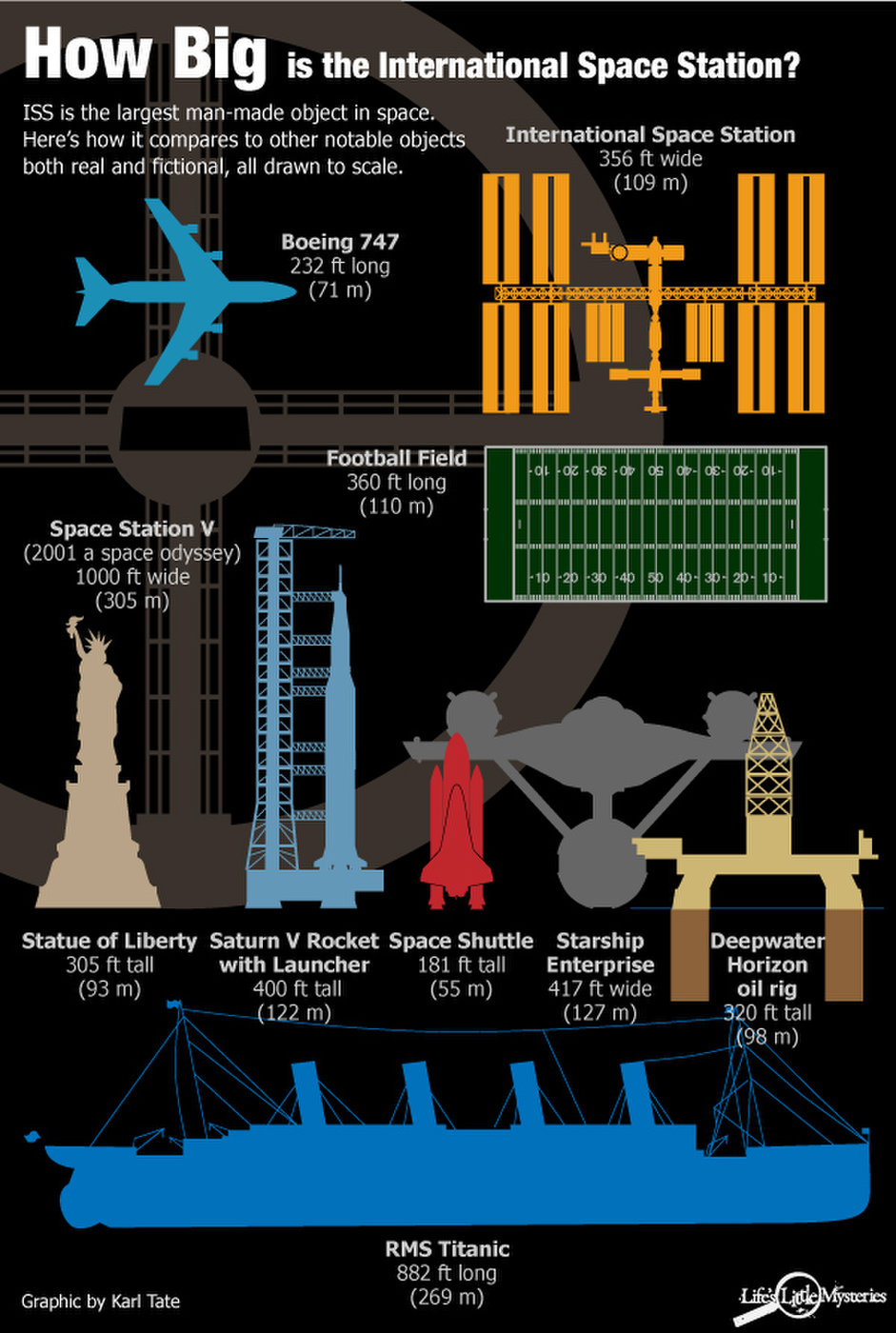 In terms of detecting the shadow there are a few lengthy answers to, essentially, the same question in reddit.

The most concise answer being that the ISS is too small to cast a shadow on the surface of the earth. The earth being in fact in the antumbra of the ISS.

On the other hand, we have means of knowing actively where the ISS is. So what would be the point?

Fig. 8 in Irradiance Variability Quantiﬁcation and Small-Scale Averaging in Space and Time: A Short Review shows variations many orders of magnitude larger on a 1 minute time scale, averaged from 1 second measurements. Those who collected and published that data set chose an interval as short as 1 second presumably because there still was variation worth recording that often.

Hunting for exoplanets from terrestrial telescopes by measuring tiny variations in a star's radiance due to an exoplanet's transits can overcome this by repeated measurements averaging away the atmospheric noise, and by knowing that the transits must be periodic. But that's different from measuring a single event. Even knowing exactly when the event will happen, you'd have to be really lucky to have an air column with sufficiently few disturbances.

Not the answer you're looking for? Browse other questions tagged iss sensors or ask your own question.

9
Could we possibly see the shadow offset from Parker Solar probe on Earth?

6
What is the cost of taking something down from the ISS?
18
Does the ISS have zenith-facing windows?
12
Which of the outer planets could you see with the naked eye if you were in close proximity?
4
What does the ISS look like by night?
8
What is considered the 'map scale' that ISS astronauts view the Earth?
10
How does the ISS Transit Finder website get the position of the ISS so accurately?
3
Nadir sensor for a spacecraft attempting to land
7
On the ISS what is that frame with a criss-cross of rubber bands?