Mechanical computing hardware for a future Venusian rover? How does it work?

I don't know why Gizmodo says NASA's Latest Venus Probe Concept Looks Like a Tim Burton Creation, because it looks far more like a Theo Jansen creation! Compare videos below as well.

I can understand looking into wind to power strictly mechanical instead of electromechanical locomotion, but I don't see how meaningful computing could be done mechanically. Roughly, what kind of mechanical computing hardware is being considered for a future Venusian rover? Is it like 1 FLOP and 1 kilobit, or something small and dense or even MEMS-like?

I'm interested because the 10,000 year satellite could really benefit from non-electronic computers to survive in space that long! 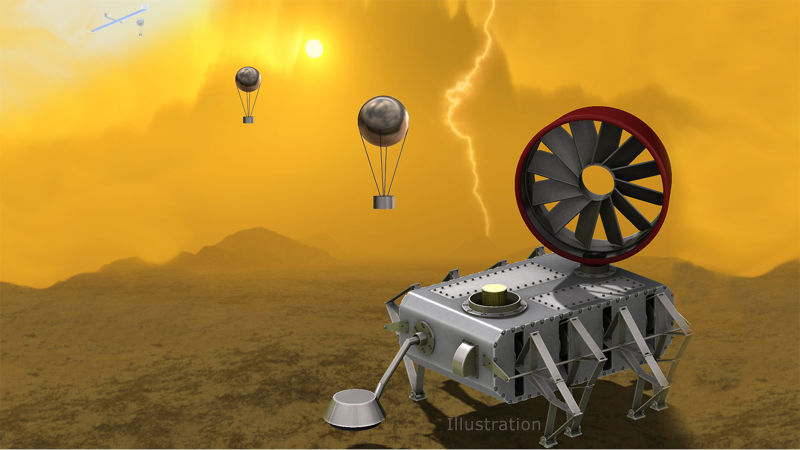 Don't underestimate what you can do with mechanical components. In the 1840s, Charles Babbage worked on a programmable general-purpose computer (the Analytical Engine). Sadly, it was never completed, although the idea is sound. An earlier design of his, the Difference Engine (which was not Turing-complete), was built in the 1990s.

That said, the AREE study hasn't advanced to the point of designing hardware. From page 19, the study summarizes the possible solutions (mechanical, pneumatics/fluidics, vacuum tubes and other electronics), then shows some possible implementations for elements like power storage, and navigation using a method for obstacle avoidance that does not need computation.

While Phase 1 demonstrated feasibility, a number of areas remain that require further refinement and demonstration to establish concept credibility. Continued work on a Venus rover concept that does not require yet to be developed technologies with unknown costs and timescales significantly changes the conversation with regards to Venus missions and achievable science.

This isn't a computer as the term is usually understood today, and it certainly isn't using morse code.

What the system is actually doing is taking the output of an instrument, probably a low voltage electrical signal, amplifying it to something mechanically usable, and converting it into rotation of the four disks on top of the rover (with 4 positions each, it's the equivalent of an 8 bit signal).

The value shown on those disks can be seen from an orbiter or high altitude baloon that can use conventional computers for all the more complex tasks.

Physically, the 'computer' part would be a bunch of gears that move the disks.

As shown in the previous answers, you can calculate a surprising with such systems, but due to weight concerns the complexity would probably be kept to a minimum - for example using relative positioning of the disks rather than resetting to an absolute value because the orbiter can easily subtract the previous value with no weight penalty.

Also don't forget that we don't have to do everything digitally. Analog computers were common until fading out in the 60's and 70's, but can be useful in some areas.

Not the answer you're looking for? Browse other questions tagged venus temperature high-pressure-environment or ask your own question.