What responsibilities does the Hurricane Harvey OPS team have, and what challenges?

Here is a tweet from NASA flight director Royce Renfrew's personal twitter account. I believe at least some of the Hurricane Harvey OPS team is on-site at Johnson Space Center but the work might be distributed. What kind of tasks and challenges does the Hurricane Harvey OPS team have? What's been going on there during the hurricane and its aftermath? 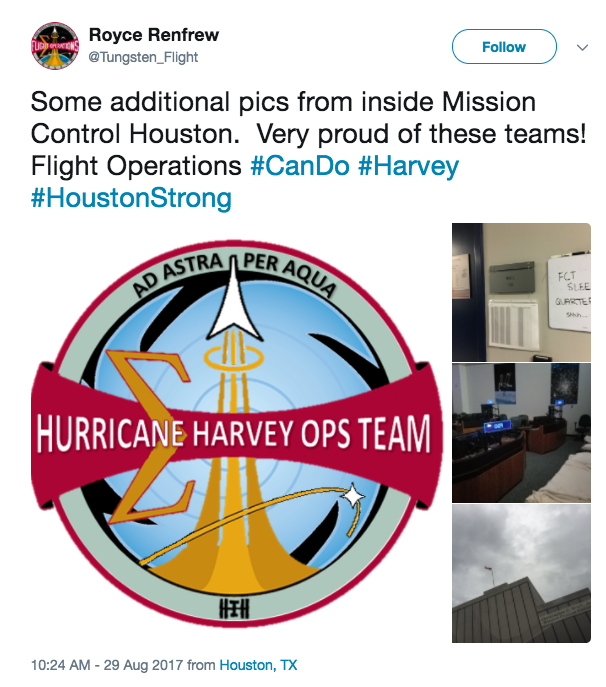 The 'Hurricane Harvey ops team' is a subset of the flight operations team. They've kept working in the Mission Control Center while all other personnel has been sent home.

Challenge: being cooped up in the office for several days with a hurricane going on outside, possible utility interruptions due to storm damage.

Despite the crisis unfolding flooding outside, ISS flight directors and more than 100 other “essential” personnel have ridden out the storm inside JSC’s iconic Mission Control Center to maintain watch over the ISS.

Another flight director described the scene as surreal, with off-duty teams sleeping in a backup flight control room. Pictures showed cots lined up in front of a Flight Dynamics Officer’s console.

Thanks in part to the team’s sacrifice, Harvey has caused no disruption to space station operations.

In one precautionary measure, downlinks of science research video has been rerouted to NASA’s Marshall Space Flight Center in Huntsville, Alabama, which can serve as a backup Mission Control Center in an emergency.

(this was part of my initial answer, leaving it here because it's interesting)

For hurricanes etc., NASA assigns a rideout team to various locations. The rideout team watches the site for damage, tries to mitigate it and decides when it's safe for other personnel to enter the base.

Here's a story about how NASA handled hurricane Matthew at Cape Canaveral in 2016.

Members of a 139-member “rideout” team will be stationed at various facilities across the space center to monitor critical systems “and report any significant events” to emergency operations personnel in the Complex 39 Launch Control Center where space shuttle launchings were once managed.

“After the hurricane has passed, and winds have dropped below 50 knots, areas around KSC will be assessed and the damage assessment and recovery team will report for duty,” Diller said.

Not the answer you're looking for? Browse other questions tagged nasa weather or ask your own question.

7
What does the ISS Mission control center do?

10
Does NASA have any documented procedures in the event of discovery of extraterrestrial life?
5
How good does the weather have to be for a rocket launch?
7
What role does the NASA deputy administrator play?
7
Why does Jupiter have the colors it does?
8
What are the known historic global and regional dust storms on Mars?
0
Does NASA have an Army and Air Force Exchange Service?
0
What is/was the IMP team? (related to Mars Pathfinder)
8
What impact does the Dec 2018 partial shutdown of the US Federal Government have on current space missions?
17
Does the Voyager team use a wrapper (Fortran(77?) to Python) to transmit current commands?