How do we make a round-trip journey to Mars?

I've been to Kennedy Space Center in Florida, where I saw the huge Saturn V rocket... 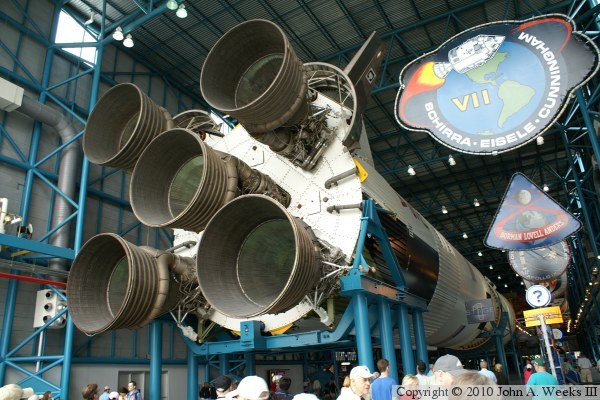 This was used to get to people to the moon. It had a Lunar Module to propel itself on and off the moon's surface once the rest of the rocket had been ejected and dropped to Earth.

So as far as the moon goes, the Saturn V was an ideal machine because the Moon has a relatively small acceleration due to gravity on its surface. $g = 1.624 m/s^2$, so the Lunar Module doesn't have to be too big or powerful.

But how can NASA apply the same technology to getting people to Mars? Not only is Mars a lot farther, needing more fuel, and an even bigger rocket, but Mars also a higher acceleration due to gravity amounting to $g = 3.741 m/s^2$. This would not only need a huge rocket, but also a pretty big (and I dare say unfeasible) Martian Module. So, even if we could make the journey to Mars, how would we get back to Earth?

If the US Government ever gets back in gear, you can read NASA's Design Reference Architecture 5.0 (DRA 5) for human missions to Mars. (I have a copy, but I don't see a way to upload it here.) Here is a summary.

The basic idea is to use several Saturn V's or equivalent, and put up pieces of the mission. Some parts are assembled in Earth orbit, some meet up on the surface of Mars or in Mars orbit. The document shows variations that require seven to twelve Ares V launch vehicles, where each Ares V is about equal to 1.5 Saturn V's. In the chemical propulsion variant, about 2/3 of the launches are rocket stages with propellant.

As for how to make getting back appear somewhat feasible, a few tricks are applied. First, Mars orbit rendezvous is used, just as we used Lunar orbit rendezvous for Apollo. Then the humans only need a rocket on Mars big enough to get them into Mars orbit, and a capsule that they only need to survive in for hours or days. Their return vehicle in orbit around Mars, with the propellant to leave Mars and the supplies to survive the trip, didn't have to land, vastly reducing the mass required. Second, the rocket on Mars is mostly fueled there using carbon and oxygen extracted from the CO2 atmosphere. (They bring hydrogen to make methane with.) Third, the orbiting return vehicle got into orbit around Mars by using aerocapture, replacing a lot of propellant with an aeroshell, saving some mass.

Though I would ask: why do we need to provide a way to get back? The ability to get back is something like 2/3 of the mission cost. It would be far cheaper to send them on a one-way trip, and follow that with much smaller and inexpensive resupply missions to keep them alive and productive indefinitely. There would be no shortage of highly-qualified volunteers.

Instead of NASA approach, which without a change in funding isn't going to happen within any foreseeable perspective, let me look at the SpaceX approach.

Let me describe the missions in a similar way as one goes with Kerbal Space Program, starting from the end and adding more stages, more boosters, heavier rockets as one gets towards the launch.

Every time you reach next point multiply the mass so far, including fuel so far, by delta-V needed and you're getting the scale, size and mass of the next (actually previous) stage. As you can see this grows into the enormous Saturn V with a tiny capsule in the end. Nothing reused. All the fuel including last return burn carried and propelled all the way. Lots and lots of fully disposable stages.

Now let's try the same for BFR mission to Mars and back.

And that's it. One Mars landing means about 9 BFRs, each of which is about the size of Saturn V, and likely costs similarly. The difference being that everything either is recovered, or remains at the destination as permanent infrastructure for further reuse. After building these 9 BFRs, if nothing crashes, you can send as many missions to Mars as you like and they will cost about 18 tanks of methane and oxygen worth each, in exhaustible resources. Meanwhile, all that's left from Apollo is some museum pieces and you're not going to reuse them.

8
What precision is needed for aerocapture?

11
What are the synergies between human landing on the Moon and on Mars?
6
Could Orion be used for human exploration of Phobos and Deimos?
6
Fuel needed for rocket lift-off as a function of the altitude
7
Terraform via moving Ceres To Mars orbit, using ion drive
4
Do Curiosity's reported measurements of Mars' surface gravity (~3.717 m/s^2) include centrifugal effects?
2
What kind of rocket design would be used for Lunar/Mars E2E travel when colonized?
14
Would a sufficiently deep cavern on Mars provide habitable temperature and atmospheric pressure? Was Dick Tracy wrong?