Why are these astronauts green?

The Space.com article Space Station Crew Returns to Earth Tonight: Watch It Live leads with a photo of three astronauts on the ISS that are backlit with bright green light, which can also be seen spilling out onto the walls in various patterns.

Neither the article nor the photo caption (shown below) mention it or explain the origin or purpose of this bright green lighting, but there must be some reason for it. Is this explained elsewhere?

below: "NASA astronaut Peggy Whitson, Russian cosmonaut Fyodor Yurchikhin and NASA astronaut Jack Fischer float through the Harmony module of the International Space Station. All three will return to Earth on Sept. 2, 2017." Credit: NASA, from Space.com. 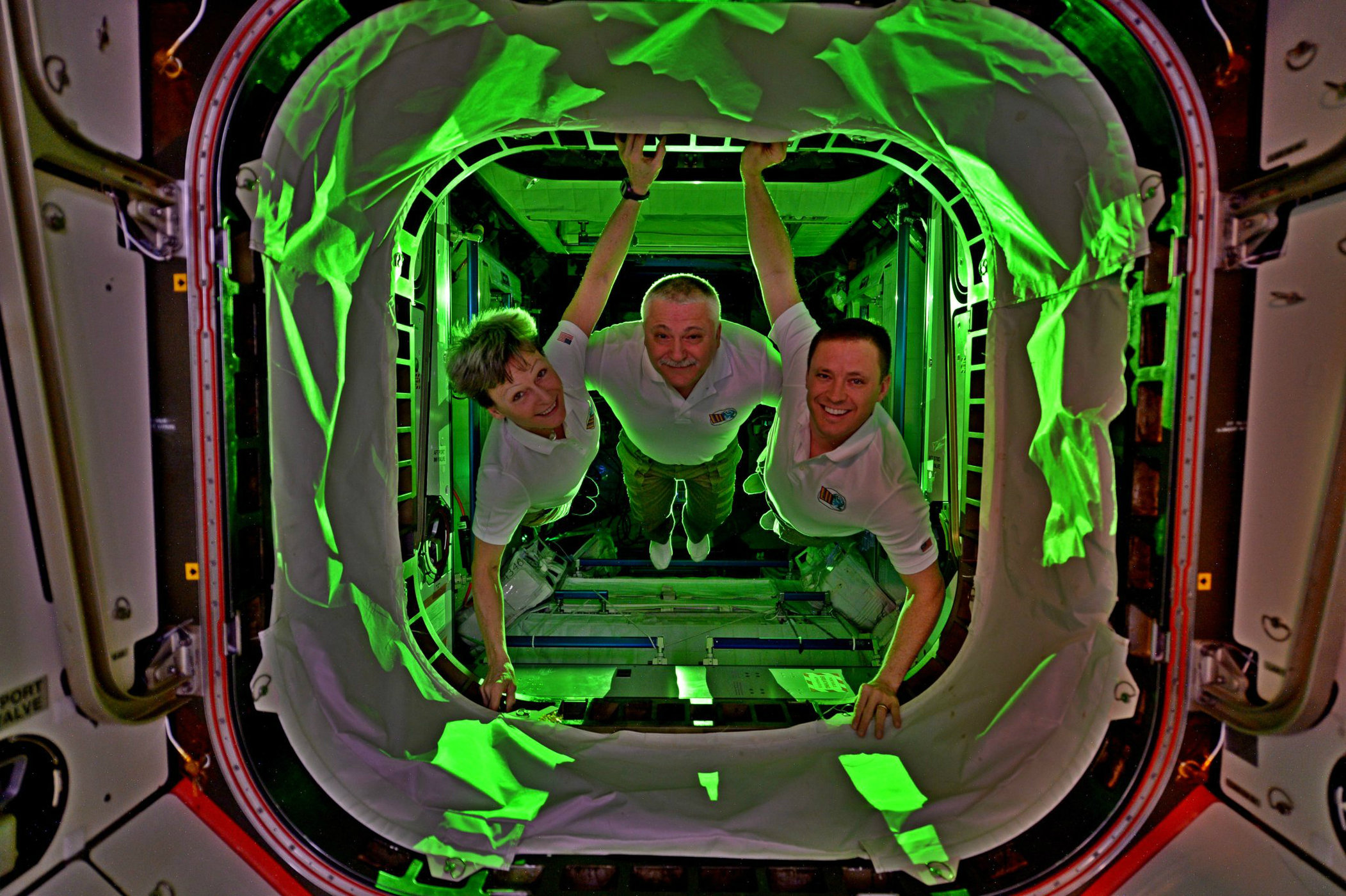 New Solid State Lighting Modules being installed on the ISS have the ability to be set to millions of different colors.

The crew probably enjoys playing around with the settings. 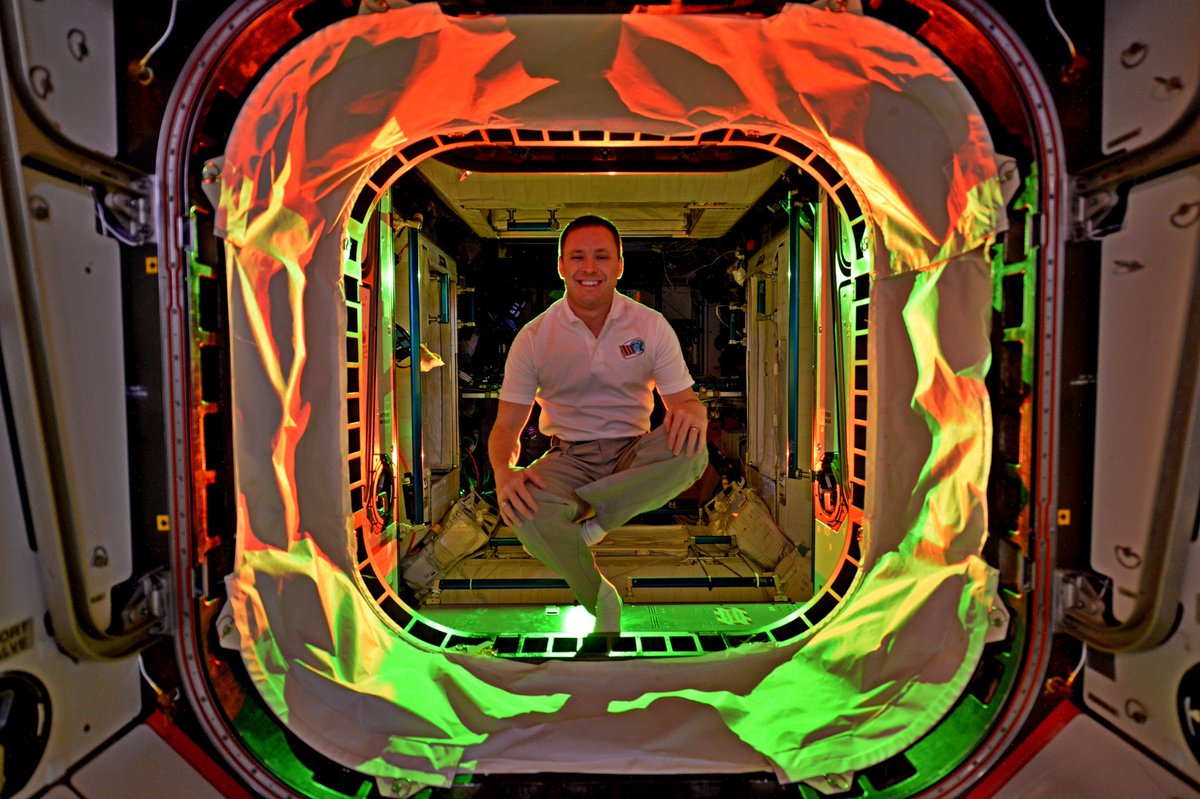 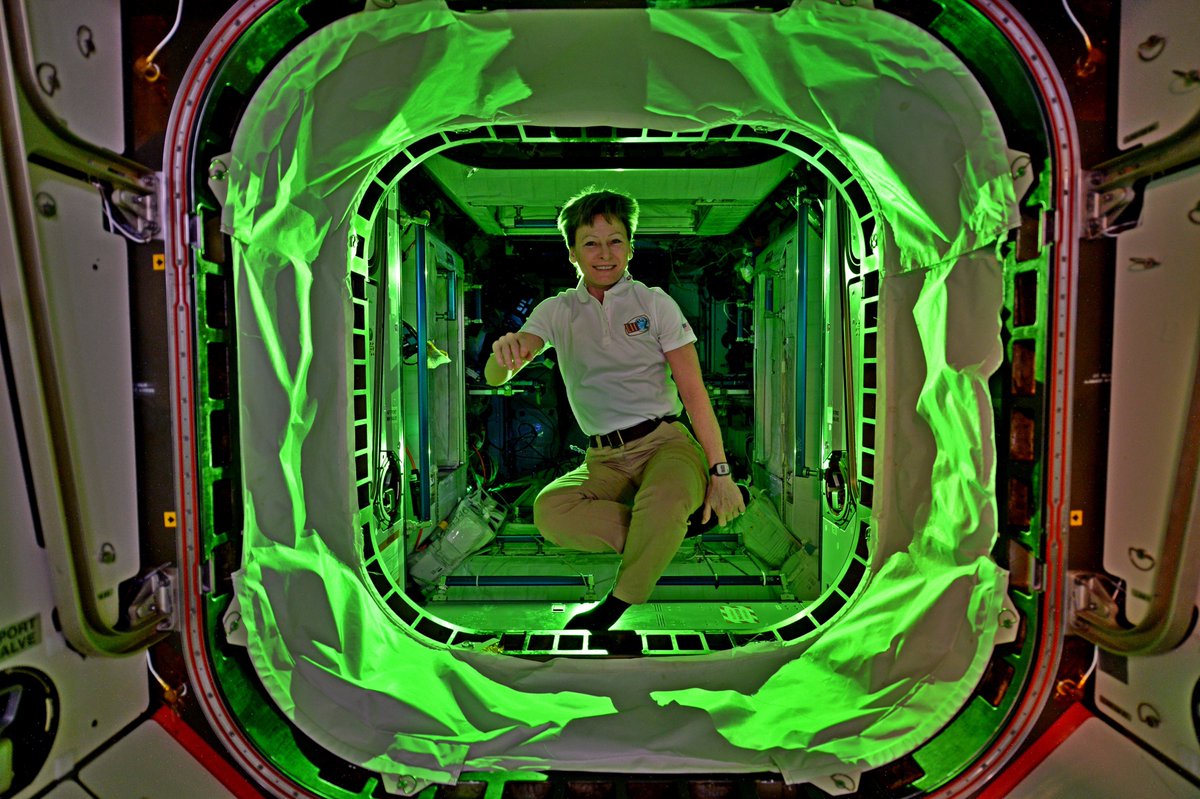 I'm thinking it is not to do with the LED lighting system at all, but rather the crew having fun.

There is a single hard light behind the subjects in all of the related photos i have seen.

The photos are harshly processed in order to bring out the colors more.

The most numerous brand of camera on the station is the Nikon DSLR (IIRC chosen for its radiation protection which was rated better than Canons at the time of selection).

Particular models have a remote commander built in.

Particular strobe units have a remote commander built in.

In both cases these can fire other separate strobes remotely.

In most cases the strobes came with a pack of colored gels with which to make, sometimes fancy, effects.

I know other brands can do this but Nikon had it built in to their system for a while which certainly made it more accessible than if using others, especially at the time that these would have gone up to the station.

For reference, the SSLA LED system is fixed to 3 variations of white light only.

The SSLM does not have any obvious ability to change its colors.

The LED system is fixed in place, sitting in place of where the GLA used to be, and that means it is not likely to be a bright floating source behind the subjects in these photos.

Of course the crew could have brought up their own photographic equipment and accessories to use.

Late addition: I found a reference to the pictures by Jack: 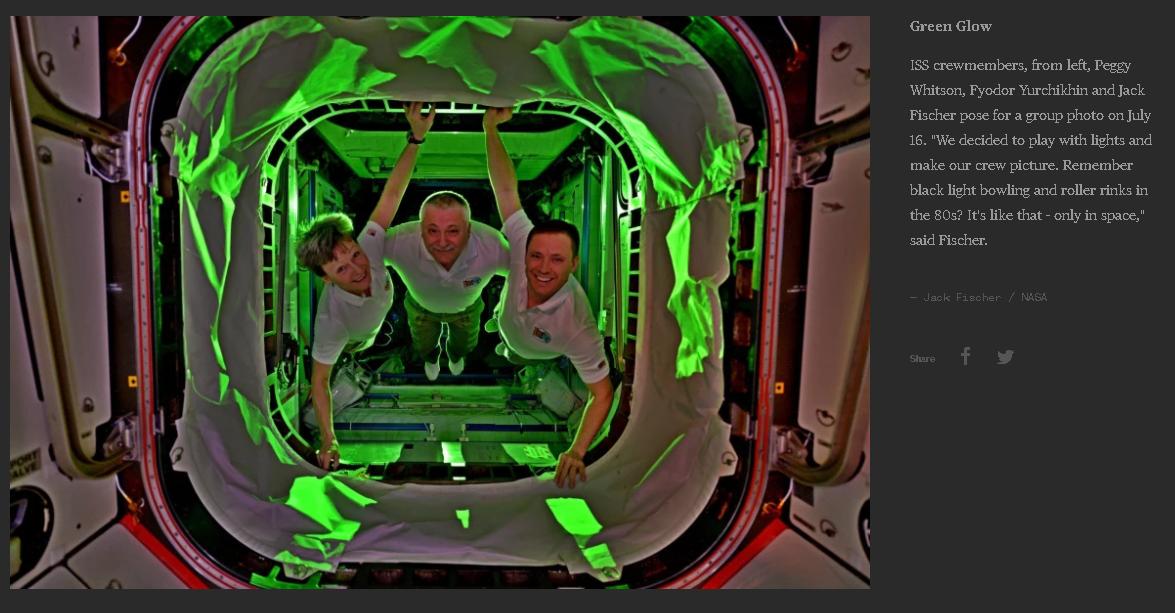 But no technical explanations though. (They actually just quoted his tweet) 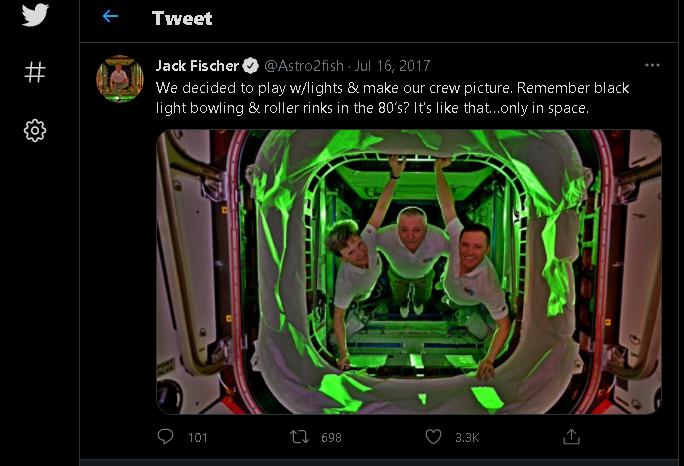 I've tried to find other photos where they use the strobes creatively in the ISS but there does not seem to be many.

Commander Alan Poindexter however did manage at least a creative group shot back in 2010 on STS-131.

He unfortunately passed away two years later, but not before writing a really great article about being taught to use the camera equipment on their mission and the results. 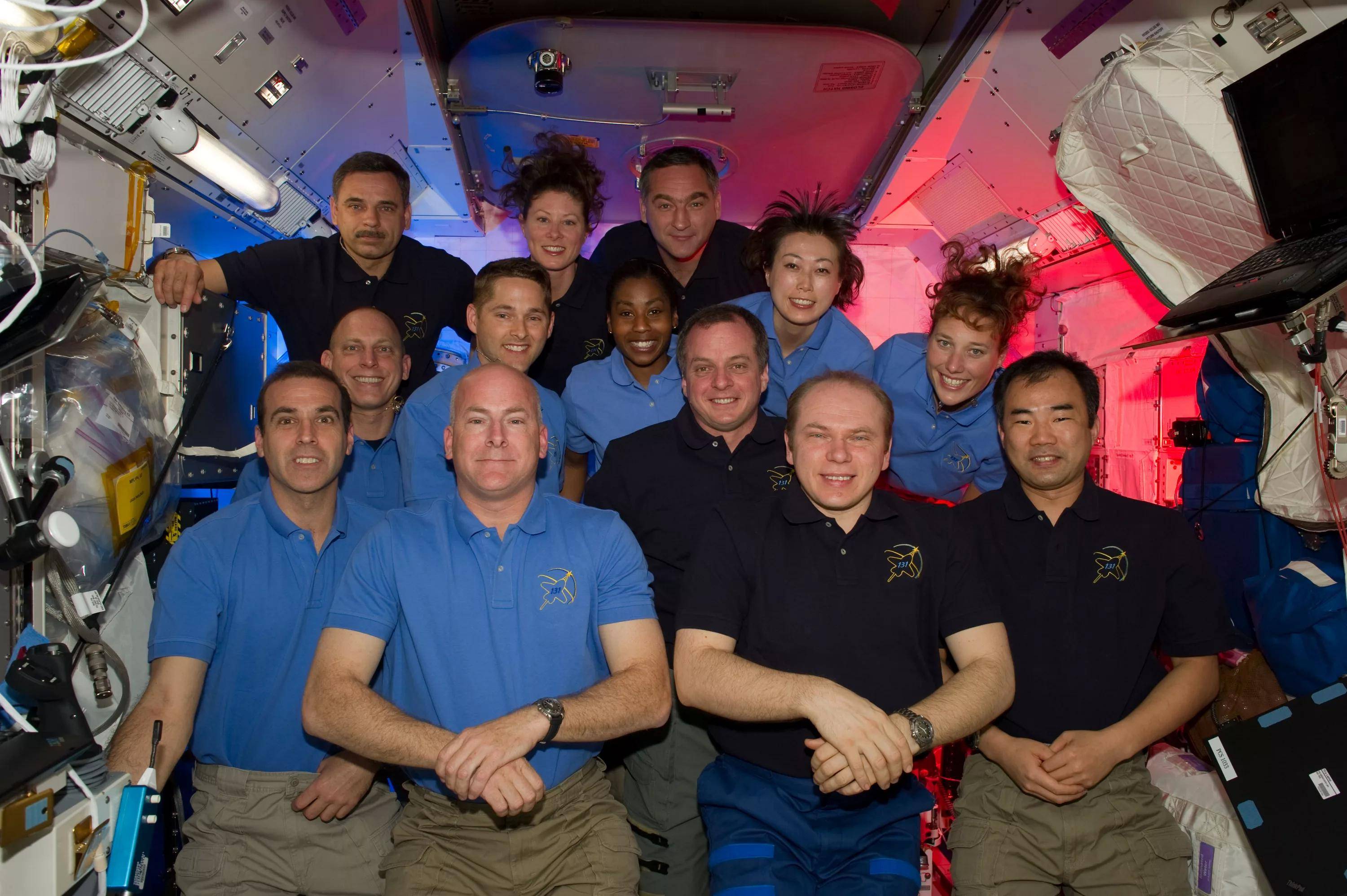 Here he has a photo where he used 4 SB800 strobes, 2 with gels used behind the group and 1 serving as key and another as commander to all the slaves. 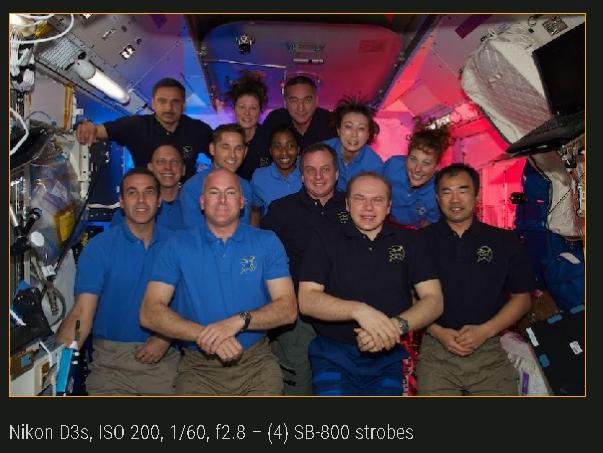 Compared to 2018, it looks like the GLA's have not been updated (Kibo GLA's had a high failure rate when first installed).

Also note the placement of the lighting fixtures - this helps orient the crew to where the ceiling is - its where the lights are, and where they are not is the floor. 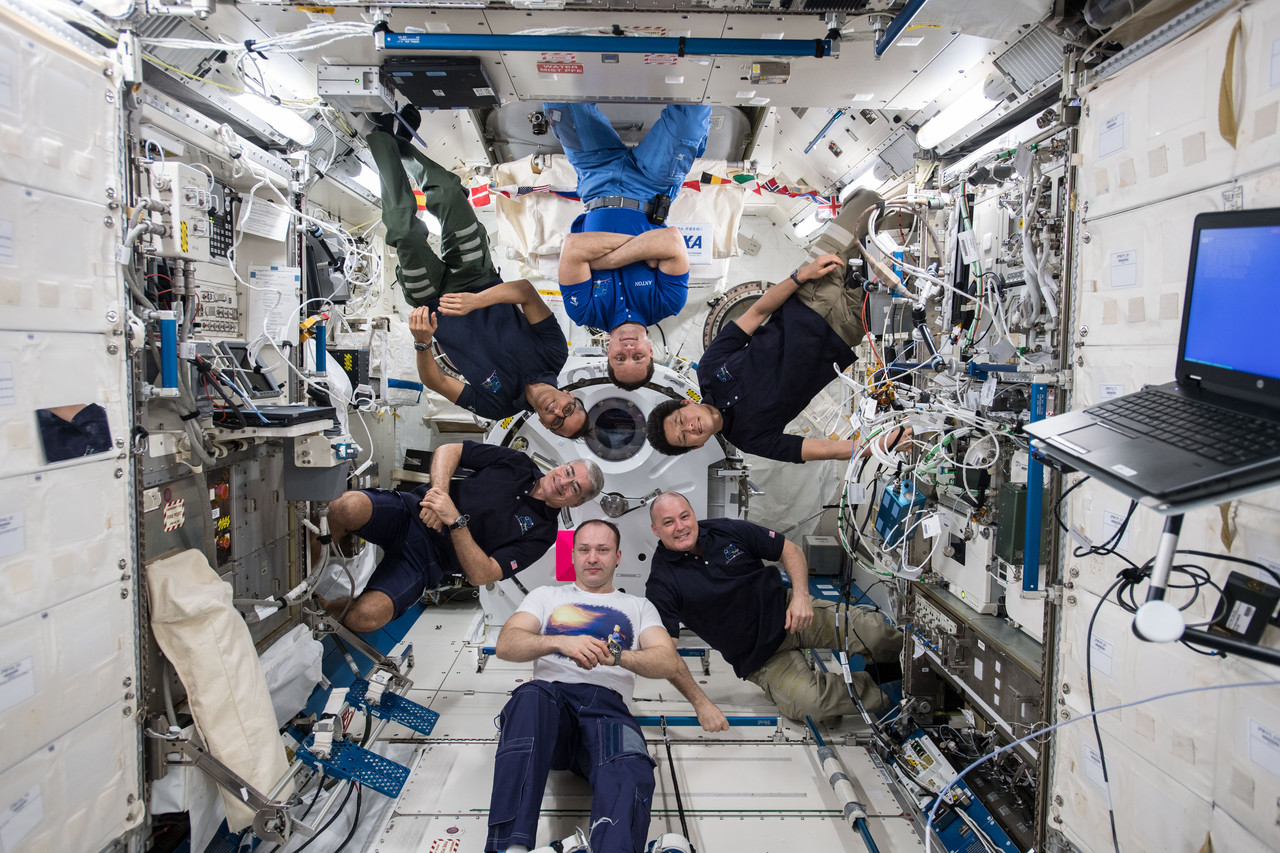 12
Were any toxic metals used in the International Space Station?
7
Concepts for interior color of interplanetary crewed spacecraft
5
Is the new RGB solid state LED lighting on the ISS ever used to produce colors other than white?
0
What kind of lighting does the ISS use?
4
Exterior "running lights" on ISS?
0
How does the ISS crew adjust the color of the new LED cabin lighting? Is there a knob somewhere? Can it be programmed to change by itself?

2
Why did these cosmonauts retire early in their careers?
16
Do ISS astronauts notice, or experience symptoms of elevated CO2 levels? Do they wear monitors regularly?
4
Origin and history of the traditional tree planting ceremony at the Cosmonaut Hotel?
1
Were there special circumstances leading to these astronauts' spacewalking 5 days after arrival at the ISS?
5
How fast do they spin astronauts these days? Maximum routine g-training for astronauts in the 21st century?
21
What are these green text/line displays shown during the livestream of Crew Dragon's approach to dock with the ISS?
6
Identify these astronauts
6
Are Jeff Bezos and Richard Branson astronauts?
1
Why is the selection process for astronauts so rigorous?