Why does the Falcon 9 FT have a higher payload capacity to GTO than a Zenit-3SL?

The Zenit-3SL has a slightly higher thrust for both 1st and 2nd stage and is launched from the Equator. However, the Falcon FT(expendable) has a higher payload to GTO and its diameter is 3.7m compared to the Zenit's 3.9m. You can also explain why the LEO capacity for Falcon 9 FT is higher than for Zenit-2SLB.

The most recent iteration of the Falcon 9 FT has slightly more thrust than Zenit on both the first and second stages (according to current Spaceflight101 figures), but thrust is actually a relatively small factor in the performance of an orbital launcher (beyond the minimum required to get off the launch pad, of course).

Zenit has a much better engine specific impulse on the first stage due to the RD-171's staged-combustion engine cycle, but that's about the only place where it outdoes the Falcon 9.

The dominant difference between the two launchers is the ratio of fuel mass to dry mass, particularly on the second stage. Falcon just carries less stage mass to orbit. Here's a breakdown of the important performance specs: 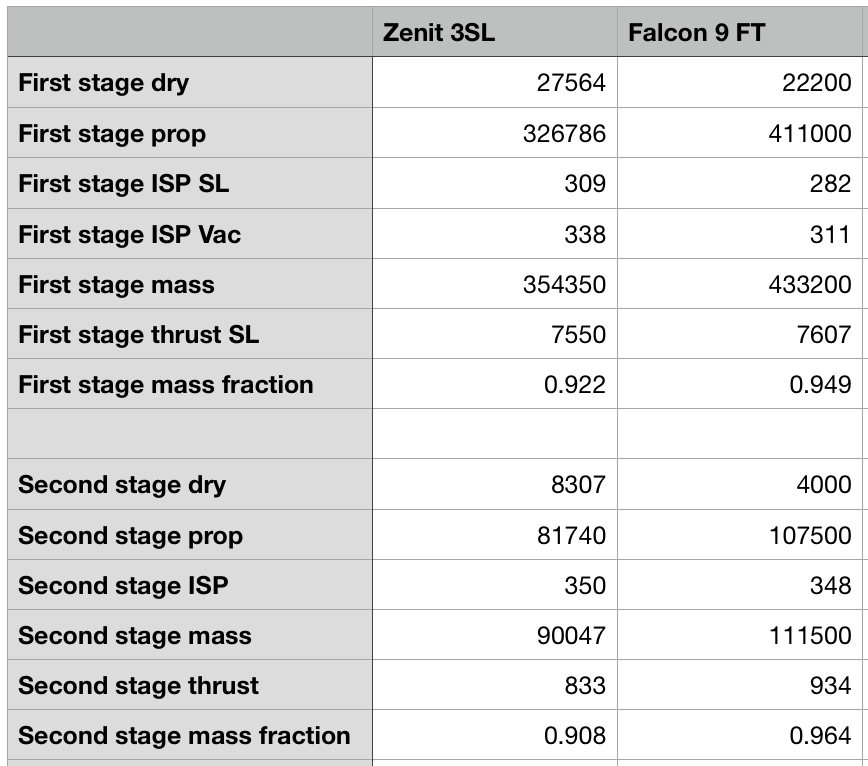 The dry first stage of the Zenit masses almost 25% more than Falcon's despite carrying 20% less fuel. Zenit's second stage is carrying a 4-ton handicap relative to Falcon's, and that mass, flying all the way to second stage cutoff, comes directly off the payload capability.

Both rockets use a similar construction style, a thin aluminum skin with stiffeners welded in (Zenit's design was a major influence on Falcon 9). You would think that their mass ratios would be more similar. My guess is that improvements in structural-engineering modeling software in the 25 years between the development of the two rockets allowed SpaceX to shave a lot of weight while maintaining the necessary strength.

Not the answer you're looking for? Browse other questions tagged spacex rockets or ask your own question.

8
What tonnage can current heavy rockets land on the Moon?
2
Falcon Heavy first stage abilities
14
Why are rocket mass on the launch pad and payload mass to LEO not strongly correlated?
12
How many 1st stage boosters will SpaceX settle for, for its LEO/GTO fleet?
8
Why is the Dragon small compared with the Falcon 9 LEO payload
8
What difficulties will be faced modifying the Falcon 9 FT, so to have better and easier landings of the 1st stage from a GTO mission?
14
Why can Falcon Heavy bring 4.2 times as much mass to Mars than F9, but only 2.7 times as much to LEO?
9
How much payload can Falcon Heavy Reusable lift?
17
Why can't Falcon Heavy accelerate deep space payloads as fast as Atlas V and Delta Heavy?
5
1/st Stage slow down after MECO and separation for F9's