Following question about flight on other planets an answer contained a quote:

Jupiter: Flight on Jupiter is unrealistic. Jupiter's gravity is much too strong. The power required to maintain flight is about 3x that of Earth making flight there highly unrealistic.

Fighter jet planes use engines that are much more than 3x the power required for flight. Sure that's wasteful and expensive, but not nearly impossible.

Moreover, what is expensive in terms of energy, is rocket engine that contains its own fuel and oxidizer. On Earth we commonly use jet engines that use atmospheric oxygen for oxidizer, and own fuel.

Now, what if we reverse that? If the engine were to fly in hydrogen (or methane for that matter!) atmosphere, it would need its own oxidizer but it could burn the atmospheric gas for power... or am I missing something? Would an aerobot on Jupiter, Neptune or any of the planets with enough burnable material for an atmosphere, using own oxidizer to burn it for propulsion, be viable?

Sure. That would save a fair bit of weight, avoiding the tankage, insulation, and cooling systems to maintain liquid hydrogen, or alternatively, the mass of the pressure tank for gaseous hydrogen. You'd need to bring the oxygen. You actually don't save much weight due to the hydrogen itself, which is only $1\over 9$ of the total propellant mass.

You can also consider bringing flourine instead of oxygen to burn with the hydrogen. Nasty stuff though. 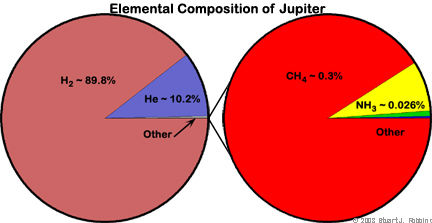 Since the gravity of of Jupiter is three time stronger than Earth so we need to create three time the lift that we create in earth to lift the craft. But hydrogen fueled aircraft are more powerful and we use then to attain hypersonic flight in Earth. The main problem with this is that materials at such high temperature would make the metals brittle. But creating lift in high Reynolds number flow is very hard and because lift coefficient is inversely proportionaly to Reynolds number.

One can save the amount of materials such as insulation, tank but that it will be compensated to some extent by the following

Lift = Cl*0.5*(density)*(velocity)^2*Area. There are three variables that can be optimized to achieve the proper lift to remain in flight in Jupiter; density, velocity, and wing area. Increasing wing area adds weight and makes the vehicle more difficult to launch from earth. Maintaining a high velocity will require higher thrust and would expend more oxidizer on board, and add more drag. Finally flying in a lower altitude with higher density of Hydrogen will add more drag on the vehicle but will save on power requirements for compression before combustion. There is no true answer except for the optimization of all parameters. There's also design constraints of nozzle area ratios and operating pressures. As you increase the back pressure on the nozzle (at lower altitudes), it's more difficult to achieve fully expanded flow, since shocks may develop at the nozzle exit (assuming C-D nozzle)

The game changer for a mission like this would be to fly in a specific cloud type with a naturally high composition of oxydizer and engineer a way to extract it on board. Or, find a different power source all together (solar, thermal, radiation).

Not the answer you're looking for? Browse other questions tagged aerobot or ask your own question.