I'm trying to understand the equations of motion for a rocket launched from earth, through the atmosphere, and into LEO. I found a set of ordinary differential equations which describe the motion of the rocket (see this reference, slide 3). Below is a diagram of which should help to describe the variables in the equation: 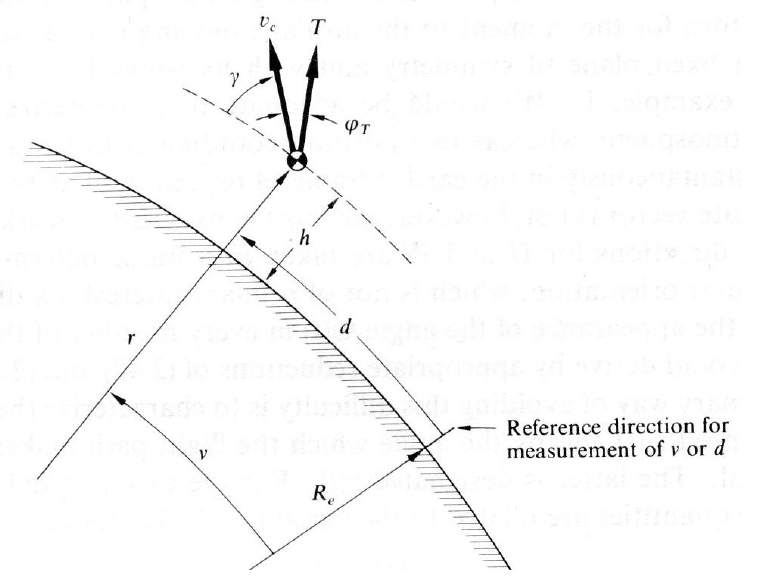 The differential equations are:

I recognize the first equation as the equation for linear acceleration, where I think $k=\mu=GM$ is the gravitational constant times the mass of earth (please correct me if I'm wrong). I don't know what the second equation represents or how it was obtained. Can anyone give me some insight into how this equation is derived? Is it the statement of the conservation of some forces? If so, what forces in particular?

I'm not even entirely sure that this is the proper form of the dynamic model for the rocket's trajectory. I tried cross-validating this model with other models to see if this is correct. In this process, I found an answer on another stack exchange question which almost describes the same equation, but with an additional $\frac{v}{r}$ term in the $\dot{\gamma}$ equation. If I were to add this term to the $\dot{\gamma}$ equation, what would it mean? What force does it describe?

Also, I'm having a little bit of trouble understanding the notation, since the variables are not explicitly defined anywhere in the document. I think the D and L represent drag and lift forces. If so, I'm not sure why lift forces are not included in the $\dot{v}$ equation or why they appear only in the $\dot{\gamma}$ equation. The term T seems to represent the thrust of the rocket, which acts at an angle $\phi_T$ from the normal direction to the surface of the (perfectly circular) earth. The angle $\gamma$ seems to be the angle from the velocity vector to the local horizon. Have I correctly summarized these variables?

Any help understanding this equation would be greatly appreciated.

Browse other questions tagged launch orbital-mechanics trajectory or ask your own question.

4
How are rockets gimballed to produce a gravity turn for the space shuttle?
3
What is the physics behind a rocket landing on a celestial body with an atmosphere?

10
Clohessy-Wiltshire/Hill's Equations - F=ma?
1
What formulas do I use to calculate the gravity and drag forces on an object ascending from Earth's surface?
11
Improvements to script for Finite Burn Trajectory Optimization with MATLAB
4
Clohessy - Wiltshire equations for use in Asteroid "chasing"
10
What are the practical uses of a state transition matrix?
2
What is the analytical closed-form solution of the two-body problem to verify its numerical integration results?
3
How should I understand these phrases in this paper on orbit transfers?
3
rocket trajectory simulation in inertial frame, with drag