Could there be liquid hydrogen oceans on the surfaces of worlds (including frozen gas giants) in the distant Kuiper belt or Oort cloud?

This is something I'm wondering for a science book I'm writing (not science fiction) where I cover the various forms of life that could exist especially in our solar system - such as life on Mars of course - but also the more exotic types - life in supercritical CO2 on Mars or even deep in the Earth oceans, life using sulfur on Io, life in the ethane / methane seas of Triton (able to live in a non polar liquid), life living in the sulfuric acid clouds of Venus. All of these are serious suggestions by astrobiologists.

The book is actually mainly focused on Planetary Protection - protection from Earth microbes - but this is about places in our solar system where there may be life that can't be adversely affected by Earth microbes. E.g. no way that Earth life could survive in a liquid neon or nitrogen or hydrogen ocean or most of these other places, unlike Mars where it could and could seriously interfere with scientific study of the planet.

Mike Brown arguing on the basis of the discovery of Sedna close to the sun thinks there may well be many Mercury, Mars and even Earth sized objects out there. See this video.

We haven't discovered any of these yet, but here for instance is a paper from 2017, by Kathryn Volk and Renu Malhotra, building on earlier work by Lykawka&Mukai in 2008, suggesting the possibility of a Mars sized object at a distance of 65–80 au to explain the “Curiously warped mean plane of the Kuiper belt”. That’s based on the observation that the Kuiper belt bodies are in a plane offset by about eight degrees from the “Invariable plane” of our planets. For non technical account of their research by the astrophysicist Brian Koberlein, see Goodbye Planet Nine, Hello Planet Ten

There's also the possibilty that "Planet 9" consists of not just one but several objects: Worlds Beyond Pluto --"There's Not Just Planet 9, But Several Planets Beyond" and then you also have the possibility that while searching for it, they turn up smaller objects as happened for Pluto with Percival Lowell and Clyde Tombaugh's search.

Anyway moving outwards in the solar system, I have got as far as life in liquid neon which is another hypothesis by an astrobiologist William Baine. But there may be many worlds that are too cold for liquid neoN.

The nearby objects could have liquid neon lakes or oceans (a very speculative hypothesis but possible) - but further out - it would be too cold even for liquid neon. But what about liquid hydrogen?

If we discover a distant Kuiper belt or even Oort cloud object the size of Mars or Earth - which we could easily do in the next decade or two, might find one any time indeed - could it have a liquid hydrogen ocean?

The idea is to use chemical reactions that are too fast for our temperatures. William Baine suggests silanols, a silicon version of alcohol. The silicon - hydrogen bond is destroyed within hours at mammalian temperatures in presence of water, not nearly as stable as the carbon - hydrogen bond, but it's just what you want at such low temperatures and in non polar solvents. He writes:

"As a barrier to using silicon for living systems, however, this is only a problem if we assume that strongly protonating solvents (water, ammonia, hydrogen sulfide, and sulfuric acid in a cosmological context) are the solvent base. Oceans of cold, non-protonating fluids, and specifically liquid nitrogen, would be more favorable for silicon life. In such environments, the inherently greater reactivity of silicon-based chemicals could be an advantage, enabling “living” processes to occur at greater than geological speeds at the relatively lower temperatures where such fluids are stable. Such fluids could also include liquid methane, ethane, neon, or argon."

So astrobiologist have looked at life in liquid neon and liquid nitrogen - maybe even life in the Triton geysers. He mentions liquid hydrogen as another possible non polar solvent but he doesn't take that any further. He rules out Helium as needing temperatures too cold for the planets he discusses (2000 km diameter or larger) but he doesn't rule out Hydrogen, just drops the topic as far as I can see. His paper is here.

Astrobiologists have also looked at the possibility of life in the liquid hydrogen layer inside a gas giant - but there it's based on supercriticality which makes it a solvent in a region above 12.8 atmospheres and 33.3 K

What I'm wondering about here though is, what about a non gas giant that has an ocean of liquid hydrogen - ON ITS SURFACE just like our oceans - and perhaps an atmosphere above that - maybe hydrogen again or perhaps helium -at very low temperatures where everything else except hydrogen and helium are solid.

If such was possible - well - it might even be the most common type of ocean in our galaxy, and indeed universe -given the size of the Oort cloud and the number of Mars or Earth sized objects that might be in it - not trillions - but dozens or hundreds seem not impossible. There could easily be more of them than there are in the inner solar system, and if you go down to the smaller Moon sized or smaller planets then there are many more of them already than in the inner solar system -and if so - then if that is repeated elsewhere they could be by far the most common type of planet in the galaxy (I'm using the geophysical definition of a planet here).

New Horizons found that Pluto was losing Nitrogen only at the Jeans' escape rate, not at the higher rates of thermohydrodynamic escape. If an Earth mass world had a hydrogen atmosphere and it only lost it at a similarly low escape rate - well it might easily retain a liquid hydrogen ocean - if such could form in the first place.

So - I've searched the scholarly literature and have not found any cites on this idea yet. Anyone know if it is possible? Anyone studied it?

I can imagine that the main problem might be, how does the hydrogen collect in the first place? Without the gravity of a gas giant? A Jupiter sized object seems the minimum size for a sub brown dwarf so it couldn't form just by a condensing gas cloud for smaller objects.

But you only need a small amount of hydrogen by percent in an entire Earth sized planet to lead to oceans or at least lakes.

Incidentally such a planet might be hard to spot if the ocean is smooth like a mirror and global, or nearly so, reflecting only a small amount of light back to Earth. Liquid hydrogen is transparent however, much more so than water - not sure what that does to its albedo for a deep ocean of liquid hydrogen.

This was a question for instance for Quaoar after it was discovered. " If Quaoar instead has a surface with a strong specular reflection, it could have a much smaller half-total light diameter and actually be larger. The true limb-darkening function of such an icy outer solar system body is unknown."

This is my section about life in liquid neon seas and lakes with cites. 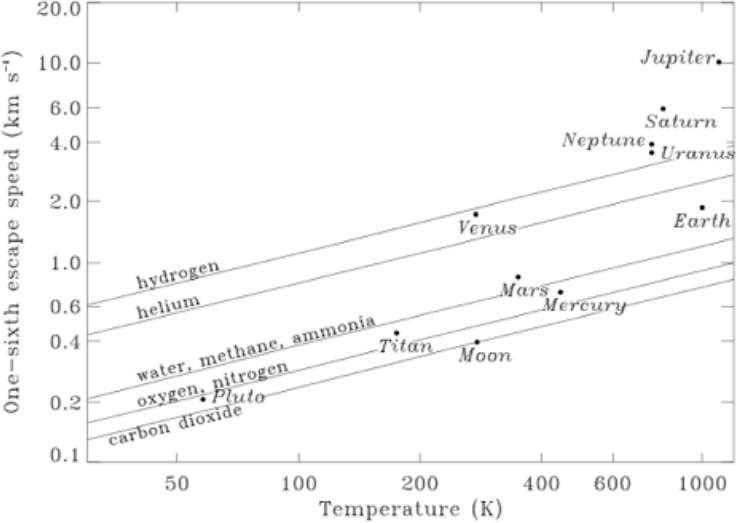 There if you draw a line up to the Hydrogen line through the Pluto dot and then across it passes through the Mars dot (note, this is from 2009, before the New Horizons results). Though the exobase could be warmer than the planet surface, still, it looks as if Mars sized objects or larger, further out than Pluto could hold onto a hydrogen atmosphere - if they can get one in the first place - at least, if they lose it only by Jeans' escape.

Gases can also escape via thermodynamic escape, a heating up of gas through absorption of UV from sunlight, leading to bulk flows of the gas into space starting from below the exobase, which makes it more complex. However Pluto is losing nitrogen at the Jeans' escape rate, not the thermodynamic escape rate, corresponding to a loss of about 6 cm of nitrogen ice over the age of the solar system. See the section on Escape towards the end of this paper.

I've found one mention of the idea so far, in a 1980 book "Life Beyond Earth" by Gerald Feinberg. I haven't read it yet but have ordered it.

I've found many more sources on this now, there are two main possibilities. Supercritical hydrogen, which has the advantage it can dissolve organics, in gas giant atmospheres it first becomes possible at above 12.8 atmospheres and 33.3 °K. I work out that alternatively for less massive bodies, hydrogen trapped below 147 meters of low density amorphous ice could be under enough pressure for supercriticality.

Or liquid hydrogen. If the gas is lost only at the Jeans escape rate not the thermodynamic escape rate (a heating up of gas through absorption of UV from sunlight, leading to bulk flows of the gas into space starting from below the exobase)

Pluto loses its atmosphere only at the Jeans escape rate, so it's not impossible. If so, then it could just about be possible for a Mars or Earth sized body in the distant Oort cloud to retain a liquid hydrogen ocean.

"The surface temperature of such cold worlds as predicted here is also most likely incorrect, as heating from cosmic rays and internal radioactivity will be a significant part of their heat budget. Thus the frequency calculations for liquid hydrogen or neon must be regarded as even more speculative than those for other liquids. The uncertainties in all aspects of this calculation as applied to hydrogen are too large to consider liquid hydrogen further in this paper."

So - it may be marginally possible.

Browse other questions tagged life astrobiology oort-cloud or ask your own question.

26
How to explore subsurface oceans (cheaply)?
4
Is Cassini equipped for detection of non-water-based exobiology?
11
Finding non-lit objects at light minute ranges
12
What existing life on Earth is best suited for the Martian environment?
4
Why do we search for extra-terrestrial water?
3
Could a terrestrial planet with a hydrogen atmosphere be habitable?
14
Why not bring life to Venus along with the next exploring mission?
2
Which are the reasons for wanting to have a colony in Mars first than in the Moon?
5
Life on Mars: How do we know it is not from Earth?
15
Why aren't there any robotic missions on Europa or Enceladus?