Have there been individual satellites that have been deployed and recovered more than twice?

Have there been individual satellites that have been deployed into Earth orbit (or beyond) and recovered safely back to Earth's surface more than twice?

Deployed means it's not a launch vehicle itself, and has no substantial propulsive capability beyond attitude control and minor adjustments.

Recovered also rules out anything that can re-enter the atmosphere by itself, so no space planes or shuttles.

Satellite means that it should pass the "Does it look like a satellite and quack like a satellite?" test. It has a battery and/or solar panels, at least a small computer, and can actively control its own attitude (ADCS), and does something useful.

There have been a few. One notable one was ASTRO-SPAS. This satellite was deployed from a space shuttle, flew independently making astronomical observations, and was retrieved on four separate missions.

For the other two missions the primary instrument was CRISTA (Cryogenic Infrared Spectrometers & Telescopes for the Atmosphere), on STS-66 and STS-85.

Here is a picture of the ASTRO-SPAS being deployed on STS-66.

Here it is flying free 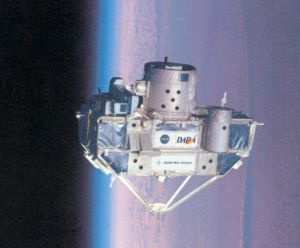 Link to a video of the SPAS being grappled on STS-85.

The ASTRO-SPAS is now displayed in the Deutsches Museum in Munich.

Other shuttle-deployed examples include the Wakeshield (two free flights, a third attempt remained grappled due to a failure)

and, as pointed out by uhoh, probably the all time champion, SPARTAN-201 with five free flights. 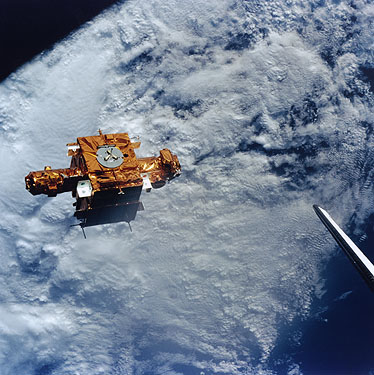 Because these satellites flew so often, they were used as generic payloads in the Space Shuttle Remote Manipulator (i.e. robot arm) simulator training flows. For the sake of nostalgia, here's a cheat sheet I made when I was learning to grapple free-flying SPASes and SPARTANs.

Not the answer you're looking for? Browse other questions tagged artificial-satellite payload-deployment recovery or ask your own question.

9
Commercial satellite retrieval - possible?
4
Have inflatable solar arrays ever been used in practice?

7
Have there ever been any Satellites that were hacked, is that a possibility?
18
Why do space agencies invest more in flyby probes rather than orbiting satellites?
12
Are cubesats deployed with fully discharged batteries? Even those on Sherpa?
1
Was Hagoromo's capture into lunar orbit ballistic capture or more propulsive?
28
What makes 21st century fairings so valuable that they'd potentially be recovered and re-used?
10
Has there been any satellites that used an 'upside-down' Molniya orbit?
12
Do any planets other than Earth have artificial satellites?
8
Have there been any probes launched that were actually clusters of probes?
5
Have weather satellites been sent to other planets?
4
Are there any related groups of satellites that are in a line of 6 or more in a row?