In this answer I read about the Inflatable Antenna Experiment that flew with STS-77. According to this article:

Packed into the Spartan, the IAE weighed only 132 pounds; on deployment (inflation), it would expand to an antenna 50-feet in diameter mounted on three 92-foot struts. The IAE was developed by L'Garde Inc., Tustin, California and Jet Propulsion Laboratory under NASA's In-Space Technology Experiment Program. (emphasis added)

The box at the focal point of the antenna is the satellite Spartan-201.

I am having difficulty figuring out what I'm even looking at in these images. How is the structure of this expanding? It seems to consist of three long struts and a circular ring. Is the whole thing one giant balloon? If so, what is it made of and how was it inflated? If not, then what is going on here? 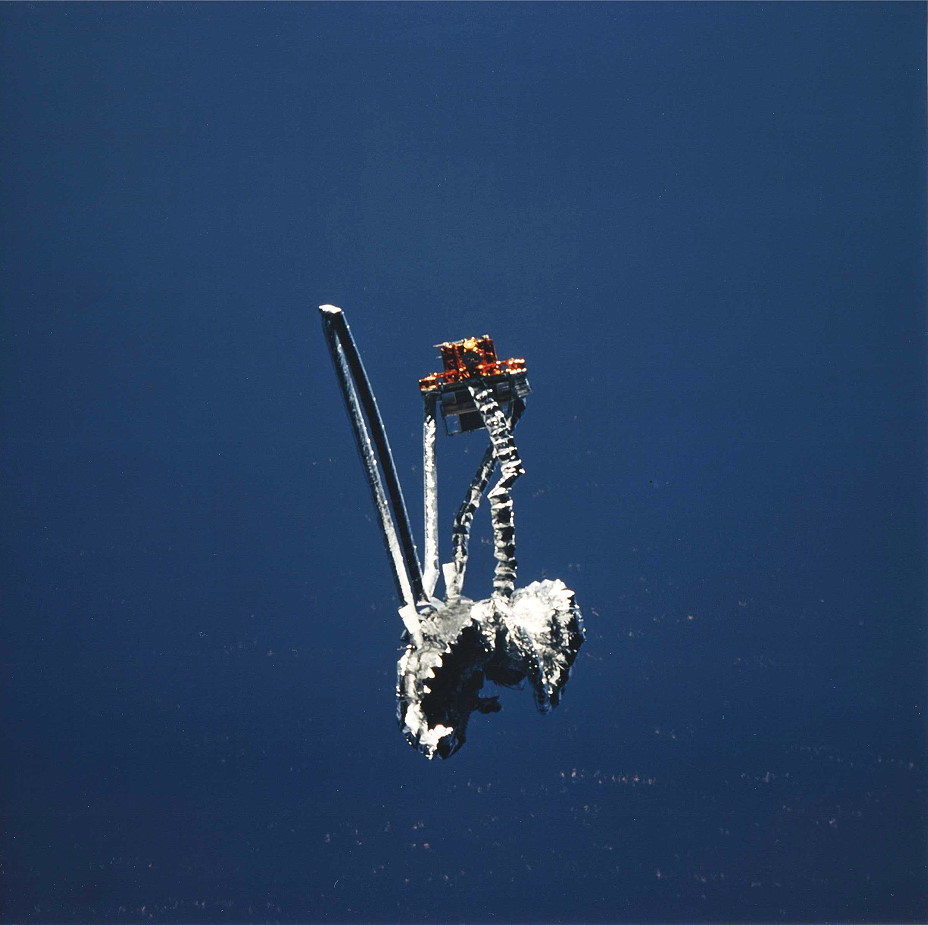 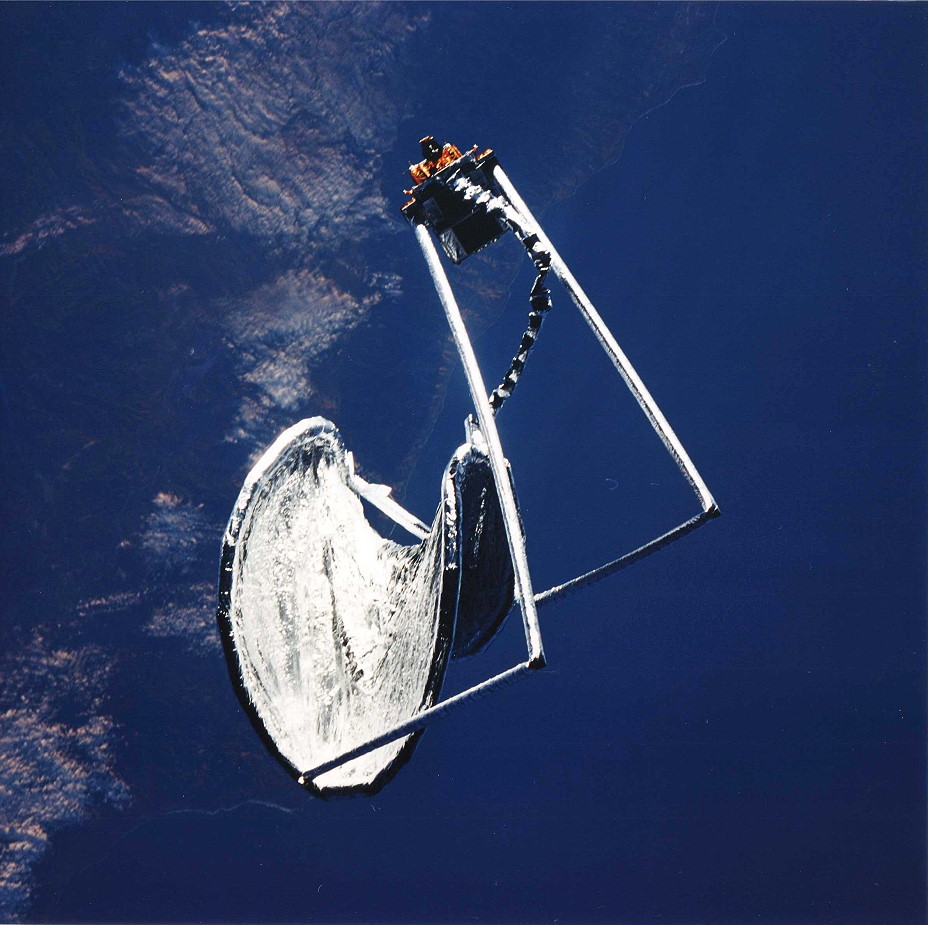 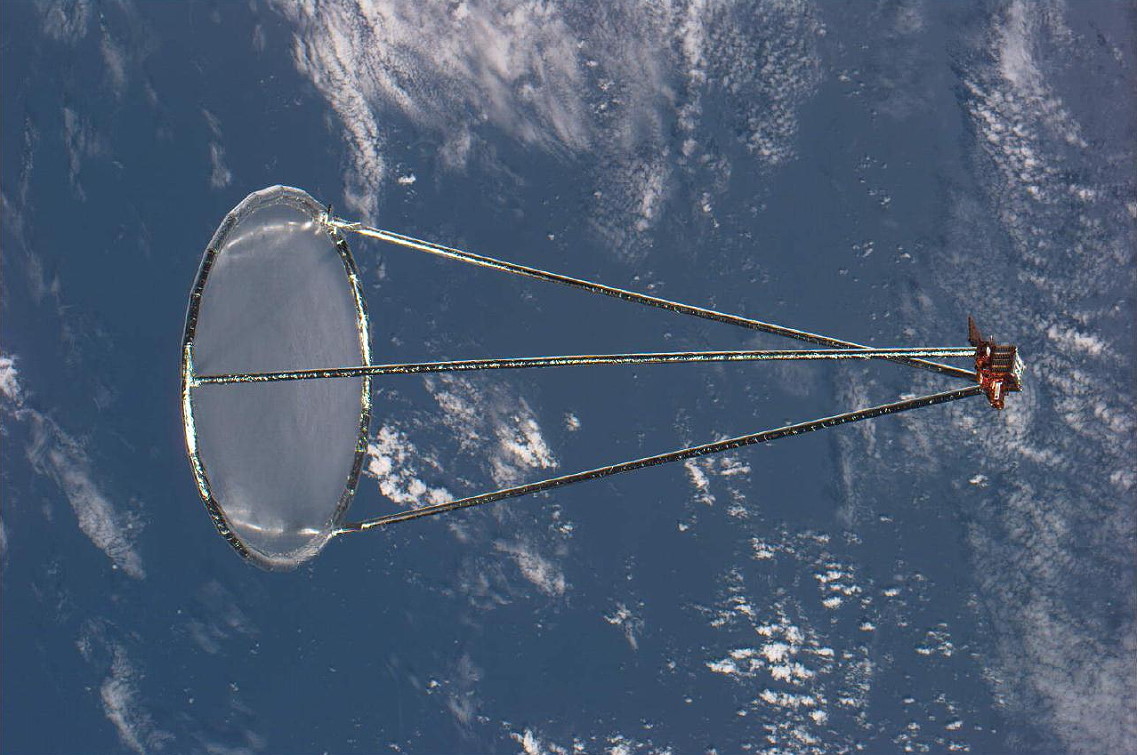 Yes, the whole strut-and-lens system was a giant balloon. There is good information in this paper. 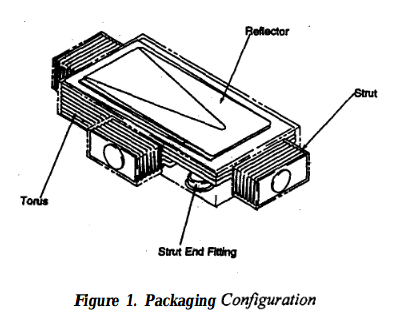 This fit into a box mounted on the side of the SPARTAN-201 carrier bus. The "balloon" was made of Mylar.

The basic deployment scheme for IAE was based on ejecting the stowed reflector structure, as a package, away from its launch container prior to initiation of its own deployment. This way the inertially-loaded reflector structure would essentially “pull” the struts out of their launch containers in a near uniform manner. When the struts were stretched to about 80% of their deployed length, a gas flow path would be developed and at that time inflation gas was to be introduced to all three struts at their intersection with the canister structure. While the struts were being pulled from their pods, a low rate of deployment of the lenticular structure would be initiated from the release of strain energy from the inflatable materials and a small amount of residual gas in both the torus and lenticular structure. The plan was that when the struts were nearly completely deployed, inflation gas would be introduced to the already partially deployed reflector structure in order to complete its deployment.

There were problems encountered:

On orbit the magnitude of residual gas and the strain energy in the stowed structure was significantly more than anticipated. As a consequence, the planned deployment sequence did not materialize. Instead, the reflector structure deployed prematurely so that its planned ejection away from the canister did not take place. By the time the struts migrated from their pods as a consequence of residual gas and material strain energy, the reflector structure was over half deployed. However, due to the robust nature of this type of space structure, the torus and two of the struts completed deployment at about the same time and complete deployment of the third strut followed within a minute or two.

All quotes and image are from the linked paper.

You're initial suspicions are correct. It is basically a big balloon. Here is why.

Although information is sparse, let's establish one thing: Spartan was just a carrier platform. It's sort of an interesting platform in that it has absolutely zero command and control. After release it executes its mission, is recovered, and the results are pulled off it after it is on the ground.

Spartan was just used to carry the inflatable antenna experiment. Antennas in space generally have an incentive to be physically large. Roughly speaking, a physically larger antenna will have higher gain. Gain is a phenomenon of antenna design. An ideal isotropic antenna radiates power equally in all directions. For a spacecraft communicating with Earth this is incredibly poor. Even a simple antenna design that radiates energy only in the 180 degrees toward the Earth would be twice as effective as an ideal antenna. You could use a poor antenna with a powerful transmitter, but this requires larger solar panels and a bigger battery. This increase the payload launch weight even more.

Real antennas with real gain have a huge number of variables to deal with. A television satellite antenna is often designed to radiate energy only towards the part of the Earth where viewers are expected to be. A deep space probe uses a high gain antenna, but just points at the Earth. The apparent size of Earth is extremely small, but by keeping pointed at Earth it can radiate more energy back towards Earth. This raises the Signal-to-Noise ratio. The Shannon-Hartley theorem establishes that a higher Signal to Noise ratio enables more information to be communicated in the same communications channel. It doesn't matter if you're 10 feet from the receiver or 10 light years away, this theorem holds true. 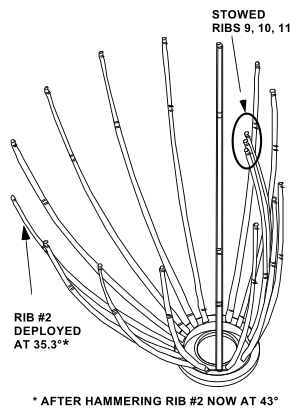 You can find some more information about this type of antenna on one manufacturer's website. Unfurlable Mesh Reflector Antennas is the term that Harris Corporation uses to refer to their product. There are many suppliers, I just have seen one of their antennas in person before.

An inflatable antenna could be much simpler! A small gas generator could slowly raise the pressure inside the antenna until the antenna assumes the desired shape. I am assuming this experiment used a gas generator, I don't actually know this. for This gas generator is probably lighter than the mechanical means. For the same weight, a satellite could carry a much larger inflatable antenna. This is very important if you are developing a surveillance satellite. A surveillance satellite needs as much gain as possible to detect faint signals that are radiated from transmitters on Earth. One example case for this type of system is ECHELON.

The antenna you see unfurling in the images is a common parabolic design. You can think of it is as a cut out section of a sphere. It's no different than the small dishes used on peoples home to receive satellite televisionThere is more information here on Wikipedia about parabolic antennas.

So in theory inflatable antennas should be used by almost every communication satellite. What I can't find information on is the long term practicality of such an antenna. There are a number of issues with such an antenna. Primarily, micrometeorites and space debris could puncture the antenna's structure. A few tiny holes might not matter. Most satellite carry some sort of propellant anyways, so they could use some of that to keep the antenna inflated in the presence of small leaks. Eventually you'd have so many leaks that you couldn't keep it inflated no matter how much gas you have. So the actual lifespan of such an antenna might be much lower than the commercially available products on the market at present.

Not the answer you're looking for? Browse other questions tagged artificial-satellite experiment antenna expandable or ask your own question.

6
Can mirrors be made from fabric?
3
What is the largest antenna deployed in space?
4
Have inflatable solar arrays ever been used in practice?

21
How many and/or what kind of animals have ever been on the ISS?
7
What was the design and/or results of the fish experiement onboard Space Shuttle Columbia disaster mission STS-107?
8
How can an orbiting spacecraft's motions yield the orbitee's deep structure?
3
What is the large structure in the background of this picture of Molniya 1?
23
What satellites did the Shuttle retrieve from orbit?
9
Is this the longest that a spacecraft "went to sleep" and then woke up on schedule?
11
Did Echo 2 remain spherical without requiring gas pressure? If so, how is this known to be true?
1
How does this antenna work, with both a feed horn and hyperbolic secondary in front of the dish?
1
How did Luna 3's pivoting antennas and ribbon antennas work?
4
How did Sputnik 1's antennas couple to its body, electrically and mechanically?