For the mathematical relationship between J2 (km^5/s^2) and dimensionless J2 - which one is derived from the other?

The article says that when many coefficients in the spherical harmonic expansion are used, they are normalized to the representative radius of the body and its standard gravitational parameter, in this case the Earth. It gives the expression:

where I believe $\mu$ is the standard gravitational parameter also written as the product $GM$, and $R$ is the normalizing radius.

I also see Earth's $J_2$ written in normalized form, as in this article about the JPL Ephemerides DE430 & DE431, Tables 9 and 10 for the Sun and Earth parameters are shown below.

Since conversion between these two representation requires two separate numerical values (the characteristic radius defined by convention and the standard gravitational parameter) one of them can be used without $R$ and $GM$, but the other requires the value for both to be stated explicitly or implied.

Which value stands on its own, and which one is the derived value? This question becomes more important when considering less familiar bodies than the Earth or the Sun (or Jupiter or Saturn), especially irregular rocky bodies such as some asteroids where the definition of a radius may be difficult.

The answer may depend on the method of measurement. I am not sure if $GM$ and $J_2$ (the one with units) can be measured separately, or if it is a radiometric determination.

below x2: From here. 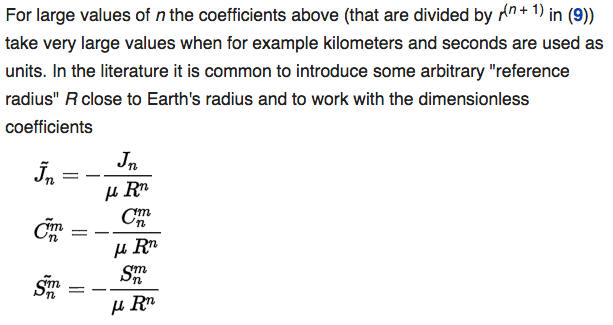 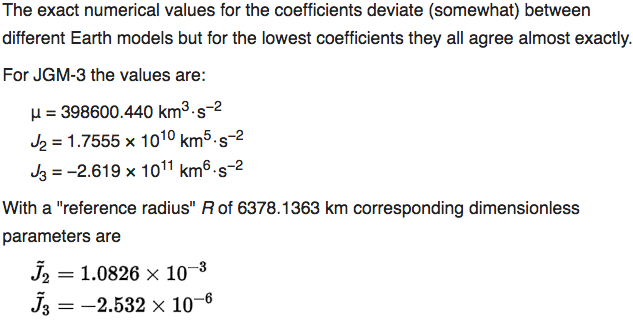 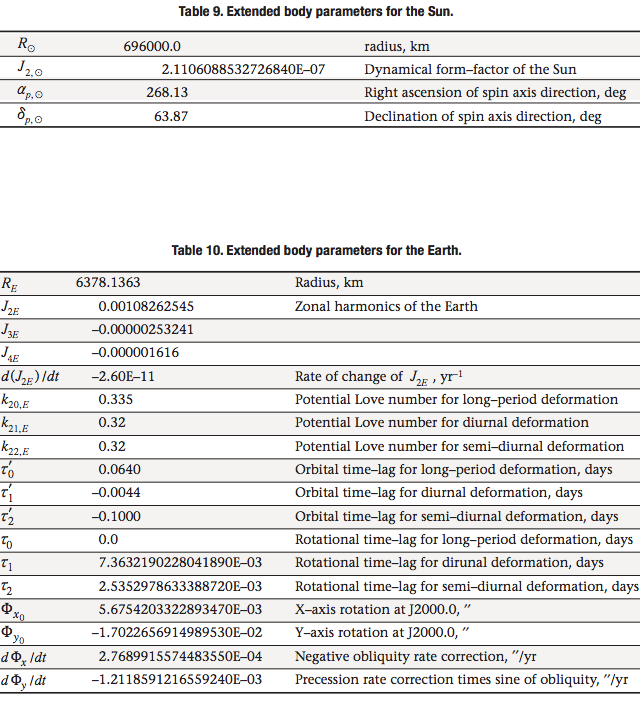 13
Can the Right Ascension and Argument of Perigee of a spacecraft's orbit keep varying by themselves with time?
5
How to determine an algorithm for Low Earth Orbit propagation, considering perturbation from the moon, sun, etc?
6
Physical meaning of perigee advance
7
Why is Nodal precession affected by the rotational period of the planet?
5
Satellites below perigee on Stuff in Space website
6
Orbit Propagator with J2 perturbation has larger error compared with simple 2 body Propagator
5
Trouble deriving rectangular components of acceleration of satellite in orbit around Earth with J2 consideration
4
Are there chances to get a Hubble + ISS Moon transit picture?
2
Have gravitation multipoles of Jupiter and Saturn beyond J2 been measured or at least estimated? At least the zonal harmonics?
4
Mechanics of Sun-Synchronous Orbit & North Korea's KMS-4
See more linked questions

6
Source for up-to-date values of Mars' standard gravitational parameter
14
What is the "specific impulse"?
16
Where to find the best values for standard gravitational parameters of solar system bodies?
1
Equation for orbital period around oblate bodies, based on J2?
2
Ceres gravity from spherical harmonics from Dawn, how to get the coefficients, definitions and potential?
7
How can I verify my reconstructed gravity field of Ceres from spherical harmonics?
8
Zonal vs Tesseral part of geopotential?
1
What are the units for the orbital period equation?
1
Why did my vis-viva math solution get so close despite being wrong? Under what conditions would it have been a good approximation?