How effective are solar sails to deflect an asteroid?

This answer states that solar sails may deflect asteroids. I understand that the goal is to deflect an incoming asteroid enough to avoid collision. I assume painting the asteroid white may also deflect it. Let's say we discover this 10km wide asteroid on year before impact. How much can we deflect it during this year using white painting and solar sails? Is it enough to avoid collision?

EDIT: This question assumes all raw materials to build and put in place solar sails and painting are available and ready to use as I don't want to take into account all the inherent preparation steps to space missions.

Simply white-painting an asteroid probably isn't enough to avoid a predicted collision in typical cases according to my back-of-the-envelope math.

A 10km diameter asteroid has a mass of around 1e15kg.

According to Wikipedia, at 1 AU from the sun (i.e. in an orbit near that of Earth) you get about 9 µN/m^2 of radiation pressure via perfect perpendicular reflection. The cross section of the asteroid is about 8e7 m^2; so if this was a perfect flat mirror facing the sun you'd get 720 N of force. I'm too lazy to work out the corresponding pressure for a sphere, so let's say it's 100 N. That force divided by the mass of the asteroid gets you 1e-13 m/s^2 of acceleration.

1 year lead time is about 3e7 seconds; d = 1/2 at^2 gives you a displacement of around 45 meters. This is well inside the error bars for prediction of an asteroid's trajectory that far out; you wouldn't even know if you'd made things better or worse.

The smaller the asteroid, the bigger the impact of solar pressure -- mass varies as the cube of the diameter, but cross section and thus pressure varies as the square, so the displacement goes inverse-linear with the size of the asteroid. By the time you reach a possibly-significant ~500km displacement, your asteroid is a non-threatening 1m across.

You'd need a solar sail vastly larger than the asteroid, say 1000km x 1000km, to be able to deflect it within a year. You'd probably do better by using nuclear warheads to nudge the asteroid.

The National Academy of Sciences undertook a study, funded by NASA, regarding near-Earth object detection and mitigation. This study looked at four mitigation techniques: nuclear, kinetic impactors, gravity tractors, and civil defense. The study did not address paint or solar sails due to the extremely low level of technology readiness of those techniques.

The results of this study were published in 2010 at https://www.nap.edu/catalog/12842/defending-planet-earth-near-earth-object-surveys-and-hazard-mitigation . The graph below portrays key aspects of their findings. 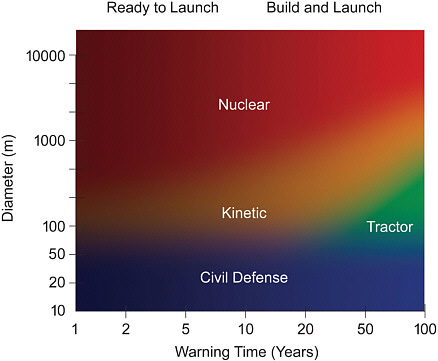 The nuclear option comes in two forms: Disruption and standoff explosions. The intent of the disruptive explosions is to cause the asteroid to break into tiny parts, almost all of which will be placed on a trajectory that avoids collision with the Earth. Unfortunately, this approach will most likely leave at least one large mass that remains on a collision course.

Gravity tractors are devices that maintain a somewhat largish mass close to the threatening object by means of a low-level thrust. Gravitation makes the threatening object accelerate toward the tractor. The low-level thrust keeps the tractor and its massive payload from falling into the asteroid. This is a very slow but steady approach. Multiple decades of operational time are needed to be effective. In addition to the long time span, another downside of this and related approaches is that these approaches require rendezvous, significantly increasing the delta V requirements of such missions compared to the nuclear options or kinetic impactors.

Note that in the above graph, the level of shading indicates the effectiveness of the technique. For an object 10 km across, the only effective technique is the nuclear option, and then only if there is a decade or more advance warning. The question asks about using paint or solar sails for an object that is 10 km across, with only one year of advance warning. Nothing is effective in this extreme case.

What about using paint or solar sails? These techniques (along with a myriad of others) were dismissed out of hand by the National Academy of Sciences study due to impracticality, lack of knowledge, or lack of technology readiness. The Yarkovsky effect, which is what using paint relies upon, is something that suffers from lack of knowledge. Scientists don't quite know the magnitude of the Yarkovsky effect on asteroids. Studying this is one of the key aspects of the ongoing OSIRIS-REx mission. The extremely low technology readiness of this approach also contributes to making this a technique that, at least currently, can be dismissed out of hand from an engineering perspective.

Solar sails might be effective as an alternative to using thrusters in the gravity tractor. An extremely large solar sail to accomplish this, making this a TRL 1 (idea on paper) kind of approach. Tethering the solar sail to the threatening object falls into the sub TRL 1 territory.

Not the answer you're looking for? Browse other questions tagged asteroid solar-sail or ask your own question.

12
Is it (or why is it) worse to break up a asteroid on a collision course with Earth?
5
Extinction asteroid (10-100 km) impact avoidance