Will they really be able to "see" OSIRIS-REx from Australia? With meteor cameras?

Thw news.com.au article NASA spacecraft to fly over Australia during Earth Gravity Assist manoeuvre has some interesting graphics (shown below).

In the article is discussion of meteor cameras, and quotes from Professor Phil Bland of Curtin University in Western Australia, who:

is a member of the OSIRIS-REx science team and also leads an Australian group called the Desert Fireball Network, which, as he puts it, "tracks fireballs coming through the atmosphere.”

Question(s): How close will OSIRIS-REx get to Australia? Will it be bright enough to be seen by cameras used to record meteors? Is there any way quantitatively (gu)estimate the brightness as a sanity check here?

edit: I'll reiterate that. Can the satellite be be seen by cameras used to record meteors?

below: "The route OSIRIS-REx will take over Australia" From news.com.au's NASA spacecraft to fly over Australia during Earth Gravity Assist manoeuvre. Source:Twitter (likely this OSIRISREx tweet with the classic meme theme)

I don't always make a close approach of Earth, but when I do, this is the path I fly over. 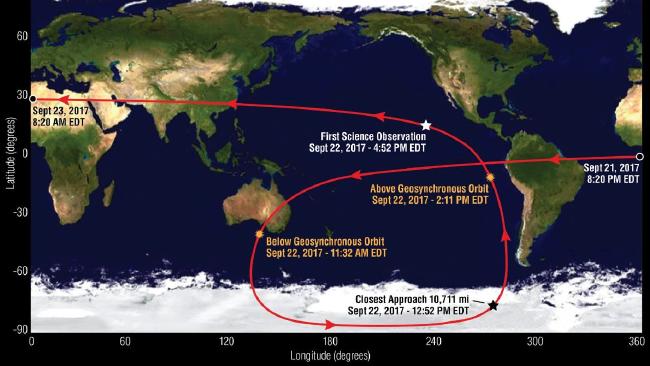 For all those who are interested, here is the preprint of the paper that resulted from the observations and is currently in review. Along with a conference abstract from AMOS 2018.

Optical tracking systems typically trade-off between astrometric precision and field-of-view. In this work, we showcase a networked approach to optical tracking using very wide field-of-view imagers that have relatively low astrometric precision on the scheduled OSIRIS-REx slingshot manoeuvre around Earth on September 22nd, 2017. As part of a trajectory designed to get OSIRIS-REx to NEO 101955 Bennu, this flyby event was viewed from 13 remote sensors spread across Australia and New Zealand to promote triangulatable observations. Each observatory in this portable network was constructed to be as lightweight and portable as possible, with hardware based off the successful design of the Desert Fireball Network.

Over a 4 hour collection window, we gathered 15,439 images of the night sky in the predicted direction of the OSIRIS-REx spacecraft. Using a specially developed streak detection and orbit determination data pipeline, we detected 2,090 line-of-sight observations. Our fitted orbit was determined to be within about 10 km of orbital telemetry along the observed 109,262 km length of OSIRIS-REx trajectory, and thus demonstrating the impressive capability of a networked approach to SSA.

OSIRIS-REx is a NASA sample-return mission to asteroid Bennu. On 22nd September 2017 it performed an Earth gravity-assist (EGA) manoeuvre with favourable viewing opportunities from Australia. The closest approach occurred over Antarctica and it passed over Australia with an altitude of 42,000 – 73,000km. The FireOPAL team built an Australia-wide observation campaign around the EGA. Observers flew to 11 sites around Australia, and one in New Zealand, to take observations. The distribution of sites was chosen to maximise opportunities for triangulation. Approximately 2,000 images of the spacecraft were acquired from each site as it transited over Australia & New Zealand. This dataset, for a single object on a single pass, is unprecedented. It enables us to perform a detailed evaluation of position / range errors for triangulated observations. In addition, lightcurve information from multiple viewing angles for a target of known size and composition allows us to evaluate the degree to which target geometry can be reconstructed from lightcurves.

Yes, if you have a telescope or really good set of binoculars. The article you linked even states this:

“It’s not going to be visible to the naked eye, but really any amateur astronomer with a half decent telescope should be able to do it,” the professor said. “Or a big lens on a regular camera like a telephonic lens, they should be able to pick it up and see it themselves.”

Bottom line is, if you have a telescope and know exactly where to point it, you can see it. Otherwise, it's not that likely.

Not the answer you're looking for? Browse other questions tagged nasa photography visibility-of-spacecraft osiris-rex or ask your own question.

5
How can a meteor gain energy in an encounter with the Earth even though these answers say it can't?
4
From interplanetary space to the Australian Outback, how will Hayabusa2's return capsule be tracked? Desert Fireball Network perhaps?

9
Will any of the COTS providers be able to perform expedited rendezvous with the ISS?
4
How will OSIRIS-REx scan and characterise the near-earth asteroid Bennu?
9
How will Bennu's volatile compounds stay cool and unmodified by the heat of re-entry (OSIRIS-REx)?
14
Will it be possible to see BFR approaching the moon from earth, with naked eye?
2
What's going on with the OSIRIS-REx sample caption video that's circulating on twitter?