Usually if an upper stage experiences a failure before it can "passivate" itself (empty tanks, drain batteries, etc.), it's only a matter of time before it explodes. For recent examples, see any of three Breeze-M upper stages (pictured below), including one that resulted in thousands of new debris pieces in relatively energetic orbits -- the U.S., of course, has also had its fair share of upper stage explosions, although not as many in recent decades.

My question is, what is (usually) the failure mechanism that leads to these explosions? Why is it (seemingly) inevitable?

Note: I am not asking what leads to the initial failure that strands the upper stage in the first place. 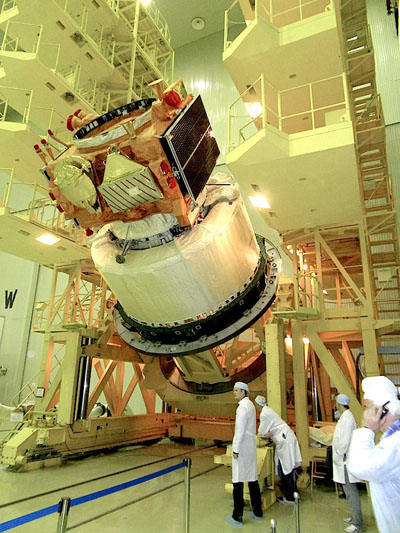 I suspect there is a common underlying reason for all of these events, but if this is considered too general, then please answer the question specifically for the recent Breeze-M mishaps.

Most upper stages need to be flexible to some degree. This requires liquid propulsion of some kind. There are two primary families of propellant for these stages, Cryogenic and Corrosive. Let's take a look at each independently:

Cryogenic- Eventually, the fuel will heat up, to something around room temperature. Room temperature on Earth results because the amount of light hitting the Earth and the thermal energy/ light leaving the Earth sit in a balance. A similar balance will exist in the space near Earth. When the temperature rises, the pressure will quickly rise. Essentially, the limit of pressure will be reached, and like a balloon that is too full, it will explode.

Corrosive- I can't work out a method that will guarantee explosion every time, but here's what I suspect will happen. Eventually, the tank will be penetrated, either via a leak or otherwise. Then eventually the two types of fuel will mix together in an uncontrolled way, causing an explosion. I would say that this isn't guaranteed, but could easily happen. The thermal cycles will also cause stress, which might lead to this happening.

I think its hard to be specific about causes of failure without sight of the formal manufacturer's review.

That pedantically obvious bit aside plausible causes of failure for a Briz upper stage are:

I hope that tidies things up a little.

I actually have a suspicion that the Briz upper stages that have fragmented could all be the Phase 1 variants which, if I recall correctly, did not have so much in the way of end of mission passivation features. Either of the third or fourth explanations could be promoted if the Phase 1 feature is significant.

Nowadays the most commonly used cryogenic fuel is the Hydrogen($H_2$) (That too in the Para form). It has a boiling point at a temperature of 20.37 K and a freezing point of $\approx$ 13 k so one must be very careful in storing Hydrogen because below certain temperature it would freeze and has a chance of blocking the pipeline(But this is impossible because that the Turbopumps used in the cryogenic rockets are more powerful such that it can break the icy Hydrogen) . Another thing is that all metal(including alloys except few) has an increased performance (such as yield strength, Ultimate strength ) but still the fatique strength decrease as temperature reached cryogenic temperature, which means that if the metals at the cryogenic temperatures are exposed to harmonic{cyclic} stress will break. The hydrogen would evaporate at very low temperature and so the pressure in the fuel tank is going to increase so much such that it can explode(very high insulation is required)

They are quite reliable but their disadvantage is that it cannot be turn off once it is ignited .

coming to the Breeze-M they suspect that the bearing in the Turbopump (S5.98) could have caused the problem to the cut off of the engine.I think the reason is since they operate at the cryogenic temperatures the metal would have become very cold (near the cryogenic temperature) since it runs continuously cycle at high rpm . Their strength would has decreased (since the fatique strength decrease at cryogenic temperature) and metals contract at low temperatures(but in this case metals with very low co-efficient of thermal expansion would be used) as the metal shrinks it causes more friction so it would have jammed as it was too brittle there is a possibility of even fracture

9
Do the propellant tanks of actual (not planned) expendable vehicles' upper stages have relief valves?
13
Do space agencies take measures to prevent spent upper stages from becoming space junk?
6
What are the causes of breakups of spent 2nd and 3rd stages, resulting in orbital debris?

22
Where are the upper stages for the Voyager/Pioneer stages?
13
Do space agencies take measures to prevent spent upper stages from becoming space junk?
5
Could upper stages take down space debris as a 2nd mission?
6
What are the causes of breakups of spent 2nd and 3rd stages, resulting in orbital debris?
12
What exactly is the orange insulation foam used on many different launch vehicle stages?
4
Why haven’t upper stages used the RL-60 engine?
7
Which rockets have their upper stages separating at(around) 100 km?
4
Testing of a first stage using dummy upper stages?
1
Why not add tracking features to upper stages? Has something like this ever been proposed?