I was reading about the Robot Operating System ROS, and in particular the 2014 ROS.org article ROS running on ISS and wondering if the Robonaut is being actively tested on the ISS.

Do they take it out, turn it on, and let it roam around from time to time?

According to this answer, there were some initial tests and some problems about two years ago. Has there been any change of status since then?

ROS was delivered to ISS aboard a SpaceX rocket as part of a recent resupply mission that also included a set of robotic legs that will be attached to R2 soon.

NASA was able to upgrade the R2 torso earlier this month after on-orbit surgery to remove old processors and electronics and install new ones. On August 12, R2 powered up using ROS for the first time.

As we mentioned in a prior post, the R2 team at JSC has been using ROS for R2 development on Earth for the last couple of years. They combine ROS with OROCOS RTT to produce a flexible development environment with real-time capabilities.

As a side note, there was a ROS Robonaut Simulator package at one point (see also here) that you could run at home, but I am not sure this is still an active project. 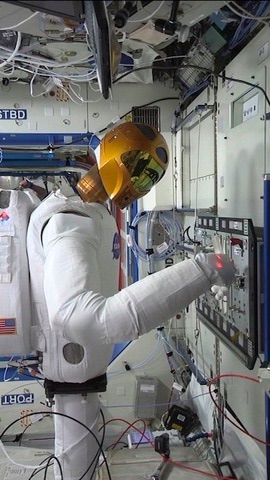 As of March 4, 2018, it appears that they are mailing Robonaut home!

Robonaut: The crew prepared and stowed Robonaut in preparation for return on SpaceX-14. Robonaut is a humanoid robot designed with the versatility and dexterity to manipulate hardware, work in high risk environments, and respond safely to unexpected obstacles. It is comprised of a torso with two arms and a head, and two legs with end effectors that enable the robot to translate inside the ISS by interfacing with handrails and seat tracks.

Rationale can be found here

For the last several years, Robonaut has been almost entirely disabled, and publicly available ISS status reports show that the last time the robot completed a full research task was December of 2013. This week, NASA announced that it is bringing Robonaut back to Earth to be fixed.

Not the answer you're looking for? Browse other questions tagged iss robotics ros or ask your own question.

10
What kinds of things have been tossed out of the ISS?
8
Machine Learning and Classical Navigation, Guidance and Control in Space Exploration
8
What is/was the point of Robonaut 2? Has it accomplished anything?
2
Will Astrobee be the second time that an autonomous, mobile robot will use ROS in space?

5
Why a humanoid robot and not a dedicated drone style one?
10
Was this printer shown the ISS in 2015 built specially to work in microgravity?
9
Who is the space artist? Patterns on the Spheres robots on the ISS
4
Is 45 km unusually close to pass the ISS and deploy a microsatellite without warning?
12
Do ISS astronauts notice, or experience symptoms of elevated CO2 levels? Do they wear monitors regularly?
31
Why does the ISS have so much pressurized but uninhabitable space?
2
Will Astrobee be the second time that an autonomous, mobile robot will use ROS in space?
9
Are all DC motors on the inside of the ISS brushless?
38
What language is software running on the ISS written in?