I've heard that counting impact craters is a great way to figure out how old the surface of a planet is, but I've never heard what the actual rates are. Do they vary from planet to planet? Anything else that should be noted in crater counting?

In terms of using cratering as a means to determine at least an estimate of the age of the planet, there are some theorised commonalities. In particular, according to the Lunar and Planetary Sciences webpage Shaping the Planets: Impact Cratering, state a couple of general principles:

older impact basins are larger than the more recent craters.

They are also more eroded/destroyed on planets that have appreciable atmospheres or volcanic activity, such as Venus, Earth, Titan and Triton (there are more examples of course). On planets that a don't have these, a general rule is

On planets where there has been, for whatever reason, some resurfacing, Planetary surface dating from crater size–frequency distribution measurements: Partial resurfacing events and statistical age uncertainty (Michael and Neukum, 2010):

The concept is to fit the observed crater size–frequency distribution (SFD) of a given surface unit to a known crater production function (PF), and to use the crater frequency for certain crater sizes together with a calibrating chronology function (CF) to obtain an absolute age.

The absence of a particular diameter crater(s) can also determine when a resurfacing event has occurred, particularly volcanism and even the presence of a stronger erosion/depositional cycle at certain times.

To clarify this, an example about the cratering around the time and after the eruptions of Mars's Olympus Mons have been summarised in the webpage Olympus Mons, specifically:

The theory behind crater retention age dating is that more densely cratered surfaces are older than sparsely cratered surfaces because of differences in exposure to bolide impacts (Hartmann, 2005). Numerical ages from craters have been determined from cratering rate frequencies and dated Lunar rock samples (Hartman, 2005). From this lunar data, isochrones for various bins of crater diameters over a given areal extent have been established for Mars (e.g. Hartmann, 2005).

As shown in the diagram (and example below): 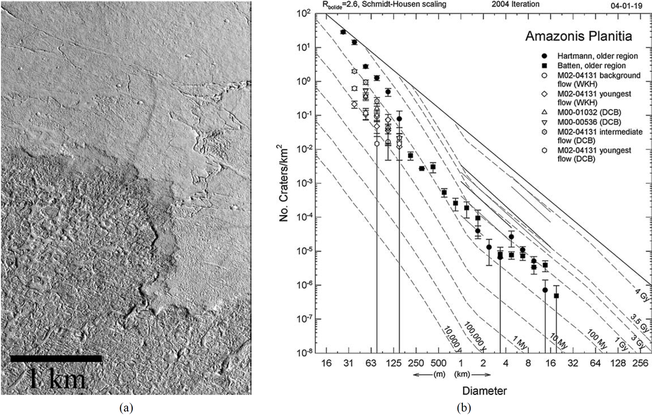 The reference used for this explanation and the image is from:

Why base it on the lunar samples? It is because we have been there and have sampled the data and made the age-size-frequency graph in the diagram above.

Not the answer you're looking for? Browse other questions tagged planetary-science geology or ask your own question.

11
Any explanation for morphology of within crater formations on the northern Nili Patera caldera of the Syrtis Major volcanic plain of Mars?
8
Why does the Moon's Anaxagoras crater seem sort of jumbled?
19
What defines the radius of a ball of gas like Jupiter?
16
Where to find the best values for standard gravitational parameters of solar system bodies?
0
How did Mariner 2's ridged radiometer dish focus two microwave bands but diffuse IR?
2
Just how huge is Mars' cloud of hydrogen?
3
What is "Planetary Defense", and what are the threats one can potentially defend against?
10
How hard is the hardest ice in the solar system? Is it in Pluto's ice mountains?