Could daily variations of weight on Earth really be 0.003%?

I've been reading about accelerometers. On earth, in a lecture demonstration, in a table-top experiment, they will generate a signal equal to the sum of the acceleration you'd like to measure plus the local acceleration due to gravity and all of the other accelerations of our laboratory frame.

Local gravity on the Earth's surface varies a few tenths of a percent; strongest at the North pole and weakest in equatorial mountains, due to variations in the distance from the center of the Earth and other mass-distribution effects.

There is also a variation in the centripetal acceleration due to the Earth's rotation from pole to equator, which points away from the Earth and further decreases local acceleration near the Equator. All together, it's about a 0.5% maximum difference.

There is a great inventory of these variations in this answer and I'd recommend a visit there if you are interested.

But my question is about daily variation in local acceleration due to the rotation of the Earth with respect to the Sun and Moon.

I was reading the document Precise Measurement of Mass, presented at the 60th Annual Conference of the Society of Allied Weight Engineers Arlington, Texas May 21-23, 2001 by Richard Boynton of Space-Electronics.

One statement on page 8 surprised me:

1.5 Tidal variations An object on the surface of the earth is attracted to every celestial body. Most of these masses are too far away to have any significance on weight, but the sun and the moon do have a significance. If you have a scale whose accuracy is 0.003 % or better, you will notice that the weight of an object varies as a function of the time of day. This effect is most pronounced during spring and fall when the sun and moon align. This produces the “neap tides” that often cause flooding of marinas at these critical dates. (emphasis added)

The figure of 0.003% is repeated twice more in other sections.

I have tried to reproduce this number, but it seems high by about two orders of magnitude.

The tidal effect I know how to calculate goes as follows. I like to imagine being an astronaut in the ISS, orbiting the Earth. At that low altitude Earth's gravity is almost as strong as it is on the surface, but an astronaut in the center of the ISS will not experience any acceleration with respect to the ISS since they are in the same orbit.

Question: Have I done my calculation correctly? Is the figure in the paper a factor of 100 too high?

note 2: FWIW, the paper points out that the company is selling scales with a precision of 0.002%. 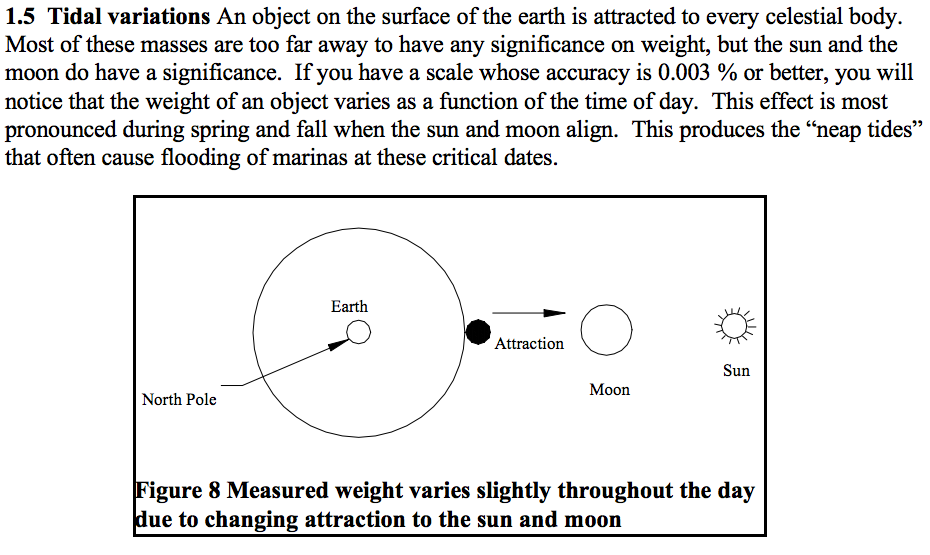 At all times, most of this force is counteracted by the centrifugal force of the rotation of Earth around the barycenter of the Earth-Moon system, resulting in the small tidal force calculated by @uhoh.

In summary, even if we ignore the revolution around the barycenter of the system and make the Moon vanish instantaneously, the felt change in gravitational force would be $0.0003\%$ at most.

The reported difference of $0.003\%$ would be plausible, if the difference in measured weight (acceleration) was caused by the fact that the gravity of the sun acts in roughly the same direction as the Earth's gravity at midnight and roughly in the opposite direction at noon. But this is wrong.

Since the exact same accelaration affects the scale, the reading on the scale is unaffected by the alignment of the gravity of Earth and Sun (thx @asdfex for pointing it out).

7
Could we send lots of cheap measurement devices in random directions into the space?
34
What causes microgravity (i.e. non-zero gravity) in orbit?
9
Does a persons weight affect their potential selection to be an astronaut?
11
How did the Space Shuttle maintain thrust/weight balance
6
Is it possible to simulate Mars gravity on Earth?
6
Could the Galilean moons tidally lock Jupiter?
4
What are the biological effects of a toe-to-head force gradient upon a human over the long term?
8
Is there a change in altitude when "falling around earth"?