Time to prepare for EVA out of ISS

How much time is needed to an astronaut on ISS to prepare herself for an EVA? Is this time so much different from time needed during Apollo missions?

There is no emergency escape procedure onboard the International Space Station (ISS) that would involve Extravehicular Activity (EVA). If you'd be racing in your space suit, be it the Extravehicular Mobility Units (EMU) or the Russian Orlan-M space suit, it would be from your EVA back towards the ISS's Joint Airlock "Quest", like the Italian ESA (European Space Agency) astronaut Luca Parmitano did during his second EVA when his EMU helmet started filling with cooling water originating from his PLSS (Portable Life Support Unit): 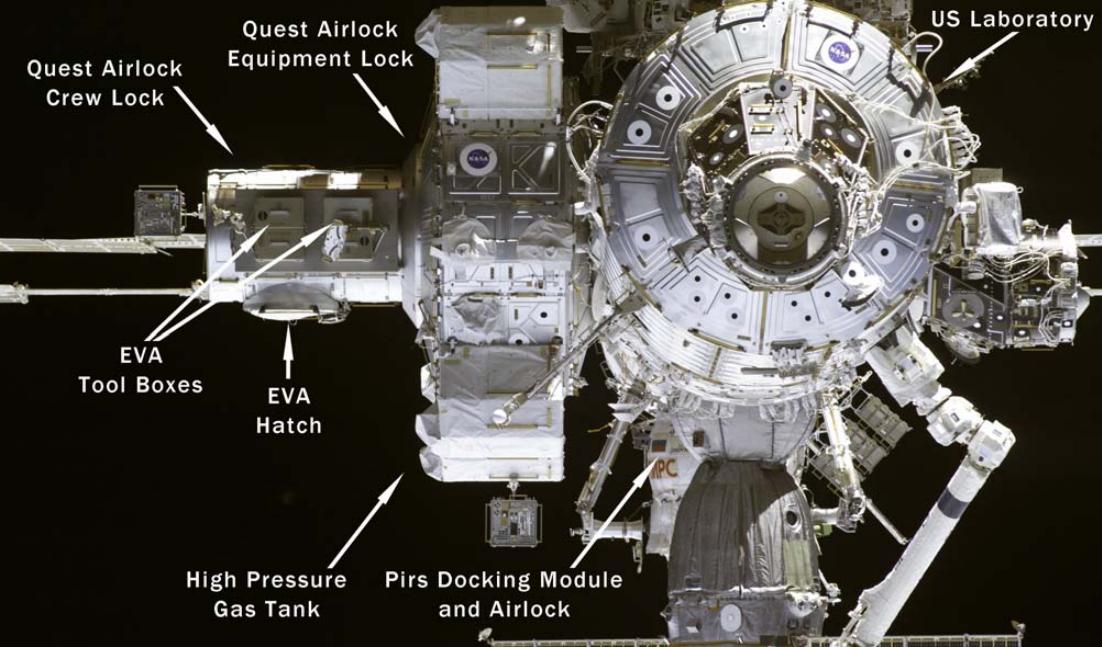 View of the Quest Airlock (left) taken from Space Shuttle Atlantis during docking procedures on 9 April 2002 as part of the
STS-110 mission to the International Space Station. (Image: NASA)

Which space suits are onboard the ISS was also already covered in this answer, and I'm saying all of this so there won't be any expectation that the procedure of getting into one's space suit would be a timed or a life-saving racing event.

Before the airlock hatch is opened and the EVA gets underway there are lots of preparations that have to take place to make sure that the EVA proceeds seamlessly. We'll be the most interested in the EVA donning procedure, but for the sake of completeness, I'll include shortened versions of the complete Standard EVA Preparations, taken from the ESA's EVA support information brochure (PDF):

I've somewhat shortened the other points we're not as interested in to answer your questions, but the full description and many more photographs explaining the procedure are available in the linked to brochure. As you can see, these procedures are laborious and time consuming. Donning of the spacesuit might be the shortest of the procedures, but would in reality still take hours, with the soon to EVA astronauts possibly already in the Lower Torso Assembly long before donning the rest of the space suit and all the equipment that attaches to it.

So, to conclude, we could say that all procedures involved take at least one day, and the donning of the spacesuit itself maybe a few hours? Nobody would be racing either, there's way too many things to check and recheck, complete spacesuits are essentially your mini personal spaceships with all the bells and whistles and that means they're complex while trying to be as ergonomic as possible once you're in them. Comfort of getting in and out of them was somewhat sacrificed for that. And you can't just walk out of the station either, once in the suit. Depressurization of the airlock prior to egress will take some time, and so will repressurization and sometimes purging of possible contaminates (like ammonia that is used as external cooling liquid and those systems are often worked on during EVAs, if it couldn't have been baked-off during EVA with exposure to the Sun or airlock sensors still detected some despite attempts to not bring any in) during ingress.

Some of it depends on which space suit they will use. There are two sets of suits at the station. The Russian Orlan suits and the US suits.

The US suits require customization to lengthen/shorten bits so it fits properly. Earlier suits were customized per use on Shuttle flights and took hours or days by trained technicians to adjust. The current suits on the station are upgrades that are easier and faster but still take some time to adjust.

So first EVA by an astronaut in a US suit takes longer than the second, due to this issue.

19
Do astronauts on board the ISS have a backup spacesuit?
16
What was the source of the fluid in Luca Parmitano's suit?
4
What is the fastest time for donning a space suit?

9
What is the biggest number of astronauts in EVA at the same time ever reached in space history?
15
Why do ISS astronauts use lower quality microphones for official radio communication than for PR events?
10
Cost of an EVA on the ISS?
4
What is the fastest time for donning a space suit?
5
How do astronauts deal with micrometeorites during EVA?
3
Have astronauts gotten sick on EVA?
4
Were shuttle and ISS spacewalks always done with two astronauts?
24
How do EVA suits manage water excretion?