How long is the ISS out of reach of all ground stations?

This is a followup to a recent question and answer discussing ground-based monitoring of the International Space Station, specifically in the context of an astronaut crew that is all asleep.

How often is the ISS outside of reach of all ground stations? How long is a typical such period, and how long is the longest possible such period?

In order to answer this question, I tracked down Michael Lammers who the Flight Director for the ISS and he kindly offered to speak to me on the phone about ISS communications. (He is also a super nice guy)

He said that almost all of the ISS Command and Control, Voice Communications, as well as science downlink, goes through TDRS with the Ku-Band handling HDEV, Voice channels 3 and 4 and other high bandwidth communications. The S-Band handles critical systems, command uplink, and voice channels 1 and 2.

TDRS is a shared resource and is mostly computer scheduled and he said that HDEV is a good proxy for when the S-Band is up (S-Band has a little higher availability), they share it with Hubble and other resources as well as some launches.

Nominally TDRS is available 80-85% of the time with 10-15min dropouts due to random blockages by station parts, and other users (each TDRS satellite can support 2 high bandwidth users). The longest such dropout in normal operation is around 15 mins. This depends on scheduling (i.e. you could schedule no comms for a whole day if you wanted)

During critical times (such as the spacewalk on 5th October 2017 during Expedition 53) they will look at the outage schedule that is computer generated and if something lines up poorly then they can request that the TDRS schedule be readjusted; on that occasion they only had one outage all day which was 5 mins long.

There are other communications platforms on the ISS, but they are all there to support TDRS in Science downlink not providing primary or (as far as he knew) contingency communications.

Other Comm systems onboard:

Cool picture from This PDF of ISS info showing all the Comms systems onboard (I only talked about the ISS to ground ones here): 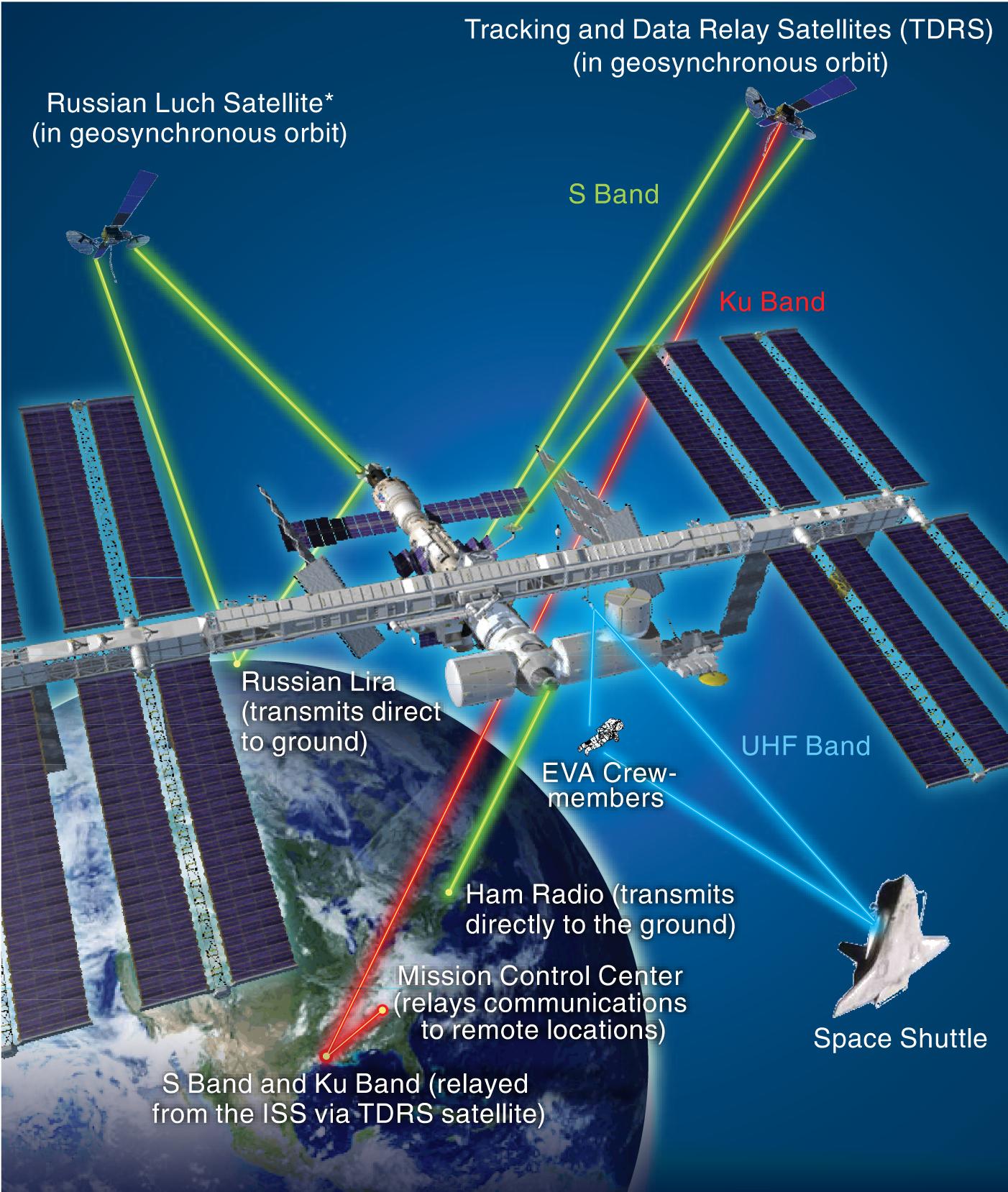 Not the answer you're looking for? Browse other questions tagged iss ground-station mission-control or ask your own question.

43
Does the ISS have a watch system with at least one person monitoring at all times
11
Do antennae on the ISS have to constantly move to maintain data links?
12
When does the ISS have a loss-of-signal?
4
Is TDRS-M (TDRS-13) where it's supposed to be?
5
How many ways of communication with ground can ISS crew use?

24
How often are ISS computers (MDMs) replaced?
32
What are the procedures aboard the ISS in the eventuality of a loss of a crew member?
12
With one out of two Thermal Control Systems on ISS malfunctioning, how long can Loop B keep up with increased load?
15
Which, if any, US laws apply on the ISS?
5
What kind of condition do Orbital Replacement Units (ORUs) keep while mounted on the outside of the ISS?
26
How many times were there thirteen people inside the ISS? Is it hard on the station?
1
Would adding a long pole to the International Space Station keep it from tumbling via gravity gradient stabilization?
3
Where all is ROSA (roll-out solar array) planned to be used?
23
If you release a tool outside the ISS in space will it remain at the "same" place forever?