Any explanation for morphology of within crater formations on the northern Nili Patera caldera of the Syrtis Major volcanic plain of Mars?

The Nili Patera region has enjoyed fairly good media exposure recently, ever since high detail HiRISE (High Resolution Imaging Science Experiment) photographs hit the Internet, showing fabulous sand dunes to the south of the region in all their glory. Just to refresh your memory, or in case these photographs didn't reach you, here's a small preview of these aeolian formations, areology-wise short-lived migratory topological features of the Syrtis Major Planum:

Nili Patera dunes, while indeed lovely, are however hardly an unexplained phenomena.

Looking at results of some Mars Odyssey THEMIS (Thermal Emission Imaging System) observations though, I've noticed something rather peculiar within the impact craters in the otherwise sandless North by Northeastern part of the Nili Patera region. Seemingly regular shaped protrusions, straight or only slightly bent ridges nearly parallel to each other that appear almost as if, tongue-in-cheek, Martians were keeping a hand-drawn score on how many times Voyager 1 was believed to have left the Solar system. Smaller craters have one straight ridge in them, slightly bigger ones maybe two to three, and larger ones - albeit still relatively small craters on global Martian scale - three or more of these ridges. This is what I'm trying to describe: 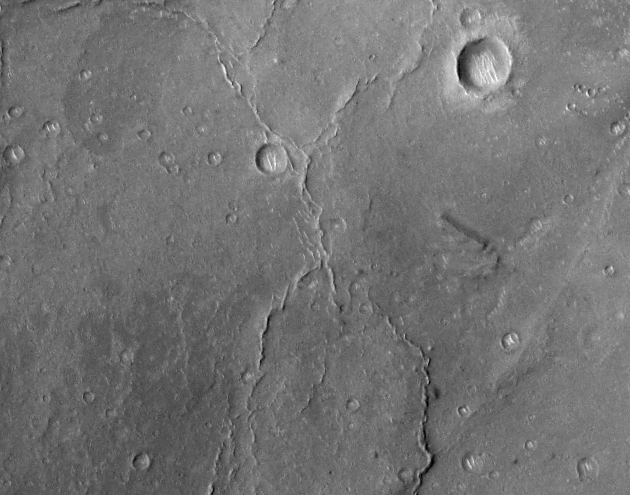 These within impact crater ripples only appear in the roughly 2 km depressed region of Nili Patera caldera, and the craters on the top plain surrounding this volcanic caldera bed appear clean from this phenomena. My first impression was these are smaller sand dunes, remains of aeolian sedimentation from the dust blowing from the higher plain onto Nili Patera and keeping some of this sand trapped within the even more depressed impact craters, but I later realized THEMIS images are actually recording heat signature, and sand would have to appear on average darker, just like the sand dunes to the South do on the same source image.

I did a bit of digging around to answer my question, and indeed found somewhat related blog post by Emily Lakdawalla, after one of her HiWish requests for HiRISE to focus on one of the Nili Patera butterfly (low-angle impact) elliptical craters has been granted and results came in. Sadly though, that particular crater doesn't show same ridges in it like the ones I'm inquiring about. While there is a central scar in it along the path of the impacting meteor, it is not nearly as seamless as the ones from the THEMIS image appear to be: 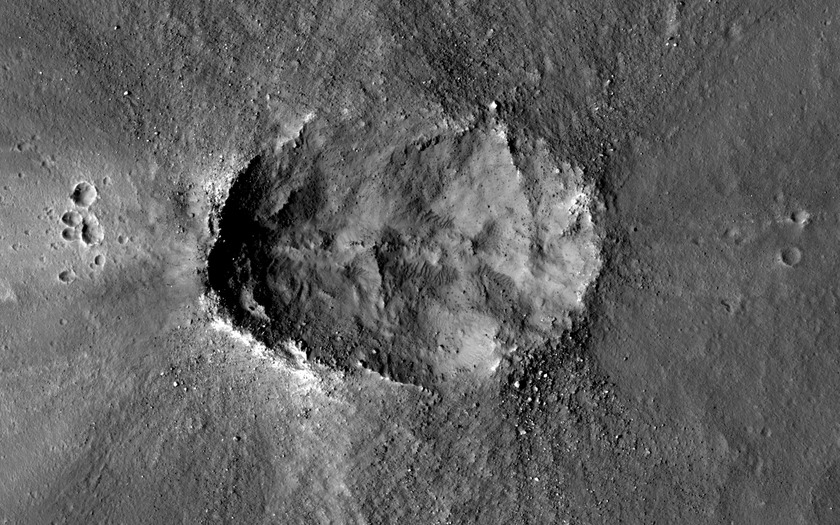 So, failing to find an answer on my own, here's my question:

What is causing these seemingly seamless and regular shaped protrusions within the impact craters on the Nili Patera caldera? What is the story behind their formation, and do we have any physical models that would explain their shape and number?

The following is one possible explanation

These interesting looking features, when viewed differently have the appearance of being fluvial deposits (like from a river or stream). Using the 'true-colour' image, adapted from the HiRISE IRB you provided in chat: 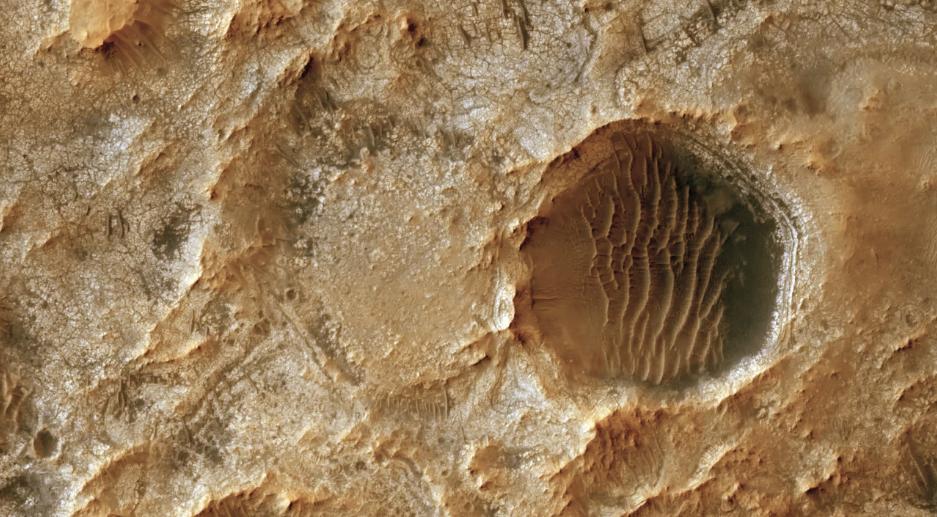 One can see that it appears to be a larger version of the following landform:

The image above are described as fossilised ripple marks from the Waterton Lakes National Park page of Parks Canada (also the image source). However, the ripples in the Martian crater are considerably larger than the example in Canada.

According to the HiRISE page Channel into Jezero Crater Delta, the environment around the Nili Fossae region, that have similar geomorphological features (as seen in the image below): 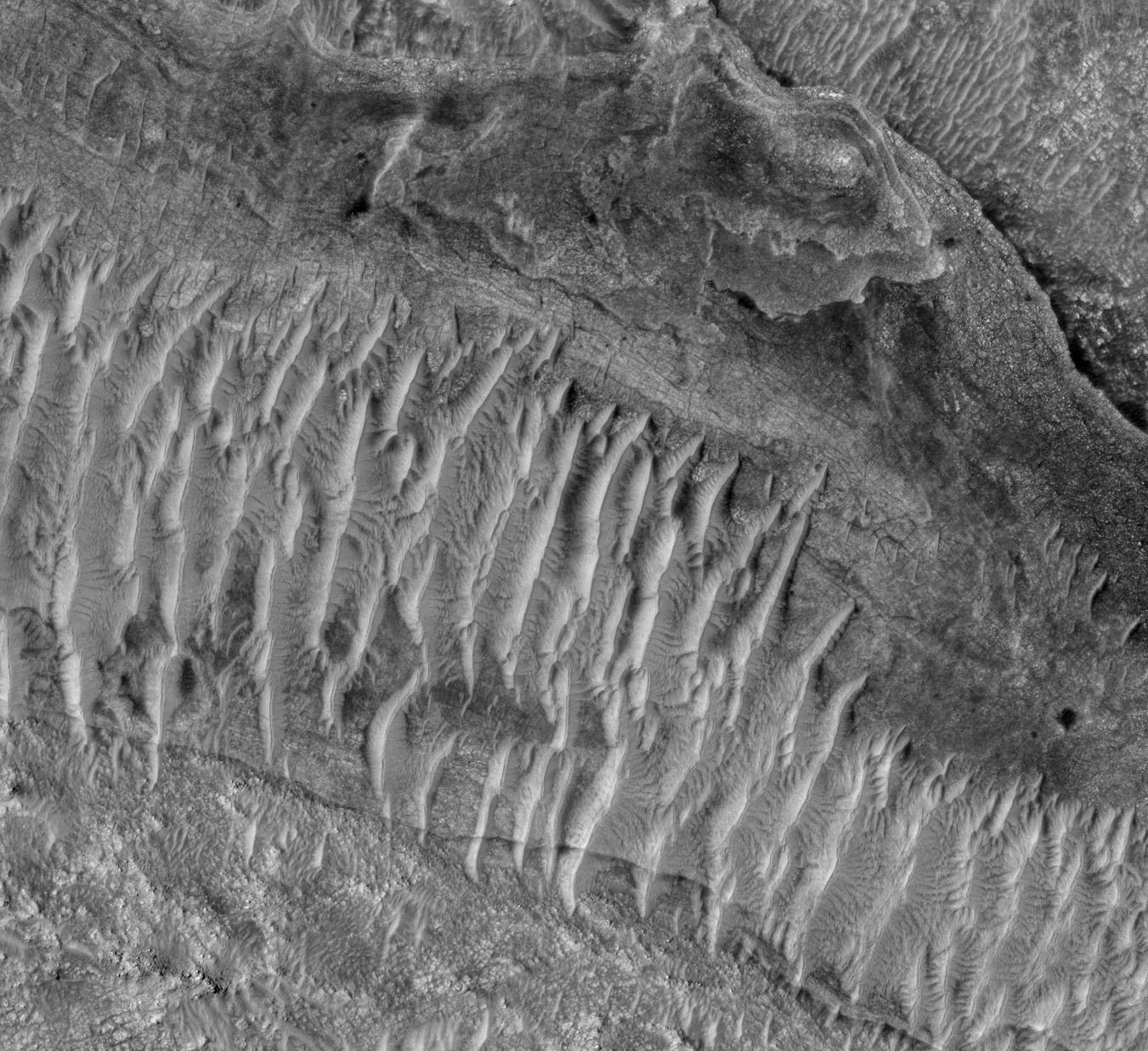 this water-carved channel in Nili Fossae region transported sediments across the Martian surface and deposited them on the floor of an impact crater just south of this image. The sediments were deposited in a delta-like mound on the floor of Jezero Crater, suggesting that the crater may have contained a lake at the time.

Essentially meaning that the features in these craters could be the remnants of a lake, that had water draining into it.

Not the answer you're looking for? Browse other questions tagged planetary-science impact mars crater or ask your own question.

36
What would it feel like to be in a Martian dust storm?

1
What is the meaning of twelve months for climate at Gale Crater, Mars?
11
Are there any major flaws with the Mars Architecture used in the Martian?
10
How much elevation has Mars Curiosity climbed so far from the bottom of Gale crater?
10
Is there really a frozen lake near the equator on Mars?
3
What is the real depth of the Mojave crater on Mars?
3
What can cause grooves (stairs like) features on Mars's ground that is opposite to water flow direction?
6
White crack infill on the surface of Mars in the Gale Crater