Has anyone here ever done enough back-of-the-envelope math to come up with a rough estimate of the maximum landing range of the F9 first stage? I'm talking unladen-swallow-quality math here -- trying to think through just how far F9 is from BFR-like point-to-point ops today, assuming no payload and from a technical standpoint only, ignoring permitting, landing zone availability, etc. (Seems like someone would have discussed this in public already, but I'm not finding it.)

I'm trying to get my head around the math, and I'm realizing that (a) it's been a long time, and (b) it's all about managing re-entry energy, I think...

I got 4,052km on flightclub.io, but it was a bit of a struggle. I had to glide quite a bit between entry and landing burns to bleed off velocity that I didn't have the fuel to remove propulsively, and that extended my range quite a bit.

That said, there may be flight profiles that are more efficient than mine - for example my profile stays quite low in the atmosphere, as I needed to execute the pitch kick quite early to get as much downrange velocity as I could before MECO.

Maybe there is a profile that executes a high-thrust, quite vertical burn to get out of the atmosphere, coasts to near-apogee and then executes a second burn, free from atmospheric and gravity drag to get the downrange distance. Feel free to play around yourself.

To glide between entry and landing, remember that you're travelling engines first, so you want to make sure your pitch angle has a lower magnitude than your velocity angle (i.e you have a positive angle of attack). The larger that angle of attack (up to ~15$^{\circ}$), the more lift you'll experience and the more velocity you'll bleed off before your landing burn.

The flight profile I built can be viewed here and the simulation results are here. I've included some plots of my results below. 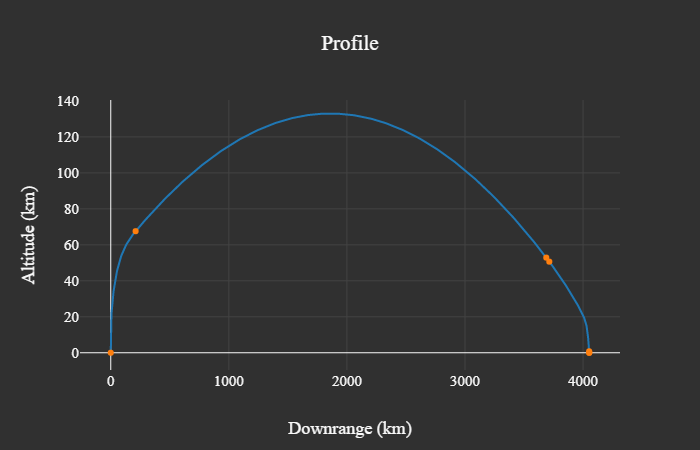 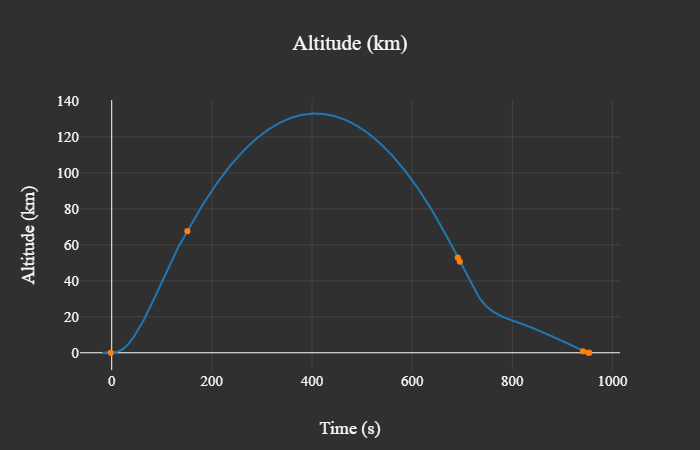 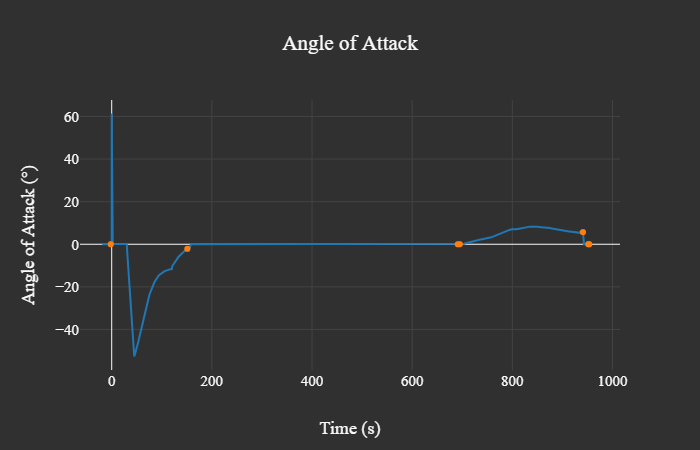 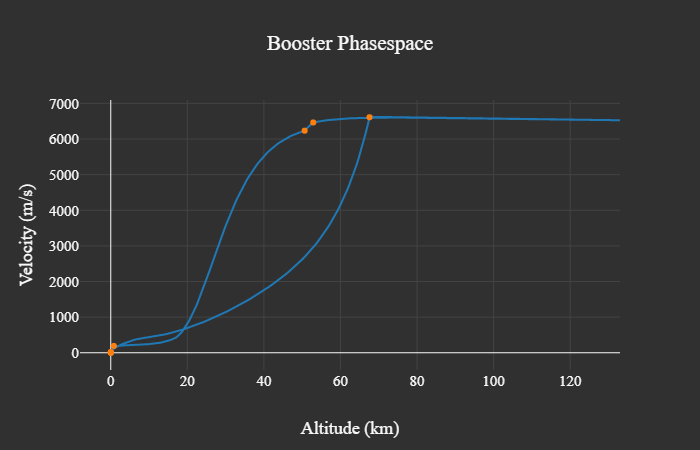 This was actually a killer. I only made it to ~1,750km downrange. 5km/s of my $\Delta V$ was used in the initial burn which began to heavily throttle about 30s before MECO to keep within 6gs acceleration. This incurred pretty heavy gravity losses so our MECO velocity was only 3.6km/s.

The entry burn needed to be extremely long for us to calm down to a manageable speed entering the atmosphere. Specifically, I used ~2.3km/s of $\Delta V$ for the entry burn but the final 10 seconds of this were also throttled to stay within limits so extra gravity losses were incurred here too. After entry burn cutoff, the atmosphere burned off ~1.3km/s of velocity and then the landing burn had enough propellant remaining to finish the job.

Here are the corresponding plots to the previous simulation: 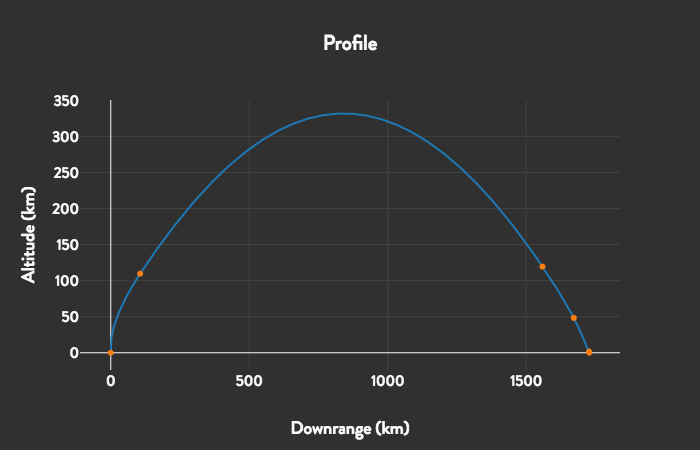 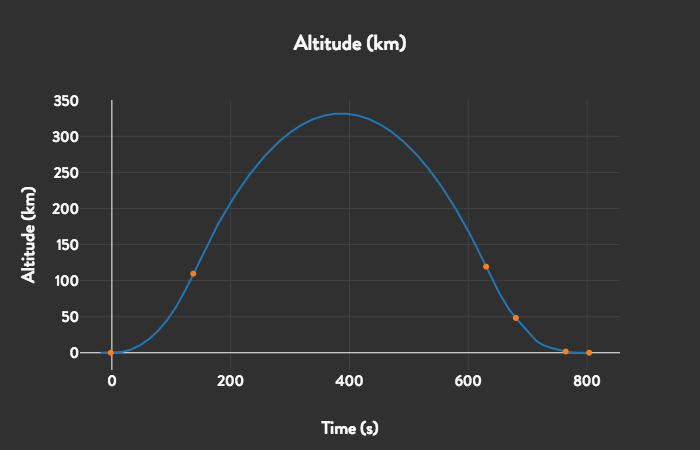 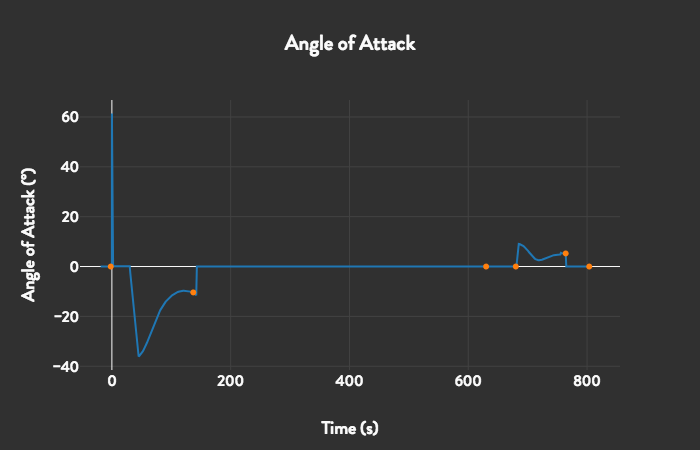 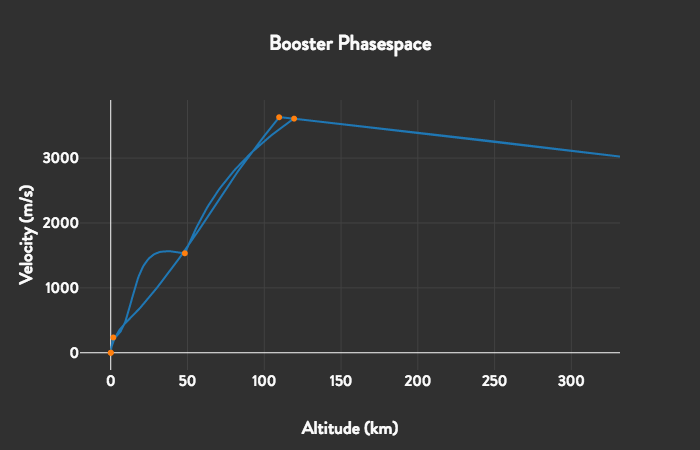 I can't remenber the entire math/base values and am rounding the values abit. We have a rocket with about 300(SL) to 340sec(vac) and a dry mass of 5 or 6% Can't remenber for sure. lets assume 6% that gives an "avg" of 327sec in a relativelly shallow launch profile.

A single stage migth be able to reach orbit or near orbit, though without any payload. Not very good for sensing cargo to LEO but plenty reach anywhere on earth even shooting for a retrograde suborbit.

The minimun to reach anywhere on Earth is no more tham 8km/s if I'm not mistaken.

Not the answer you're looking for? Browse other questions tagged orbital-mechanics spacex falcon-9 sub-orbital or ask your own question.

9
Can five refillings of the BFR second stage be useful to get to the Moon? To Mars? All five in Earth orbit?

9
Would a point-to-point suborbital spaceflight have a "negative" perigee?
12
Falcon 9 Range Safety
12
Can SpaceX Falcon 1st stage hover during landing?
7
How many engines are restarted for landing the falcon boosters
2
Could the Space X "Starship" be modified for point to point travel on Earth?
12
Falcon-9/Starship landing on an uneven surface
1
Falcon 9 landing stages