Can five refillings of the BFR second stage be useful to get to the Moon? To Mars? All five in Earth orbit?

EDIT: Here are some BF numbers from the video:

On-orbit refueling of the SpaceX BFR upper stage is necessary for trips to the Moon and Mars. In the presentation at the "International Astronautical Congress (IAC) in Adelaide, Australia, SpaceX CEO and Lead Designer Elon Musk (provided) an update to his 2016 presentation regarding the long-term technical challenges that need to be solved to support the creation of a permanent, self-sustaining human presence on Mars."

In the YouTube video after 27:17 the value of orbital refueling is discussed, along with a calculation of payload mass versus delta-v for what looks like different numbers of tankers and refillings.

At a later time 32:06 the task of bringing cargo to the Moon for a base station is described, and the refilling(s) is(are) shown to happen in elliptical Earth orbit.

If five refillings are used as shown earlier, how much cargo can be brought to the moon, roughly?

Could five refillings be used to get to Mars? Would the last one or two actually have to take place beyond Earth orbit to be useful? note: unlike the proposed Moon mission, the proposed Mars mission includes a refueling at Mars with propellent synthesized from Martial water and carbon dioxide. 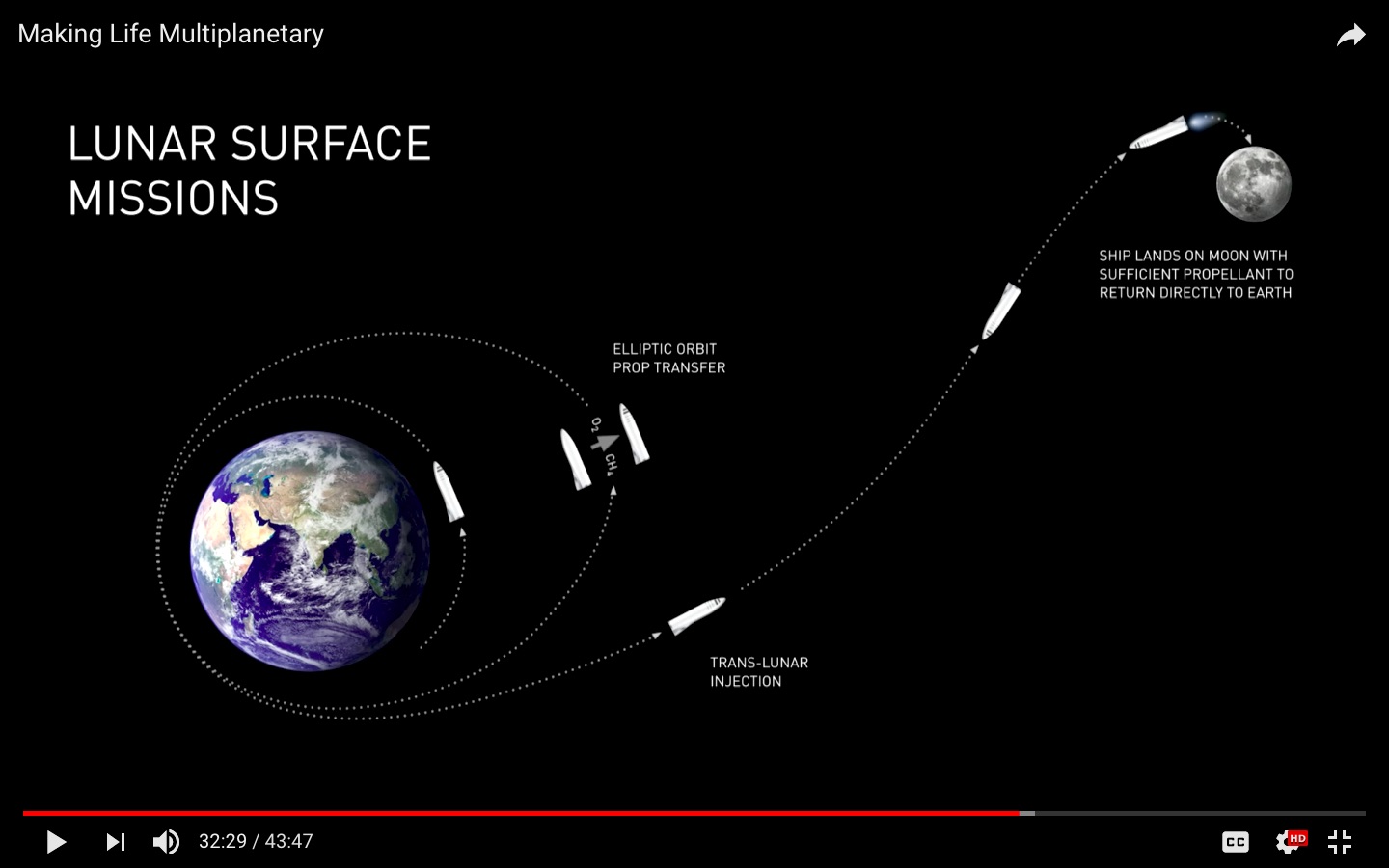 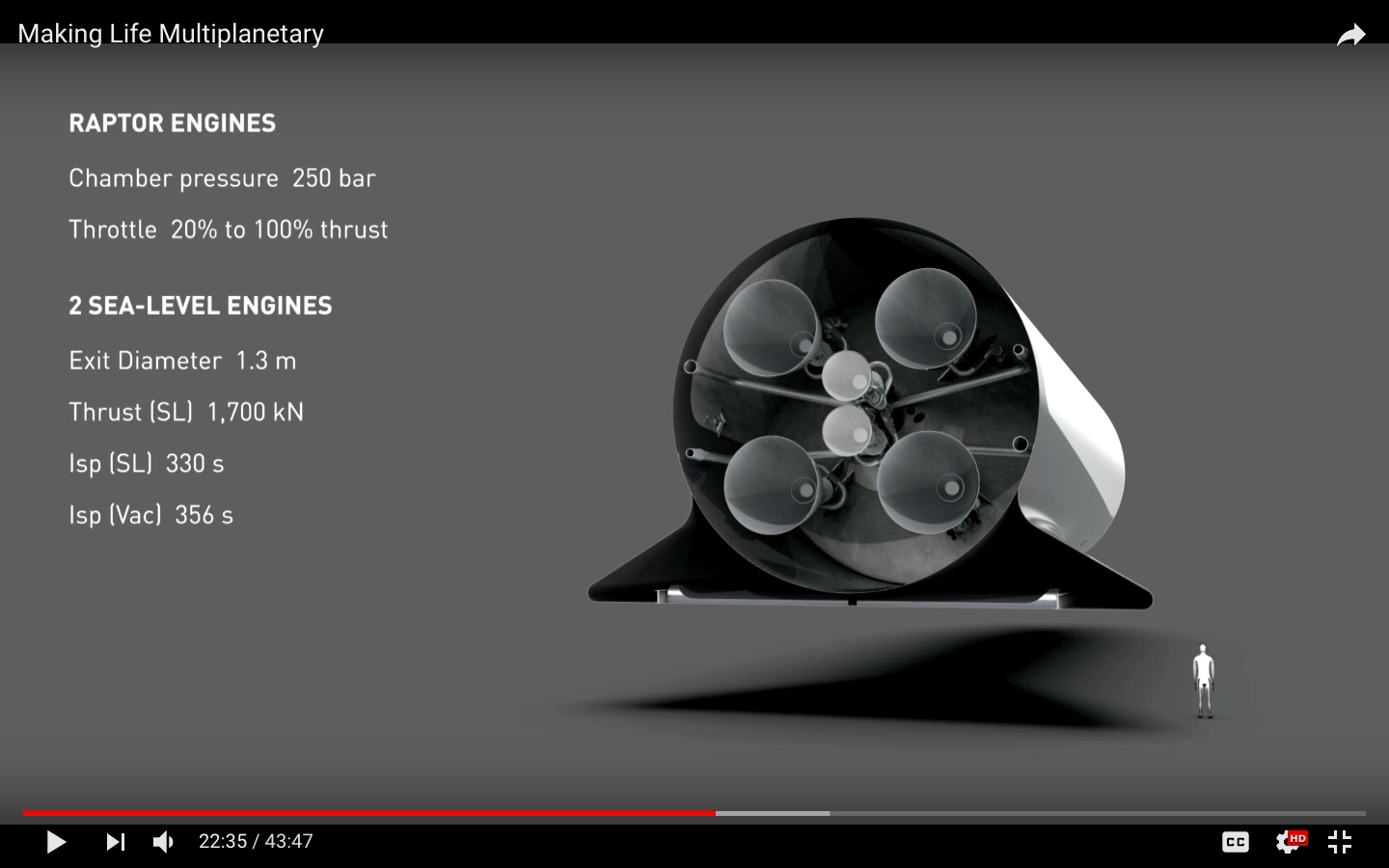 First of all, let's look at what the delta V is for a fully loaded BFR upper stage in orbit. Given the Delta V tables shown, and assuming 150 tons, a delta V of 6.2 km/s is shown. 150 tons is assumed because that is the mass to LEO provided. As I understand it, these numbers come from a tanker orbiting Earth approaching the payload, and refueling it.

It seems to me that the Moon mission would involve at least some refilling in LEO, and some in an elliptical orbit. I'm not sure of the number of refillings, but I would suspect there is more than the standard (5?) that is required for a deep space mission, say to Mars. The Delta V to land on the Moon from LEO is 5.9 km/s or so. Thus, a BFR could get from LEO to the Moon's surface, but couldn't return without refueling. I can't find the exact delta V required to get to Earth from the Moon's surface, but it is around 2.74 km/s. Therefore, the elliptical orbit must use around 2.5 km/s of delta V, and be fully loaded, in order to get to the Moon without refueling. That is entirely possible, but it will be a significantly elliptical orbit, something on the order of to the GEO belt, so far as I can tell.

I assume that what will happen is that the tankers will fuel the lunar bound BFR in LEO, and then top off the rocket when it is in the correct transfer orbit. That at least is how I understood it. I suspect it will take about as many missions to refuel the BFR in the elliptical orbit as it will take to refuel it in LEO, although there will be less fuel per load, the rest is lost to match the orbit of the payload rocket.

As for Mars, the Delta V required to get to Mars is about 4.3 km/s. I'm not sure what it takes to land the BFR on Mars, but it seems perfectly reasonable that a fully loaded BFR can take 150 tons to Mars, from LEO.

Of course everything about planned SpaceX Starship configurations and missions is still tentative and subject to change. However, there are a few points worth establishing:

I don't have figures for the new designs, but the basic capabilities of the BFS are described on wikipedia. The dry mass of the BFS is 85 tons. The propellant mass for a full load is 1100 tons and the payload to LEO of the BFR is quoted on that page as 100 tons plus. I think I've heard 140 elsewhere, but I don't recall where and that might just be for the tanker variant.

So you can deliver your BFS to LEO with 100 tons of whatever you want on board. That could be unused fuel (in which case you could use the tanker variant, which is a bit lighter in itself (no life support, windows, ...) so can carry more) but it's more likely to be your mission payload. So you probably arrive in LEO With no fuel. Each refuelling flight to LEO carries 100 to 150 tons of propellant, so it takes somewhere between seven and eleven of them to fill your tanks completely.

The presentation shows a fully refuelled (although this isn't clear, it might be as refuelled as it can get in 5 flights) BFS to have a delta-V of between about 6 and 9 km/s depending on payload. A moon surface and return mission is about 9 km/s, a Mars surface mission (planning to refuel there before return) is about 4.8 km/s (more if you want to shorten the transfer). So fully refuelling in LEO is enough to get you to Mars, but not enough to get any useful payload to the Moon and back.

To manage the lunar mission, the concept is to add a couple of refuelling transfers in a high elliptical Earth orbit (GTO or even a bit higher). This will deliver less fuel per tanker launch (since more of it will be burned getting there) but reduces the delta-V from last refuelling to end of mission by about 2.5 km/s.

Not the answer you're looking for? Browse other questions tagged spacex the-moon refueling or ask your own question.

25
Delta-V chart mathematics
13
How unreachable are Jupiter's moons from Mars with the technology developed for going to Mars?
9
Falcon 9 maximum point-to-point landing range
10
Range of BFR as single stage
8
Capacity of the BFR tanker -- how many flights to fully refuel the spaceship?
7
Can BFS land on the Moon?
3
Payload to LEO of the BFR 2017 compared to the 2016 version
3
How could Starship "deep space variants" improve payload performance by "orders of magnitude" (Elon Musk)?
2
Why spray LOx into combustion chamber, if GOx is more effective?
-1
Trying to calculate Starship's ability to escape earth gravitational potential
See more linked questions

26
Can a satellite orbit Earth so that it always has the Moon in line of sight?
26
Is it possible to have an orbit around the earth and the moon
10
Is BFR refilling in space purely milli-g "gravity" feed rather than using pumps and/or pressure?
45
Which is closer to Mars, Earth or the Moon?
2
Can we expect shots from Starman that include the Earth and Moon together?
3
Is ISS ever visible at all on the earth, unaided, by full moon moonlight alone?
14
Will it be possible to see BFR approaching the moon from earth, with naked eye?
2
How does SpaceX transmit the video feed from the first and second stage cameras back to Earth?
27
Would Earth fireworks work on the Moon or on Mars?