How do reduced gravity aircraft work?

I know the trajectory the parabolic flight takes, just not how it works. I believe it works because the floor is literally falling below you. I have heard that astronauts have been trained in water, is there like a plane that is filled with water that we can't see or what?

The "Vomit Comet" and similar zero gravity aircraft, as you say, fly a parabolic trajectory. Here's a description from Wikipedia.

Initially, the aircraft climbs with a pitch angle of 45 degrees using engine thrust and elevator controls. The sensation of weightlessness is achieved by reducing thrust and lowering the nose to maintain a neutral, or "zero lift", configuration such that the aircraft follows a ballistic trajectory, with engine thrust exactly compensating for drag. Weightlessness begins while ascending and lasts all the way "up-and-over the hump", until the craft reaches a downward pitch angle of around 30 degrees. At this point, the craft is pointing downward at high speed and must begin to pull back into the nose-up attitude to repeat the maneuver. The forces are then roughly twice that of gravity on the way down, at the bottom, and up again. This lasts all the way until the aircraft is again halfway up its upward trajectory, and the pilot again reduces the thrust and lowers the nose. 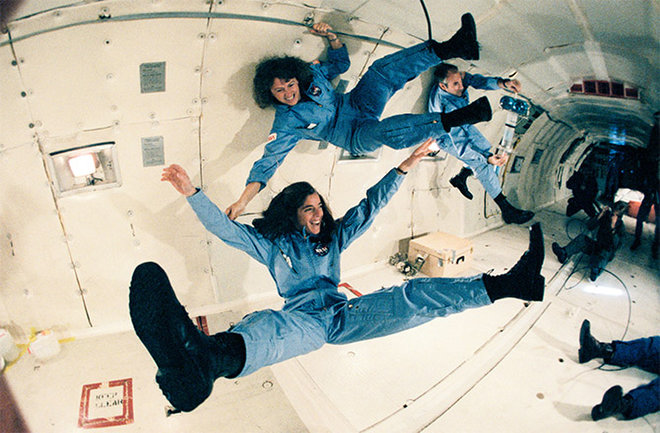 As far as the water goes, you have probably heard of the Neutral Buoyancy Lab or similar facility, where astronauts practice spacewalk tasks while immersed in water to give them a simulated free-fall environment. It is unrelated to the aircraft except that it is a different means of simulating free-fall. 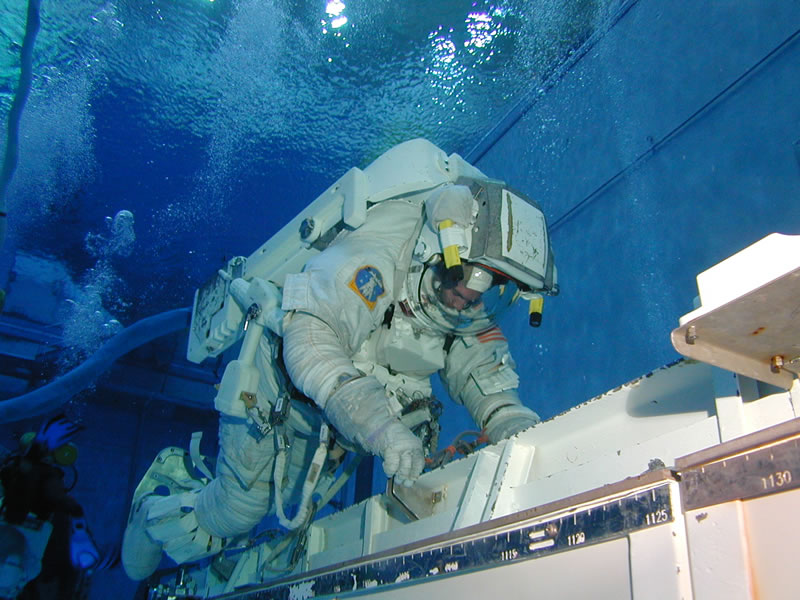 Neither is a fully satisfactory free-fall simulation but no one has yet come up with a better one.

Drawbacks of the water facility: crewmembers are not really in free-fall at all. Their suit, tools and other items that they manipulate are specially made or modified to be neutrally buoyant but the internal suit environment is a normal 1-g field. Extra drag while moving through the water compared to vacuum.

Imagine that you are falling. You would perceive gravity exactly the same way as you would if there were none. (This is one of the reasons that the sensation, even in space, is known as free-fall) Now imagine that as you fall, there is an airplane around you, matching your fall exactly. This is how planes such as the 'vomit comet' work. The role of the airplane is to get you high enough, to block the wind as you fall, and to catch you at the bottom.

Edit: As Organic Marble points out, it does start while you (with the plane) are going up, so perhaps being thrown through the air with a plane around you is more accurate, but the concept is the same in either case.

Not the answer you're looking for? Browse other questions tagged microgravity training or ask your own question.

5
Does NASA no longer own a "Vomit Comet?"

13
Are all crew on board a spacecraft trained to handle flight-systems?
17
How well would a broken bone heal in zero gravity?
13
Would human "superpowers" in low gravity fade away through reduced muscle mass?
12
How would a zero gravity cat litter box work?
6
How do we create a zero gravity environment on earth?
14
How many seconds of near-zero gravity are practical with a Reduced Gravity Aircraft?
7
How might artificial gravity experiments be conducted to determine adaptation in mice?
6
Could an aircraft ever simulate Martian gravity perpendicular to the aircraft's floor?
15
How is lower/no gravity simulated on a planet with gravity, without leaving the surface?
21
Why is dust such a problem in microgravity? Wouldn't proper air circulation and filtration take care of it?