Unless I've made some kind of error, the TLE's have stopped at TLE epoch 17162.83 which is 11-Jun-2017. I was doing a quick search for this answer comparing the orbits of IBEX and Spektr-R.

I noticed while writing this answer that while I can easily find Spektr-R's orbit in JPL Horizons, I can't find IBEX in Horizons under any of its aliases (IBEX, Explorer 91, SMEX-10).

Wikipedia lists IBEX's web site as https://www.spaceops.swri.org/ but that page is no help. I found this page: http://ibex.swri.org/archive/index.shtml but the last update is in 2014.

I'd like to see IBEX's orbital data, but with no TLEs since June and no Horizons, it's "gone dark" in terms of publicly accessible data.

Is it on a secret mission? 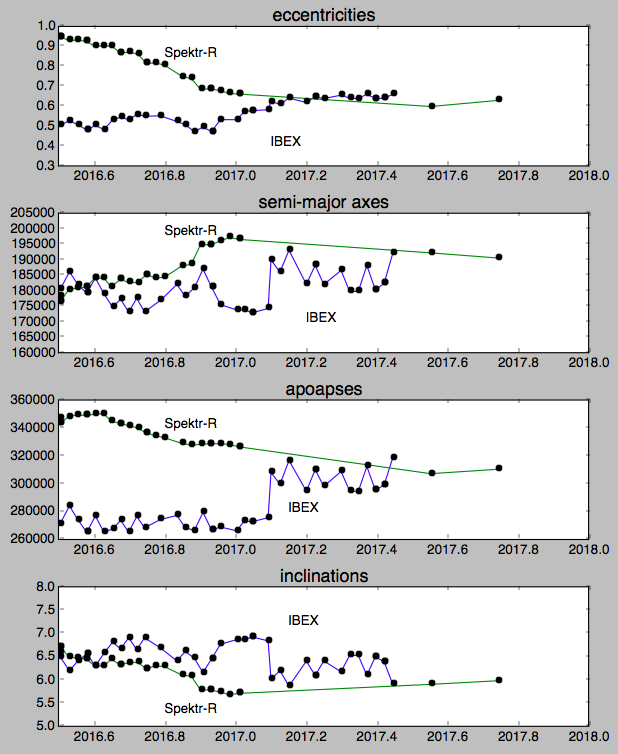 below: Historical Orbital parameters from TLEs for IBEX (33401) and Spektr-R (37755) since orbits were established for each. From this answer. 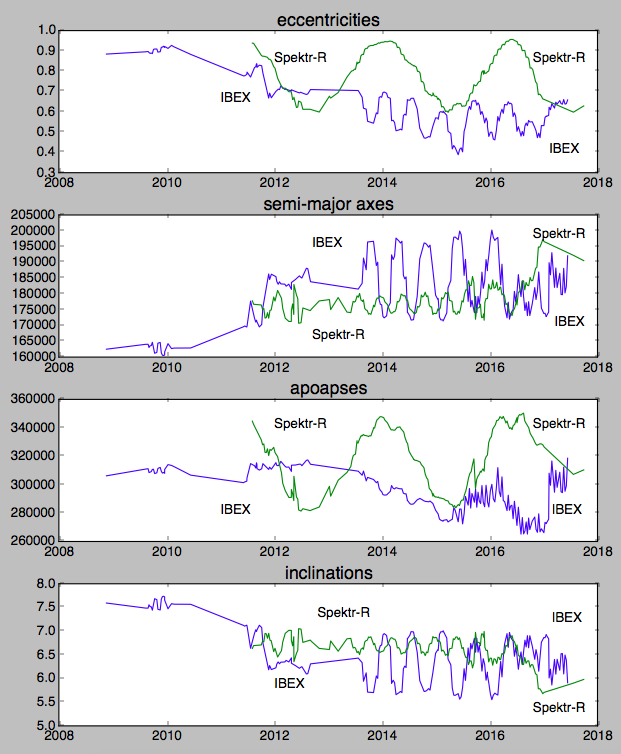 IBEX is a small satellite, with less than 1 square meter of area visible. In addition it is very far out, at the closest point is is 59,000 km or so away from Earth. Space Track has stated that they can track an object at Geosynchronous orbit that is about the side of IBEX. It seems that it can only be tracked when it is at it's closest, and there are definitely some holes in that tracking even at the closest approaches.

That being said, it is unusual to have no TLE updates for such a long time. From the very data you showed, however, this isn't the first time that such a long gap has occurred. It happened between 2012-2013.

If I had to speculate, I would guess that JSPOC isn't tracking these objects are carefully for some reason, which could be that the closest approach is happening over the Pacific ocean or some other very remote location, and it isn't able to be tracked when it is at that closest time period.

NASA not releasing status of a spacecraft that has been dead for 4 months would be unprecedented, and I don't see any reason why they would hold back. The mission is well beyond it's planned lifetime. In fact, IBEX has released data as recently as 2019, so while there seems to be some difficulty tracking it from JSPOC, it is there and operating.

I looked for a TLE in Celestrak and the message is interesting.

The status is given as + and that means "operational", and yet for the latest TLE it says LOST!

Using this guide I get:

Averaging apoapsis and periapsis I get a semimajor axis of 188241.5 km. However putting that into

yields a period of about 13547 minutes or 9.407 days, which probably shows how strongly the orbit is perturbed by gravity from the Sun and Moon so far away from the Earth.

Not the answer you're looking for? Browse other questions tagged artificial-satellite two-line-elements jpl-horizons ibex or ask your own question.

8
What is the highest non-equatorial earth orbit used?

15
How big of a problem is the Lunar eclipse in April 2014 for LADEE?
10
Where to look for historical or reconstructed orbit data for early NASA missions - Mercury-Atlas 6 for example
5
How do SDP4's "Deep space" corrections to SGP4 account for the Sun's and Moon's gravity?
3
Has a TLE ever been issued for a spacecraft trajectory not bound to Earth orbit?
6
How do I determine the ground-track period of a LEO satellite?
9
Is SGP4 propagation necessarily more accurate near the epoch chosen for TLE generation?
6
Is TESS really lost? What does Celestrak mean exactly?
4
What caused the ISS Two Line Element Day of Year problem beginning 12-24-2019?
4
Get dates when a satellite has performed maneuver from historical TLE data (python)?