Table 1 of this document gives Spacecraft Transponder Turnaround Ratios that are supported by the Deep Space Network. These are the PLL controlled divide-by ratios that a spacecraft uses when receiving a carrier frequency from the DSN and retransmitting a different frequency back to Earth which is still phase-coherent, for the purposes of precise doppler shift measurements as part of a determination of a (usually deep space) spacecraft's trajectory. Read more about this in this question.

Some of the supported ratios are within-band and close to unity; X to X-band, Ka to Ka-band and S to S-band. This means that the spacecraft must simultaneously receive a very weak signal and transmit a very strong signal at frequencies that are very close, and this requires more frequency rejection in the spacecraft's receive circuit.

Question: Are there any deep-space spacecraft which actually support within-band turn-around for Earth-based doppler measurements? Are these spacecraft using one dish for simultaneous receive and transmit within the same band? 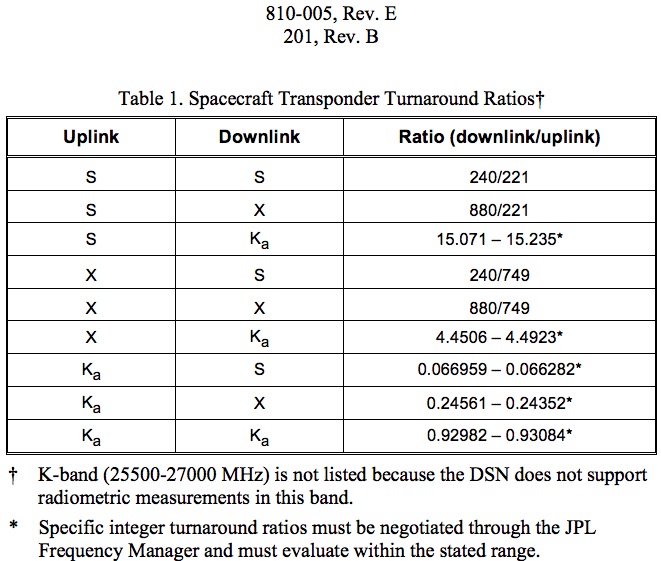 Yes, and yes. The standard Doppler data type on deep-space spacecraft is X-band to X-band, and transmit and receive are on the same antenna. Most deep-space spacecraft only have X-band transceivers. A few have more than one band, usually for either radio science reasons and/or higher data rate on Ka (accepting some added risk of weather interference). S-band is passé.

Not the answer you're looking for? Browse other questions tagged spacecraft doppler-ranging delay-doppler or ask your own question.

5
How does a three-way doppler shift measurement work?
6
Relativistic effects in space mission communications
1
Does the Juno spacecraft have an “open signal, by design”?

9
Why was the 100m Green Bank dish needed together with DSN's 70m Goldstone dish to detect Chandrayaan-1 in lunar orbit?
3
How have/how will Indian ground stations be used for comms or tracking of deep space spacecraft?
5
How does a three-way doppler shift measurement work?
2
How will InSight's RISE antennas end up pointed in the right direction?
0
What are monostatic radar observations, and how will Deep Space Network's DSS-13 be used to observe asteroid 1999 WK4's flyby of Earth?
2
How exactly does TDRSS provide tracking? (Tracking and Data Relay Satellite System)