Would it have been any more difficult to build the space station without the space shuttle?

I know that the Space Shuttle delivered a lot of modules and supplies to the International Space Station, but I also know that other rockets were just as capable of performing the task at that time during construction.

Would it have been more feasible or less feasible to build the station without the Space Shuttle? Was it really that critical to the construction of the space station to have the Shuttle perform deliveries as opposed to other, perhaps less costly rockets? Or was it the only American technology available (with contractual funding) at the time to do it? Was there anything particularly unique to the Space Shuttle that made it crucial to the construction of the ISS?

I do not think your assertion that "other rockets were just as capable of performing the task at that time" is correct at all. I'd love to hear your counterexamples, if you have any. Perhaps you are referring simply to their payload-to-LEO capability? If so, that is only the tip of the iceberg.

No other vehicle at the time provided all the elements of EVA capability, 50klb payloads, and a manipulator arm to carry out the assembly tasks. This image from STS-88 (the first assembly flight) shows all of those elements in play. 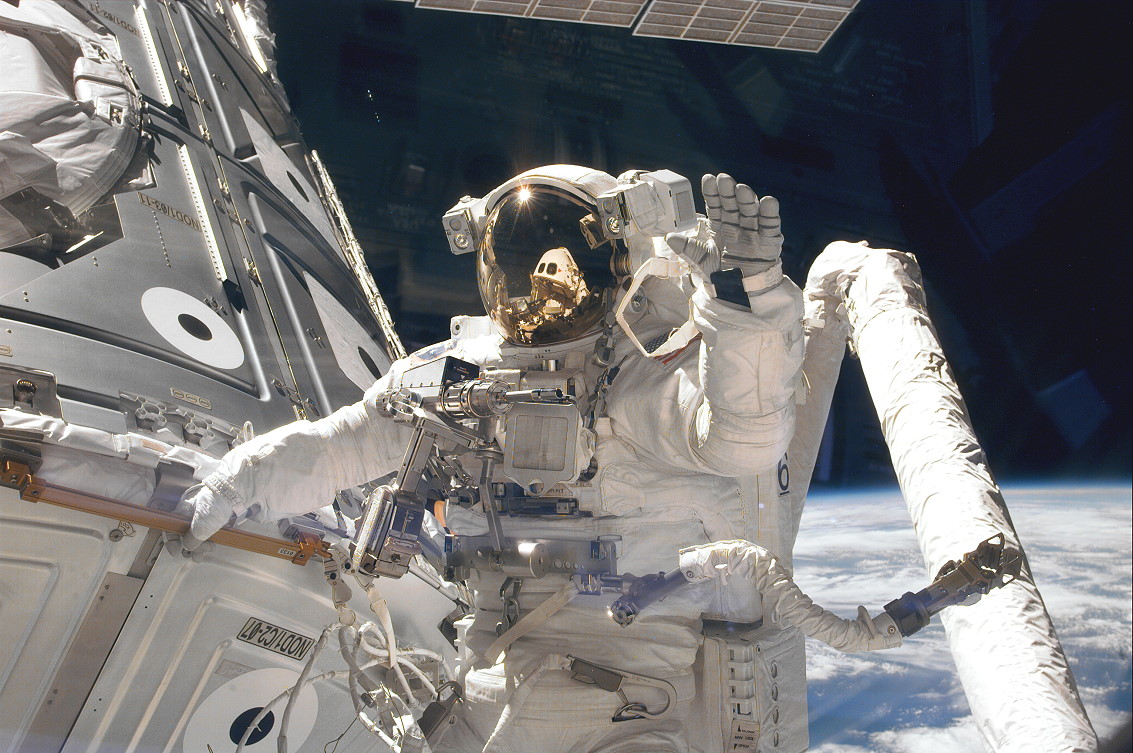 Of course, the ISS (US side) was designed to be assembled by the shuttle. If you started with a clean sheet design, it is certainly possible to come up with a configuration that could be built by other vehicles. But that is a purely hypothetical exercise.

Launching and assembling the ISS in its current design could not have been accomplished without the STS (Shuttle system), but that is largely because the ISS was designed with the STS in mind as its launch vehicle. The ISS could be designed to be assembled in orbit using a large number of spacewalks because designers knew they would have the shuttle available to host EVAs. While the STS boasts a payload capacity to LEO of 27,500 kg, the largest ISS components it delivered were all under 16,000 kg. The largest ISS components at 19,000 to 20,000kg were delivered by Russian Proton rockets.

Wikipedia has an excellent article on the Assembly of the International Space Station which describes module sizes, delivery methods, and the number of components and related spacewalks.

However a space station of a different design could have been launched and assembled by different rocket families. In fact, two other space stations were.

Skylab was launched in 1973 on a modified Saturn V booster. Skylab weighed in at 77,000 kg, four times the weight of the largest ISS modules, and had an internal volume of 12,417 cubic feet, slightly more than 1/3 of the ISS' current volume. So in the broadest terms, a space station with similar stats to the ISS could have been launched and assembled using three Skylab-class modules. Skylab's crew, launched separately in an Apollo module, transferred to Skylab and then used it to host EVAs, most notably to repair the lab, as it was damaged seriously during launch. In 1986 the Soviet Union used a Proton heavy-lift rocket to launch the first component of their space station "Mir." Mir would eventually be composed of seven pressurized and several unpressurized modules with a total pressurized volume of 350 m^3 (12,360 cu ft). Although eventually decommissioned as Russia joined the US as an international partner on the ISS, Mir was a very capable space station and was assembled in orbit and crewed using Soyuz capsules without the Shuttle-like capabilities of the Canadarm and extensive EVA support.

In summary, the ISS components could have been (and frequently were) launched on non-STS rockets, but assembly in its current design required the support of the Shuttle. Other, earlier space stations were launched by other systems and assembled by different methods. Given the lessons of Skylab and Mir, it stands to reason that a space station with capabilities similar to those of the ISS could have been built, launched, and assembled without the STS. "Easier" is difficult to quantify. If we had stuck with the Saturn V-based launcher and Skylab-class modules, we would have faced far fewer assembly EVAs but with much larger, more massive modules. In lieu of the Shuttle's arm and EVA support we would have had to develop and qualify a docking system that allowed an 85-ton module to rendezvous and dock with another 85-ton module as "easily" as a 32-ton Apollo CSM docked with its LEM.

Not the answer you're looking for? Browse other questions tagged iss space-shuttle mission-design or ask your own question.

39
Why didn't the Space Shuttle have a launch escape system?
30
Have any animals that have been studied onboard the ISS come back alive?
6
Why did the design for Space Shuttle docking change?
9
Building space stations with the original, smaller shuttle
11
How close was the U.S. DoD to getting their own space shuttle?
42
Was the payload bay of the Space Shuttle depressurized before launch?
12
How was the Space Shuttle Orbiter used for ISS Reboost?
5
Why would the Shuttle-Transtage have been unusable for science missions?
2
Would the space shuttle do a yaw maneuver to avoid the tower?