What exactly is the interaction that blocked Juno's data downlink near solar conjunction?

According to Space.com's article Juno Phones Home: Jupiter Probe Reconnects with Earth After 8th Flyby, Juno's recent close flyby of Jupiter and data collection happened while Jupiter was too close to the Sun as seen from Earth for the data to be reliably received by the Deep Space Network.

Here is a GIF made from some SOHO LASCO C3 images; you can see Jupiter disappear behind the central occultation disk that protects each SOHO imager from the Sun. (Incidentally, that's Comet 96P on the right; see the NASA Goddard feature Return of the Comet: 96P Spotted by ESA, NASA Satellites.)

Solar conjunctions of Jupiter — when Earth's and Jupiter's orbits take the planets on opposite sides of the sun — mean that a spacecraft orbiting Jupiter can't transmit to Earth without the charged particles the sun emits corrupting the probe's signal. The last solar conjunction of Jupiter was in August 2015, before Juno had arrived at Jupiter, and the next will be in November 2018, according to in-the-sky.org.

Of course the article is wrong, and the previous conjunction would have been in 2016.

I've plotted the angles below; it looks like about 1.5 degrees is too close, but 4 degrees is OK. Those correspond to a closest approach of the line-of sight to the surface of the Sun of 3 vs 10 million kilometers.

Question: Is this a simple plasma density effect? When the line-of-sight passes too close to the Sun the cut-off frequency drops below that used by the spacectraft for downlink? Is the density of the solar wind at this distance quantitatively high enough to become opaque at this frequency? Or is the problem more complicated, and perhaps also involves too much dispersion? Or perhaps a geometrical problem; it's too hard to point so close to the Sun without equipment damage, or even a radio interference problem; there is too much spillover of radio noise from the Sun and the weak spacecraft signal can not be separated well enough to allow for a high-bandwidth downlink?

note: I'm looking for some level of explanation, and not just an answer that says "Because of interference from the Sun." Thanks!

Plot of calculated positions and separation using the python package Skyfield. I'm not sure of the exact time of the beginning of successful downlink, so I've just added seven days to the time of flyby (estimated from JPL's Horizons.)

Tiny dots are spaced at 1 day intervals, medium-sized red dot on the left is the moment of flyby, large-sized green dot near the right is roughly the time of successful downlink. 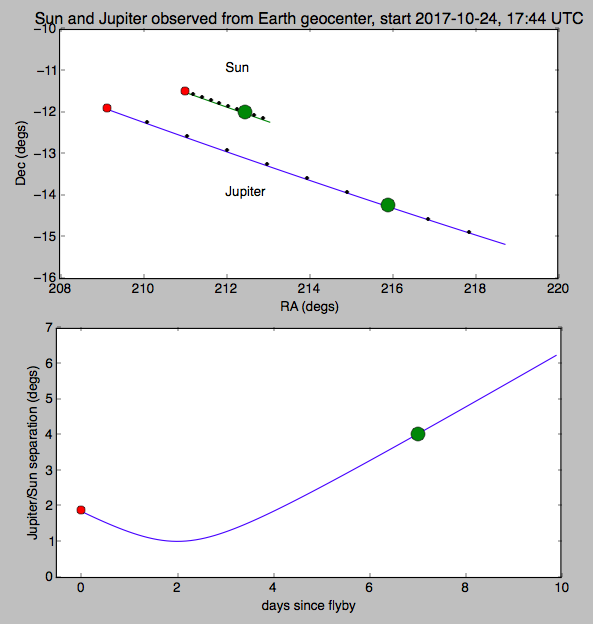 This article claims that it's the charged particles emitted by the sun that actually block communication with Juno. https://www.space.com/38668-juno-8th-jupiter-science-flyby-success.html This article about Mars conjunction cites the same physics and points out more succinctly that it's the command uplink that operators are worried about corrupting. https://www.jpl.nasa.gov/news/news.php?feature=7485

From talking to the payload operations folks at Malin Space Science Systems where I work, I can tell you that many of the missions they support including Juno and the Mars rovers, will attempt to downlink data during times apart from the very middle of conjunction, and that will result in varying degrees of data corruption requiring packet retransmission once commanding is re-established. So I would argue that the real issue is that the uplink packet loss rate becomes too high and it's too much trouble to retransmit so much of the uplink commands once the RF noise floor goes too high for the spacecraft receiver.

Not the answer you're looking for? Browse other questions tagged jupiter juno deep-space-network data-transmission skyfield or ask your own question.

27
Why no recent information about or photos of Ultima Thule?
25
How well can Voyager 1 separate Earth signals from Solar noise these days?
11
Why doesn't thermal radio emission from a DSN "hot dish" completely swamp the benefits of a cold LNA?
5
Would adding satellites between Earth and Mars improve communications latency?
5
When scientific and engineering data are sent from space probes, are the signals repeated to minimize transmission error?
4
How can I calculate if a satellite is currently in sunlight or eclipse using pyEphem or Skyfield (preferred)?
6
Why put DSCOVR in a Lissajous orbit? Wouldn't a halo orbit completely avoid the Sun exclusion zone?
7
Will there be a command moratorium for Mars spacecraft again in 2021?
3
Earth-Mars Radio Blackout: Is it possible to define an extended solar radius to solve this as a geometric problem?
2
Parker Solar Probe orbital velocity
See more linked questions

16
Resilience to data transmission errors of the Juno spacecraft
4
Will there be joint observations from earth and the Juno spacecraft when it reaches Jupiter?
9
Why was Kepler's orbit chosen to continue to drift away from Earth?
4
JPL Horizons original reference orbit data for Juno - how to retrieve now that it's been updated?
5
Juno's original orbit around Jupiter - is this apsidal precession? If so, need expression
5
How does not orbiting Europa maximize Clippers coverage of Europa for a given radiation dose?
9
Why did Pioneer 11 use a gravitational assist to swing above the ecliptic plane... twice?