Lets say I want to create a satellite constellation similar to earth's GPS network around the moon or mars with around 24 4U-6U cubesats as shown in this image:

I was wondering is it possible/practical to launch these small cubesats into their appropriate orbital inclination from an equatorial orbit using some sort of magnetic coil gun or "Gauss cannon".

So as a step by step this would look like this:

I see several advantages to this system such as:

I've run the math! Although it's possible, the instantaneous energy required to do this is just insane. Basically you'd need the power supply of a Nimitz-class Aircraft Carrier to power the thing or a huge bank of capacitors. An orbital inclination change like this for a 5kg satellite would require around 16 megajoules of power or the energy equivalency of around 400ml of kerosene. 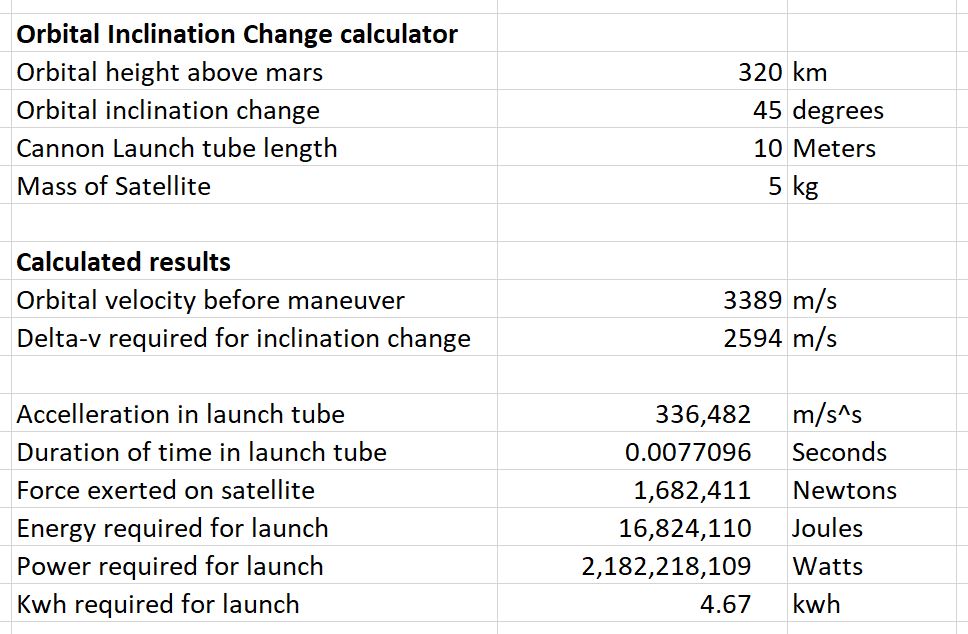 As you can see, the instant power supply capability required is very high and designing a spacecraft which survives an acceleration this extreme would probably become heavier and thus defeat the purpose of the satellites (being light and easy to launch). It's much easier add the extra propulsion systems to position the satellites traditionally.

Not the answer you're looking for? Browse other questions tagged orbital-mechanics artificial-satellite cubesat communication-satellite or ask your own question.

19
Passive attitude stabilization with magnets - are there studies based on actual flight data?
6
Cubesat dispenser operation for fleet deployment
7
With current or near-future Cubesat propulsion technology, largest aphelion achievable?
3
Orbital State Vectors for the Centauri System
0
What is the planned orbital configuration of Astrocast's planned IoT constellation?
1
How will Astrocast's upcoming IoT (Internet of Things) network in space work? What kind of "things" will be networked?
3
Are the cubesats deployed from the ISS always directed "nadir and retrograde"?
2
How will JAXA's space elevator-testing cubesat experiment work?
3
What can be done in future mass-cubesat deploys to make them "less irksome" to orbital space debris experts?
7
Working principle of Earth sensor