Are nuclear-powered engines the way to go for space exploration?

I often think about the future of humanity and how to achieve it. Despite criticism, the USA and USSR achieved significant scientific breakthroughs, such as:

But we have to move on. And one of the ways, of course, is deep space exploration. The main problem seems to be the engine for spacecraft, which could give us the opportunity to reach deep space in acceptable time.

Is nuclear fission the right approach?

The problem with using nuclear fission reactors as means of power to propel spacecraft is twofold: our own aversion to anything nuclear due to environmental hazards and the problem of reaction mass still persisting, regardless of your energy source longevity and power density per its own mass. Let's explain these points a bit more.

The reaction mass problem comes from the fact that there isn't anything to propel against in the vacuum of space, unless you bring along some reaction mass that could be expelled at high velocities and result in thrust, a kinetic momentum transfer of thrust equaling mass flow rate of exhaust by exhaust velocity:

So while your nuclear reactor might be perfectly capable of having great energy density per its mass, you'd still have to have some consumable mass on you that you can energize and increase this mass excitation state to either greatly reduce its density (superheating, chemical reaction, e.t.c.), or otherwise be able to accelerate it in the opposite direction to your vector of travel (e.g. ion thrusters, direct hot nuclear fission products, e.t.c.), and later expel it at you rocket engine's nozzle, resulting in acceleration of your spacecraft in the opposite direction.

Some proposed nuclear powered rockets would thus either carry onboard reaction mass that is a rocket engine consumable, or alternatively use nuclear fuel byproducts as their reaction mass in a bit more direct nuclear propulsion system, like for example the fission-fragment rocket. The latter however achieve theoretically low specific impulse per time, even if they might operate for a long time (high overall specific impulse $I_{sp}$ over its total lifespan). Similar goes for ion thrusters that could also be nuclear powered of course, and indeed their electrical power requirements are usually provided by an onboard RTG (Radioisotope Thermoelectric Generator), although it may also be by solar panels, depending on mission parameters like proximity to the Sun, its duration, and so on.

Another problem with using direct-nuclear power propulsion is designing for these reactors' heat producing characteristics. Direct heat exchange with another mass surrounding the spacecraft simply isn't possible in the vacuum of space with not nearly high enough particle density even in hard vacuum of inner Solar system. So enormous heat radiators would be needed to cool down liquids responsible for cooling down the fission reactor's core and dissipate heat through radiation alone. That would require tremendous mass to be first lifted to outer space, for any spacecraft to use fission-fragment rocket engines (FFRE). 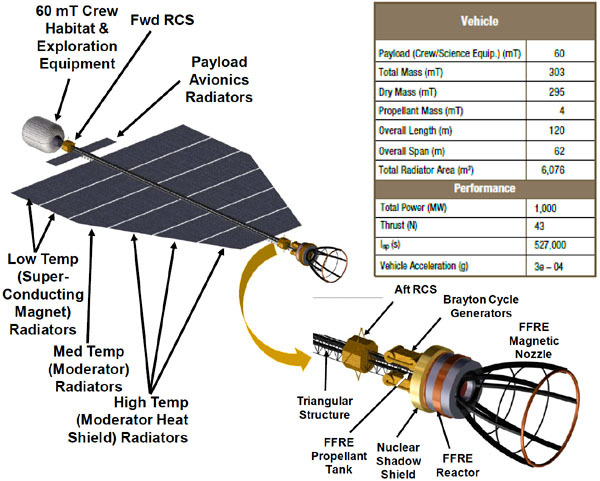 Power density of nuclear power generators is thus, as explained, not really the only factor in the rocket propulsion equation, and the simplicity of chemical reaction powered rocket stages using highly reactive component propellants is still by far the prefered method of achieving thrust. Since this problem of reaction mass either persists and you still have to carry it with you, or the resulting specific impulse of direct-nuclear engines isn't high enough for most space exploration applications, and nuclear generators come with their own non-negligible mass, the chemical rocket is still prefered, especially when used for Earth based rocket launches that come with an additional risks if nuclear powered engines were used instead.

Another factor already mentioned are of course environmental concerns. Several modes of propulsion using nuclear powered engines were already proposed to achieve lift as well, not merely thrust big enough to have in-space application but also achieve lifting capability (thrust big enough per launcher mass to achieve in-atmosphere and in-gravity escape velocity), however they were all much opposed to and never saw the light of day, actually materializing beyond laboratory experiments, theoretical calculations, or perhaps some top secret military experiments. A few of such experiments were done that are know to public, for example the Space Nuclear Propulsion Office (SNPO) project, a joint program of the U.S. Atomic Energy Commission and NASA, called NERVA (Nuclear Engine for Rocket Vehicle Application): 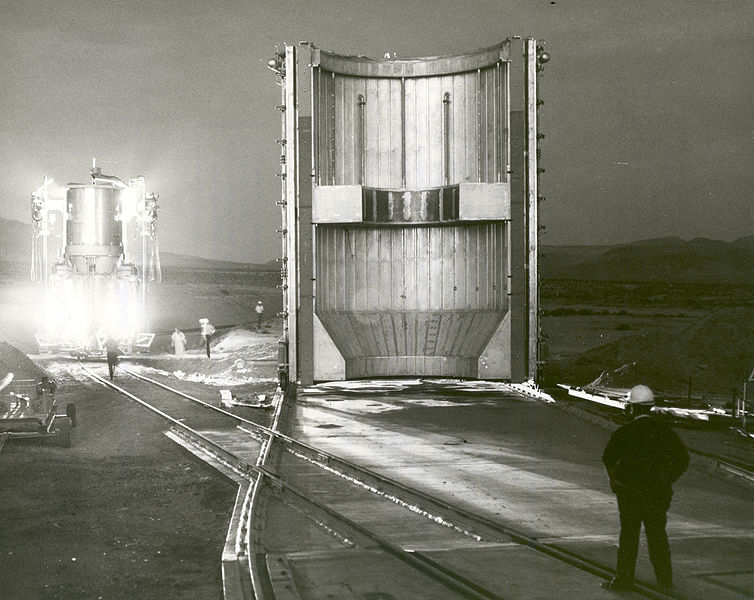 Medium answer: the United States developed nuclear rocket engine technology to the point that by 1969 the only obstacle remaining to full flight status was a near term mission for the rocket engine to apply to. Since spending for deep space exploration began to be cut back by Congress in 1967, and the Nixon administration cut back future NASA manned spaceflight projects to only the Space Shuttle, there was no mission and therefore no need for the nuclear rocket engine program.

The rocket engine technology for reaching orbit is very well understood and very mature. The primary boundaries of that technology today is reducing the costs, of which SpaceX is leading the way. To do so SpaceX uses oxygen + kerosine liquid propellant rocket engines for its Falcon 1, and Falcon 9 two-stage launch vehicles, and for the proposed Falcon Heavy launch vehicle.

Even though that kind of engine is very good at achieving low Earth orbit missions, the middling efficiency of that engine (vacuum ISP 330 seconds) drops the payload down tremendously for deeper space missions. For example even though the 53 ton payload to low orbit of the proposed Falcon Heavy swamps the 27 ton payload of the Delta IV Heavy by more than 95%, the Falcon Heavy drops to only 21 tons to Geosynchronous Transfer Orbit while the Delta IV Heavy drops to 13 tons (only a 62% advantage). That is because the upper stage of the Delta IV uses a oxygen + hydrogen liquid rocket engine of almost the highest possible efficiency for a chemical rocket, an ISP of 465 seconds.

To send manned spacecraft to the moon and beyond and have them return to Earth using only chemical rocket engines requires rockets of titanic size even to send very small spacecraft. In fact it is so difficult to use chemical rockets that well regarded science/science-fiction writer Arthur C. Clarke thought back in the 1950's that landing on the moon would only happen after the introduction of nuclear rocket engine technology.

See the book "Interplanetary Flight: an introduction to astronautics". It's an old book but still relevant today. I also recommend the book "To the end of the solar system: the story of the nuclear rocket". That book was a real eye opener.

11
Is it true that nuclear rockets cut the journey to Mars in half?
7
Is nuclear fusion a viable means of powering spacecraft?
2
Could chemical energy quicken ion propulsion?

4
Nuclear powered engines with LFTR technology?
13
Nuclear Explosion in Space
5
Detecting a Nuclear powered vehicle from outer space (at least 8 AU or further out) feasible?
4
What will be the best way to convert nuclear fusion energy into thrust for a rocket?
8
How similar are nuclear ramjets to nuclear thermal rockets?
6
Are nuclear thermal engine designs limited to about twice the Isp of existing chemical rocket engines? If so, why; what's the limiting factor?
2
Fan powered turbo-pump for low altitude/missile engines