If a space elevator uses both compression and tension design, will we still need new materials?

We build as much of the space elevator under compression as possible and the remaining part using carbon based materials. Is this trick going to work or am I missing something?

The tallest building we can build is only a few kilometers high. Just like a space elevator is limited by tensile strength, a building is limited by the compressive strength of its materials.

A few km isn't going to make the space elevator (which needs to be 36,000 km long, plus another longer section for the counterweight) any easier to build.

The original concept of a space elevator, a Tsiolkovsky tower, was a compressive structure that would just reach just to geosynchronous altitude. Unfortunately, there is no material that can come anywhere close to reaching that high. Structures over a few kilometers high undergo compressive yield -- they collapse in on themselves. (This is, for example, why Mount Everest is about as high as a mountain can be on Earth.)

The modern concept of a space elevator has a counterweight well beyond geosynchronous altitude, making the elevator under tension throughout its length. The tensile strength required is almost within reach of known materials, and should be attainable using materials that are not in the realm of science fantasy. Something much less exotic than unobtainium will do the trick.

I don't think this is quite what you are asking for, but in the broadest sense, a space fountain is a compression structure. These are towers held aloft by a constant upward matter stream shooting up from the base and being deflected by the structure. The upward force on the structure from the deflection is what holds it up instead of the compression strength of the material. These are far more complicated engineering feats then standard tension elevators, but as far as I am aware, they don't require any new materials, though better superconductors would make things easier. There is no strict limit to how tall these can be, so you could find your compromise between tension and compression. In the next paragraph I will go over why I think you would never build it this way.

If you can build a large enough space fountain to help support an elevator, you could also build a launch loop. Which is basically the same type structure but ending with an electromagnetic launcher right above the atmosphere to fling payloads up to orbital velocity instead of dragging them all the way to GEO. Though personally my favorite design is hanging tension space elevators from an orbital ring in LEO. Then the matter stream is in vacuum the whole time so you don't need to worry about vacuum sheaths. I guess you could also use a series of orbital rings to help take the weight off a geosynchronous tether, but I am not sure that there is much of a point.

Compressive towers would only cut a tiny fraction of the length from a planet's surface to synchronous orbit. They don't help much.

But elevators from smaller bodies are plausible.

Ceres with its shallow gravity well and high angular velocity is amenable to elevators. A Ceres elevator could be built with Zylon.

An elevator from Pluto to Charon could be made from Zylon.

Newtons felt by a Pluto-Charon elevator sky rocket as the elevator nears a body surface. See this chart:

So I had an interest in guesstimating how tall compressive towers could be built on these bodies. So I whomped up a Compressive Tower spreadsheet. Screen capture of the sheet with input cells containing the numbers for earth: 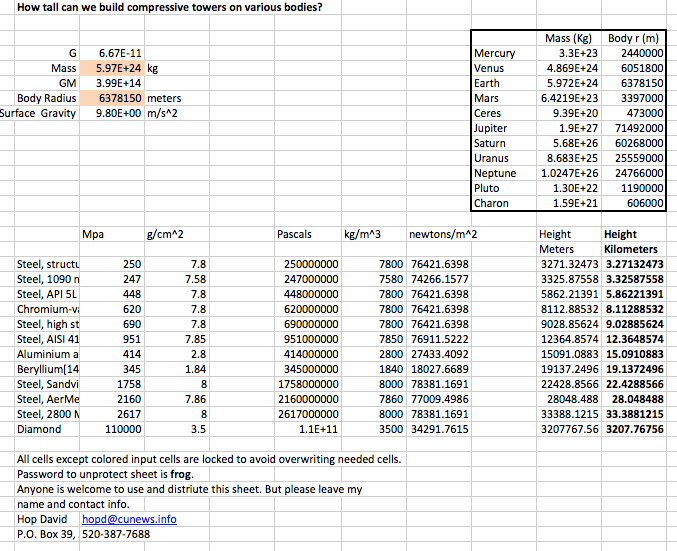 On compressive strength I read from a Wikipedia article:

Even the above I am skeptical of. A 28 kilometer steel tower would push in the crust of the earth, I believe. And even that implausibly high tower is a tiny fraction of the 36,000 km altitude GSO.

But now let's look at a compressive tower for Pluto: 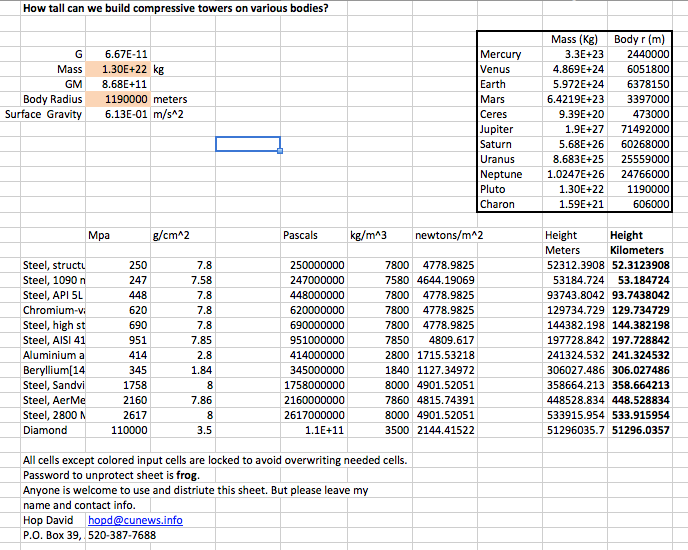 Would a 533 kilometer tower push in Pluto's crust? To be honest I don't know how much weight Pluto's crust can take without being deformed.

If Pluto's crust could support a 533 kilometer tower then that would take a chunk of weight off of the elevator.

It should be noted this spreadsheet assumes constant gravity. But at altitude of 533 kilometers, a kilogram would weigh less than half of what it would on Pluto's surface. So in this regard the spreadsheet errs on the side of caution.