T-3 days: Our 45 Operations Group is ready to take on this Epic Launch from the Eastern Range! @AFSpace @AFSpaceCC 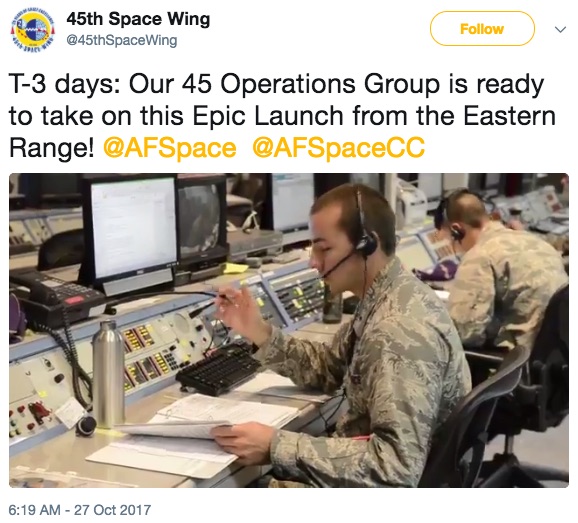 "drive to 48" refers to the 45th Space Wing's goal of being able to support 48 launches per year from Cape Canaveral.

From the "2017 Priorities and Commitments strategic plan" (a document that outlines how the 45th Space Wing will respond to the changes in the launcher market):

Just two years ago, we anticipated Cape Canaveral Air Force Station (CCAFS) and neighboring Kennedy Space Center (which relies heavily upon us for range support) to be running at its full launch capacity in the near future, and began the process to transform the Eastern Range from its original design as a government-led space program to a new design to accommodate and support the needs of new commercial space carriers as well. And today, as a result of our commitment to our 2015 plan, we are positioning the Eastern Range and the services we provide to accommodate up to forty-eight launch operations a year.

Not the answer you're looking for? Browse other questions tagged launch cape-canaveral or ask your own question.

3
"Are we there yet?" (45th Space Wing's goal of being able to support 48 launches per year from Cape Canaveral)

6
What is the highest inclination orbit ever attained from a Cape Canaveral launch?
15
What does it mean for a launcher to be 'nuclear-certified'?
28
What does 'Switch SCE to AUX' mean?
11
How far south can one see a rocket launch from Cape Canaveral, Florida?
16
Was SpaceX's launch of Formosat-5 more vertical than normal for any particular reason?
12
Features seen on the Space Shuttle's solid booster; what does "LOADED" mean exactly?
3
"Are we there yet?" (45th Space Wing's goal of being able to support 48 launches per year from Cape Canaveral)
3
What does 'a nudge' mean in the context of rocketry?
5
Just how "unreasonably gigantic" was the exclusion zone for the scrubbed SpaceX's Transporter-2 Mission first attempt?