What caused this bright light from the ground at night seen from the ISS?

The music video on the NASA Johnson YouTube channel The Sound (& Visions) of Silence shows images and video of Earth taken from the ISS by astronauts Sergey Ryazanskiy, Paolo Nespoli, and Commander Randy Bresnik.

Between 01:02 and 01:10 there is shown a photo of a city(?) area with bright sodium street lighting and dimmer white lights, and in the center is a bright lit white area and what looks like light shining straight up.

Any ideas where in the world this is, and if this is a concert, or a brightly lit public area, or what else has produced all of this light? Are these spotlights, or is this somehow reflected moonlight? 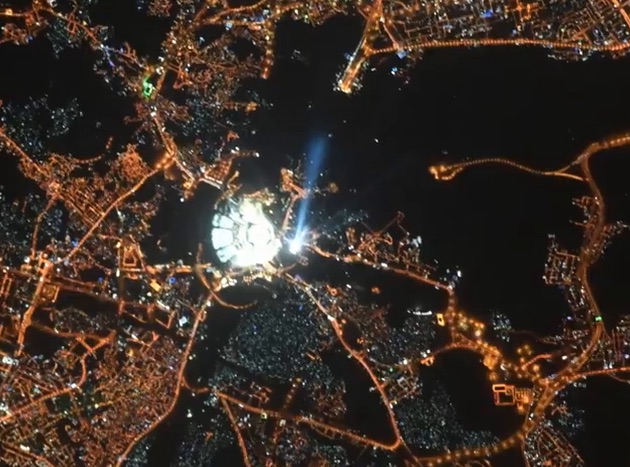 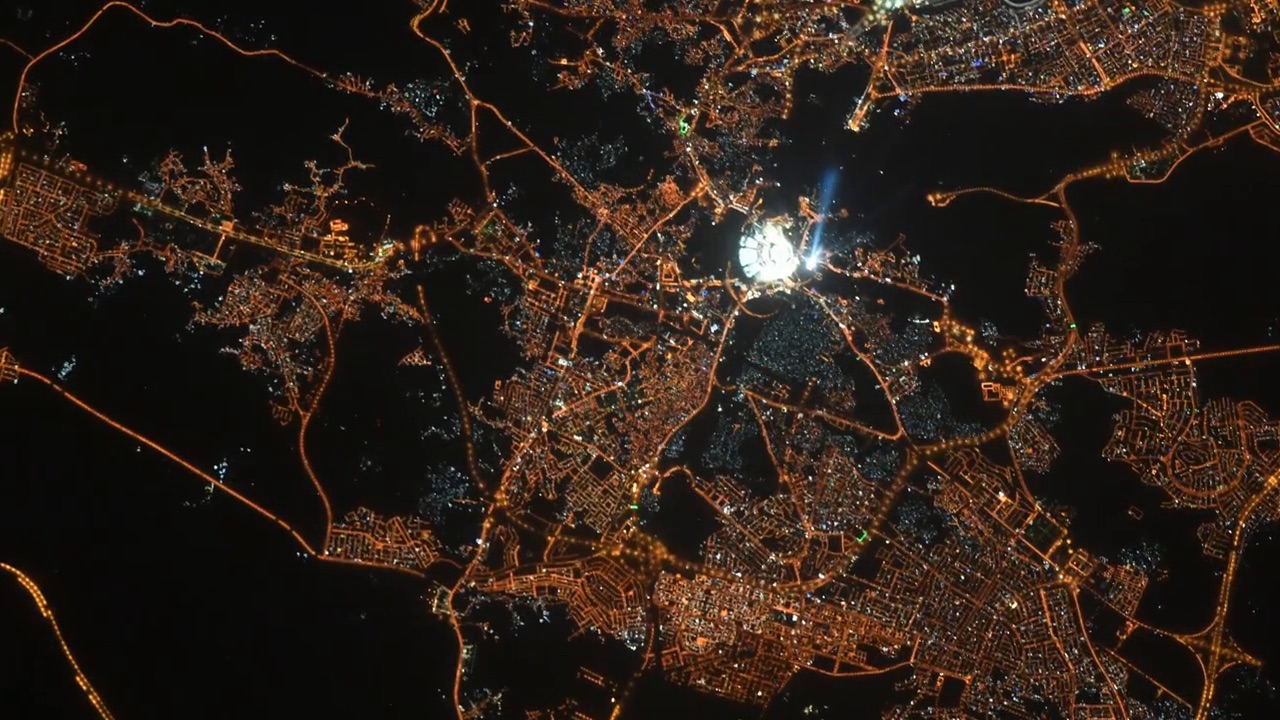 Captured by astronauts Sergey Ryazanskiy, Paolo Nespoli, and Commander Randy Bresnik, the video features stunning footage of Earth and outer space from the International Space Station in low-earth orbit during the months of August through October in 2017.

As an aside, this is a re-recording of the Simon and Garfunkel classic Sound of Silence by the band Disturbed, and their performance of it on Conan received a Grammy nomination. (if you're particularly fond of the original, a caution that this one is very different)

Well I confirmed via Google Maps that this is Mecca. As shown in the map and image below the roads align with those lighted in the image. The dark areas in the first image are steep hills to the East. 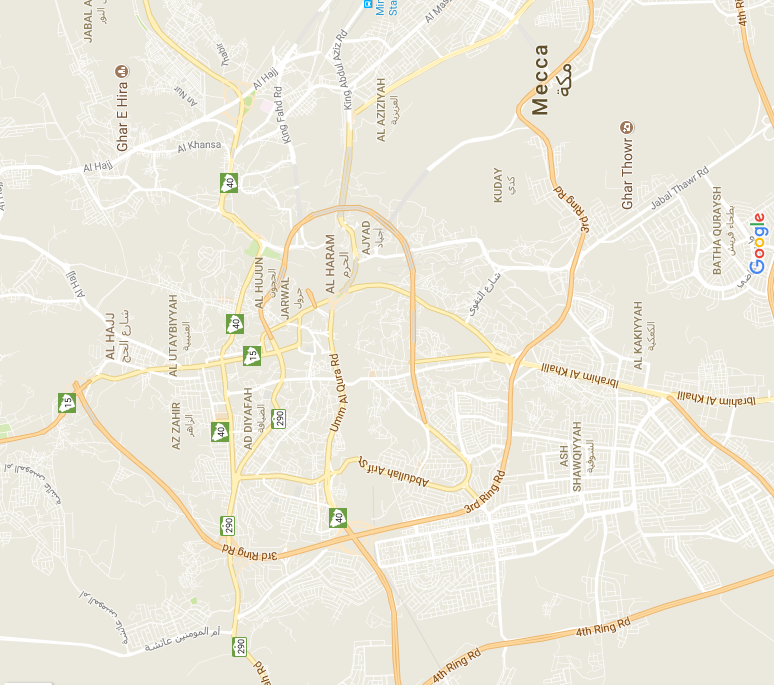 The brightly lit region is the Kaaba and large Masjid al-Haram Mosque, and the bright up light is indeed the Makkah Royal Clock Tower. 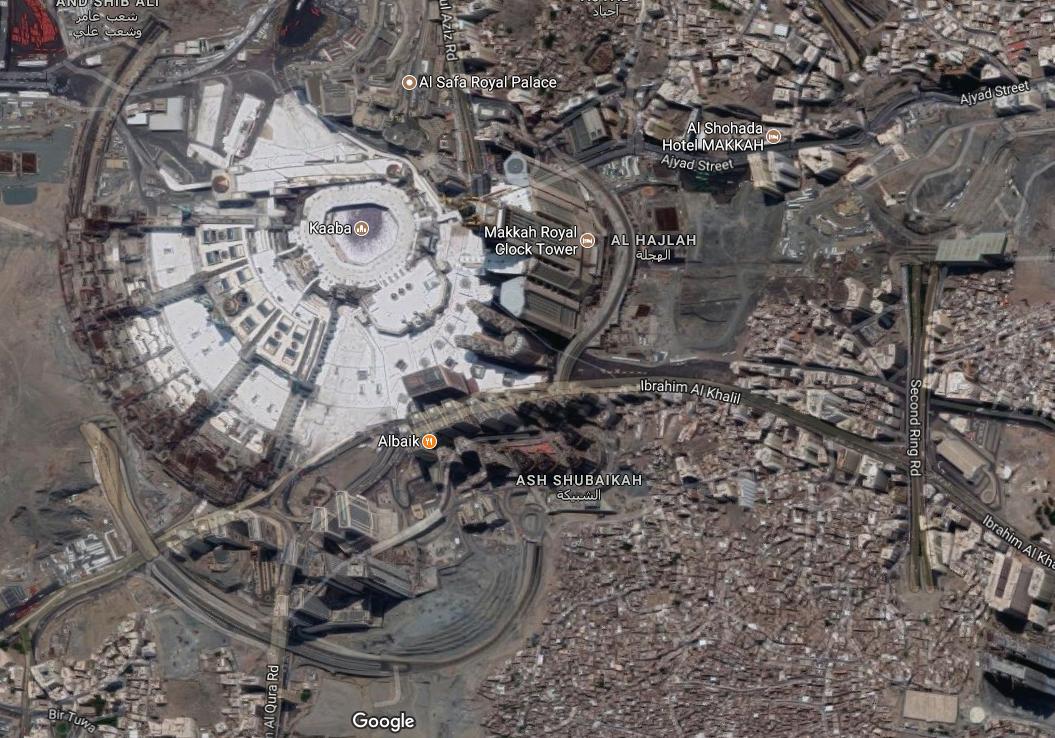 On special occasions such as new year, 16 bands of vertical lights shoot 10 km (6.2 mi) up into the sky.

Not the answer you're looking for? Browse other questions tagged iss low-earth-orbit identify-this-object earth-observation space-art or ask your own question.

11
Are pictures taken from ISS geolocalized?
9
Can ISS astronauts see the lava from the Kilauea volcano at night?
10
What is this huge, red, blinking light structure on Earth seen from the ISS in this video?
8
Can Astronauts really see firework displays from space?
0
Could folks in space see giant projections of art on mountains like this one? Was this one seen or recorded?

11
What is this instrument on the ISS?
3
Expedition 53 group portrait - what's up with the cool shirts?
6
What is this spinning object seen on a spacecraft above the ISS?
5
What area of the Earth can the ISS be seen from?
9
Can ISS astronauts see the lava from the Kilauea volcano at night?
3
What are these bright streaks in MODIS Earth images? Why are they shaped this way?
10
What is this huge, red, blinking light structure on Earth seen from the ISS in this video?
4
What's this mini-cupola-looking object in this photo from the ISS?
8
What is the blue and purple glitter dinosaur above NASA astronaut Robert Behnken in this video?
4
What was this stationary, then moving light point seen at daylight?