What does the four-leafed clover on mission patches produced by SpaceX signify?

According to Spaceflight Now's article Top secret ‘Zuma’ mission puzzles satellite trackers, SpaceX's mission patch for the Zuma Falcon 9 mission is that shown below (and in the article).

I noticed the four-leafed clover at the bottom, then doing a search I've found that this [appears frequently but not always in SpaceX mission patches.

Is there any known or announced significance for it, beyond a general hope for good luck? Why would it appear on some patches and not others? 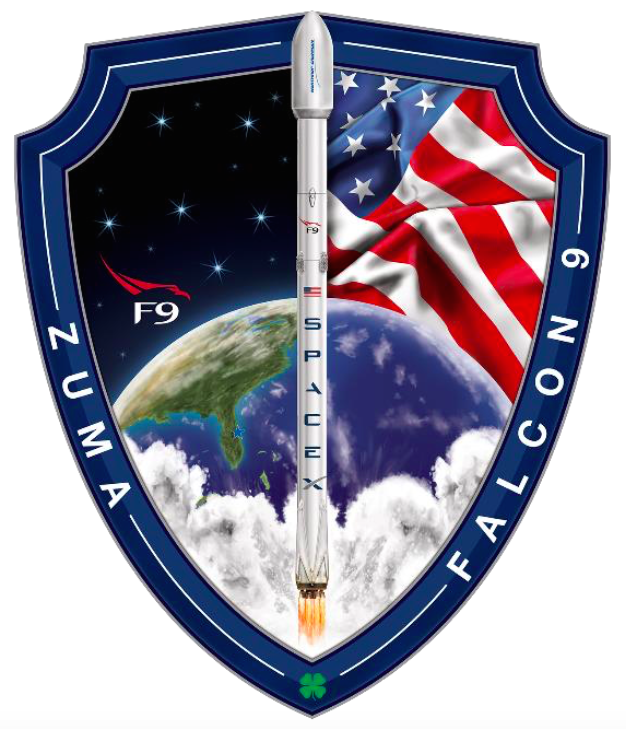 Alas, as far as I can see, no trace of Zuma.

I checked the SpaceX Patch List (by /u/ticklestuff) and found only 4 patches issued by SpaceX without the symbol, they are F1 flights 1-3 and STS-133 Dragoneye (wiki).

So definitely a significant symbol for the company launches.

SpaceX wrote about it on their FB page in a St. Patrick post:

The four leaf clover on SpaceX mission patches began with the fourth flight of Falcon 1, which launched September 28, 2008.

When the flight succeeded, the clover stuck and has been with us ever since.

The four-leaf clover shows in other places too. You can see it on one of the walls of the ASDS Of Course I Still Love You (OCISLY) in this gallery.

Not the answer you're looking for? Browse other questions tagged spacex space-art insignia zuma mission-patch or ask your own question.

1
What do these Formosat-5 patch images mean - who designed them?

7
What do the various logos and text on the Soyuz launcher signify?
3
What is the story behind NICER's mission patch?
6
Did Zuma “bump” NASA?
2
What kind of payload is Mission 1390 (Zuma) going to launch?
0
What happens when a rocket explodes (specifically, the SpaceX CRS-7 mission)?
5
Humanoid silhouette on SpaceX's Starhopper; what does it represent?
1
What exactly is an F-mission?
8
Apollo Mission Insignia patches, were they stitched by hand or numeric control?
2
What mission is this Chris Hadfield photo associated with and what is the location? And what is that thing?