Are these experimental stoichiometric NiTi wire mesh wheels made from "memory alloy"? Need to run at certain temperature?

I just looked at this NASA "specials" page; https://www.nasa.gov/specials/wheels/ and watched the two videos linked below. These experimental wheels use a special stoichiometric Nickel Titanium alloy which sounds (in the video) like it is a shape memory alloy, rather than spring steel.

The alloy metal mesh in these wheels may be useful for a future Mars rover designed to handle either more rugged terrain, or higher speeds, or possibly a heavier vehicle than current rover technology.

But does this require that operation be done in some range of temperatures? Would the wheels need to be heated regularly to recover ("remember") their original shape?

As an aside, is there any possibility this technology would be used on the Mars 2020 rover or is that design fairly well fixed now?

below: Credit: NASA, from here 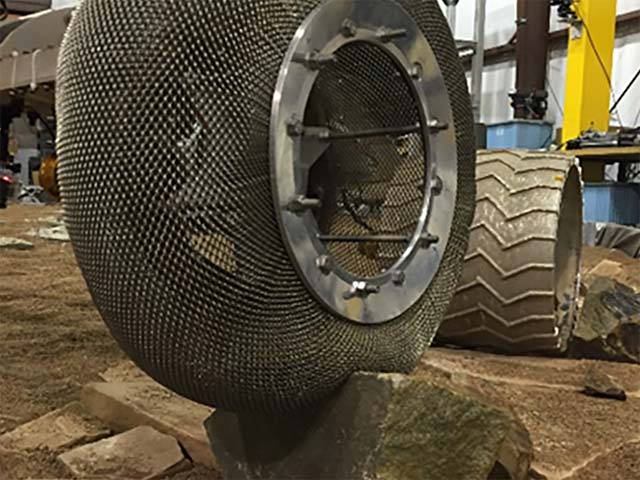 below: Credit: NASA, from Engaget. 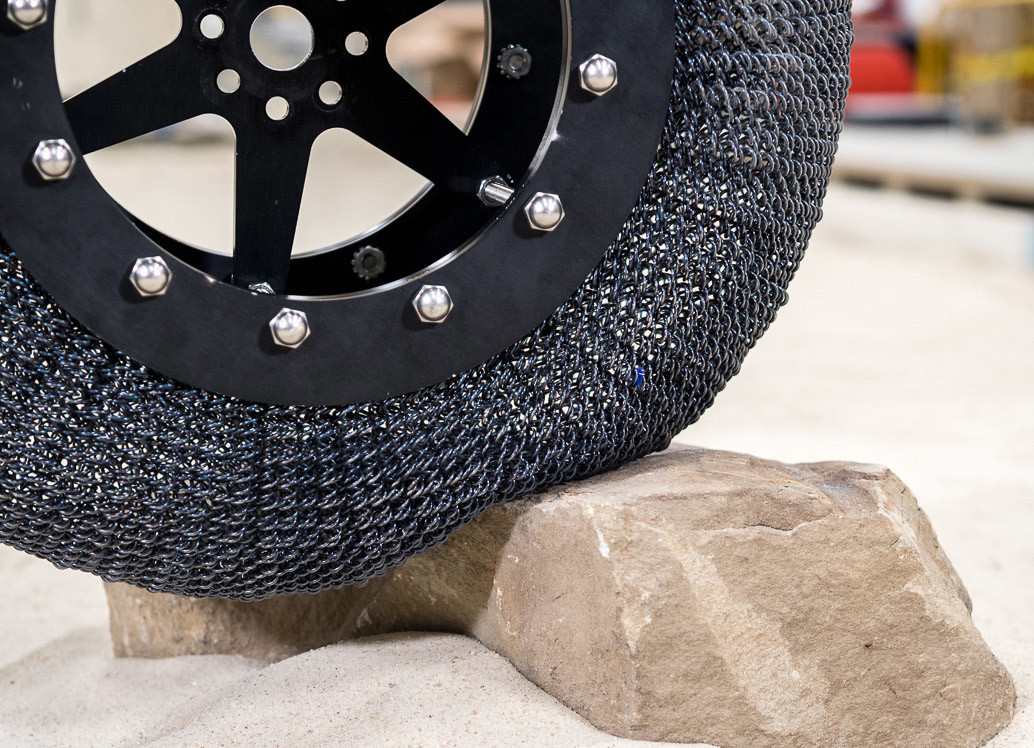 The NiTi stoichiometric alloy is mentioned in Part 2:

The answer broadly is yes, but there are a ton of caveats.

I used to work with applying Nickel-Titanium alloys (usually known as Nitinol) as actuators in the biomedical field. Before going any further I'll relay the actual advice I was given by an applications engineer from a leading supplier of specialist metals: "If you can find any other way to achieve your goal without using Nitinol, you should do it. [...] Often we find that the models are unreliable and we just have to try it and see if it works".

I still harbour a burning hatred for this damnable metal. I'm convinced it hates me. I have no idea what I did to offend it.

Back to your question: Nickel-Titanium (in the right proportions) is a shape-memory-allow (SMA), however in this application the SMA property is not being used directly, rather the Nitinol's superelasticity is what gives the wheels their resiliency to deformation.

Wikipedia has a really good definition of Nitinol and it's SMA and superelastic properties:

Nitinol is an intermetallic compound, which gives it a highly regular crystalline structure compared to standard alloys. The crystal structure takes on two separate forms at different temperatures, martinsitic at low temperatures, and austenitic at high temperature. The ability to switch between crystalline states is what gives the alloys it's shape memory properties (I'm oversimplifying, but this is close enough).

The image below shows the Nitinol hysteresis loop, again, Wikipedia has the best explanation: 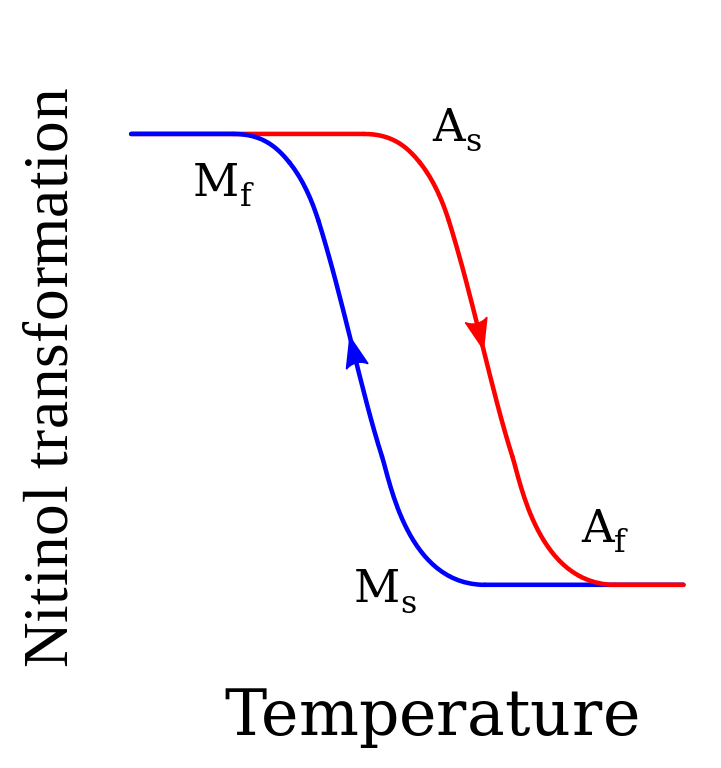 The key thing is that the temperature at which the shape-memory and superelasticity occur can be controlled by precisely controlling the ratio of Nickel to Titanium in the alloy, and thus shifting the point of martinsitic transformation. 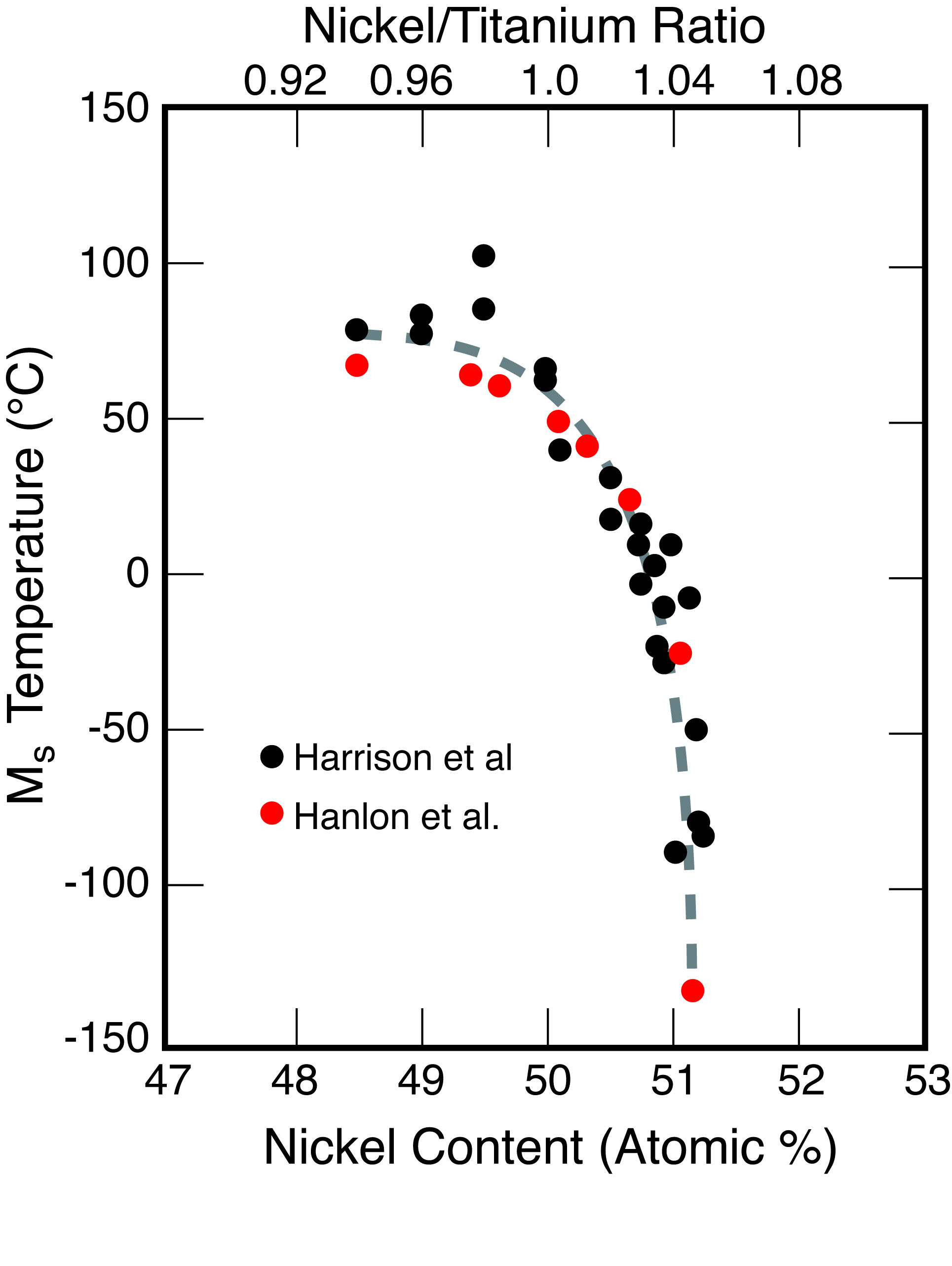 This means that it is possible to create a version of Nitnol that exhibits superelasticity at room temperature, or even at 100 degrees below zero. Thus, no heating is needed to reset the wheels as it could be said that they are in a constant state of "resetting" if the Mf temperature is set correctly.

For the other part of your question:

Mars 2020 is intended to be a sister robot to Curiosity with the only main difference being the instruments. This far through the mission campaign it's probably too late to change major components like wheels, especially when the TRL (Technology Readiness Level) for these new wheels is probably only around 5-6 (technology demonstrator) at the moment.

Not the answer you're looking for? Browse other questions tagged mars nasa rovers or ask your own question.

57
Curiosity: Why did they "reinvent the wheel" instead of using pressure tires?
5
Why are images from DSCOVR EPIC unavailable for certain dates?
8
Why does the Perseverance rover have such complicated shaped spokes in its wheels?
4
Are Perseverance's wheels really this big?
5
What are these details on (renderings of) the Zhurong rover's wheels?