Is the Flyby Anomaly still a thing?

The Flyby Anomaly is a name given to an unexplained, unexpected difference between the best theoretical calculation of a change in several different spacecraft's velocities due to flyby (Gravity Assist) maneuvers, and the best analysis of the measured changes.

While it's summarized in the linked Wikipedia article, and a long list of possible explanations is given, is there at least some movement towards a consensus on the source of the discrepancy? Or has it been (mostly) explained and the Wikipedia article needs to be updated?

Or is this still, in 2017, a credible, outstanding unexplained phenomenon in spaceflight? Are there any plans to try to detect or reproduce this anomaly with future space missions that include flybys? 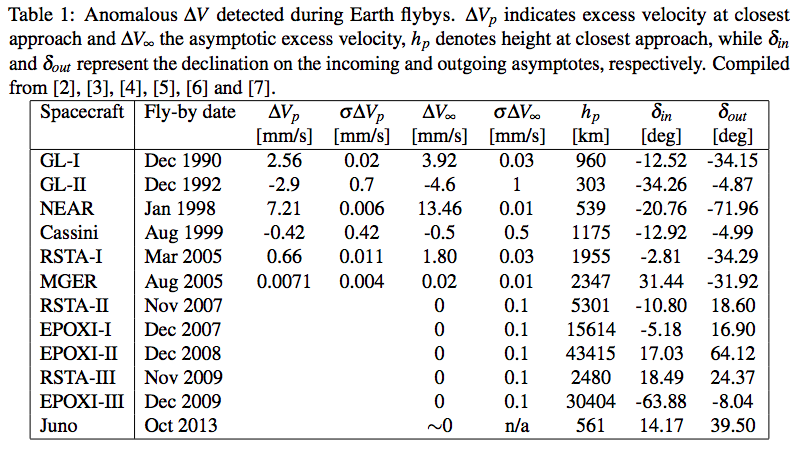 Yes, the Flyby Anomaly is still an unsolved problem. Studies have found several candidates for the cause of the anomaly.

A recent study examined Juno's behavior on its Jupiter orbits, and found the anomaly there as well:

“Our conclusion is that an anomalous acceleration is also acting upon the Juno spacecraft in the vicinity of the perijove (in this case, the asymptotic velocity is not a useful concept because the trajectory is closed). This acceleration is almost one hundred times larger than the typical anomalous accelerations responsible for the anomaly in the case of the Earth flybys. This was already expected in connection with Anderson et al.’s initial intuition that the effect increases with the angular rotational velocity of the planet (a period of 9.8 hours for Jupiter vs the 24 hours of the Earth), the radius of the planet and probably its mass.”

Some possible origins of the anomaly have been discarded:

It is important to emphasize that this anomaly is also observed in the ranging data and cannot be attributed to a conventional or unconventional issue related entirely to the Doppler tracking. A primary evaluation of the possible conventional physical effects with could be contributing to the anomaly was carried out by Lämmerzahl et al. [31]. Ocean tides and a coupling of the spacecraft to the tesseral harmonic terms in the geopotential model have also recently been studied 2. Atmospheric friction can also be dismissed except for flybys at altitudes of 300 km or lower [4]. The same can be said of the corrections corresponding to General Relativity [28, 26], thermal effects [41] or other [14].

But the study found no conclusive cause for the anomaly:

Summarizing, we can say that in this paper: (i) We have found evidence that an anomaly could be operating also during the Juno flybys of Jupiter (ii) We have developed a theoretical model to compare with the orbital model fitted to telemetry data in order to disclose the form of the possible anomalous acceleration field acting upon the spacecraft. A significant radial component was found and this decays with the distance to the center of Jupiter as expected from an unknown physical interaction. (iii) The anomaly shows an asymmetry among the incoming and outgoing branches of the trajectory and this could be suggestive of a non-conservative interaction. The confirmation of these conclusions would require further independent analysis and we hope that our work will stimulate future research in this and other planetary flybys.

Another paper studied Juno's Earth flyby, and found that inaccuracies of the geopotential model (Earth's gravity field) used to model the flyby could account for the flyby anomaly:

The only perturbation that we examined that was found to be capable of producing something detectable in real-time and comparable to the predicted flyby velocity anomaly was truncation in the Earth’s geopotential model. Previously, we had found a 10x10 degree/order field sufficient for supporting launch operations. The uncertainties in the trajectory during that phase were large enough as to not require a higher fidelity model. However, for the EGA flyby we found that the perturbation caused by including the additional effect of the higher degree and order terms was as large as 4.5 mm/s when using a 50x50 field.

Another paper concluded that solar radiation pressure is another candidate:

Solar radiation pressure presented more interesting results: small changes in the solar radiation pressure coefficient CR could explain the anomaly. In more detail, uncertainties in the values of the reflectivity coefficients of the materials that cover the spacecraft could be held responsible for the anomalous velocity change observed. Actually, we proved that modifications of the specular and diffuse reflectivity coefficients by an amount ranging from 10−4 to 4*10−2 are sufficient to successfully eliminate the unexpected velocity shift at perigee.

Yes, the Flyby Anomaly is still an unsolved problem, probably because it is impossible to solve under conventional theories of gravity:

There is an alternative gravitational theory here claiming to have a solution for it. The proviso about this theory is that it is still under development, incomplete and not peer reviewed yet. Nevertheless, it contains new material worth investigating and relevant to the question.

The anomaly is attributed to possible different orientation of spacecraft during the inbound and outbound trajectory. The velocity is found to be a function of the absorptivity of gravitational flux, which is a function of orientation. Terrestrial experiments have failed to establish a difference in falling velocities, because it is smaller than the errors involved (i.e., as yet undetectable), but the effect is cumulative and allegedly detectable during a very long fall towards a planet. The variability of this phenomenon among various spacecrafts may then be attributed to different mass distribution and orientation that happen to be in each case. In Section 23.2.4 of the above reference, there is a proposal for interplanetary testing of the falling speed, as well as the effect of shape, direction, and contraction factor. The test design is shown in Fig. 54. It is presented as a potential successor to the recent "space test of the equivalence principle” (STEP) experiment. The flyby “anomaly” is a direct consequence of the founding background of this gravitational theory per Figs. 55 and 56 and demonstrated in Fig. 57 as a potential application to generate orbital amplification and interplanetary trajectories by energy drawn from the surrounding particle flux. The force and speed depend on the absorption of a push particle flux ultimately responsible for gravity. The orbital amplification is achieved by changing the absorptivity of the orbiting body at the perigee and apogee alternately. This corresponds to a variation of effective mass in a way that results in an increased apogee, after which the procedure is repeated.

The above theory is an attempt to revive the centuries old Fatio principle for gravity but by an entirely new approach. Prevailing theories may object to it, especially when notables have already rejected it in the past, but science remains open to novel proposals deserving due attention. At any rate, it provides an answer to the flyby “anomaly” (being so) by existing theories but not any more of an anomaly if the proposed theory can be verified.

9
How precise are spacecraft trajectory measurements?
6
Source for up-to-date values of Mars' standard gravitational parameter
7
Have LAGEOS' germanium corner cube reflectors ever been used?
5
Is Lunar Horizon Glow still a thing? Has the "dust settled" on the topic?
4
(How well) Did Juno provide any insight into the Flyby Anomaly?
1
Possible idea for a simulation in orbital mechanics using data from the JPL

7
Why does the Juno spacecraft flyby Earth on the way to Jupiter?
16
What pushes a spacecraft during a flyby?
4
Calculating the periapsis radius of a flyby manoeuvre without knowledge of the eccentricity of hyperbolic trajectory
2
How close to the moon would a flyby trip likely attempt?
4
How is flyby distance estimated?
6
Will crewed vehicles ever follow multi-flyby trajectories?
21
Optimal depth for underground flyby?