What is the best position for a human to be in during launch?

We know from the answers to the question If a human is being sent to space in a rocket, does the seating angle matter? that seating position at launch is of less concern than landing. We also learn that some craft (Soyuz) have seats that change position between launch and landing.

What is the best (safest) position for a human at launch? 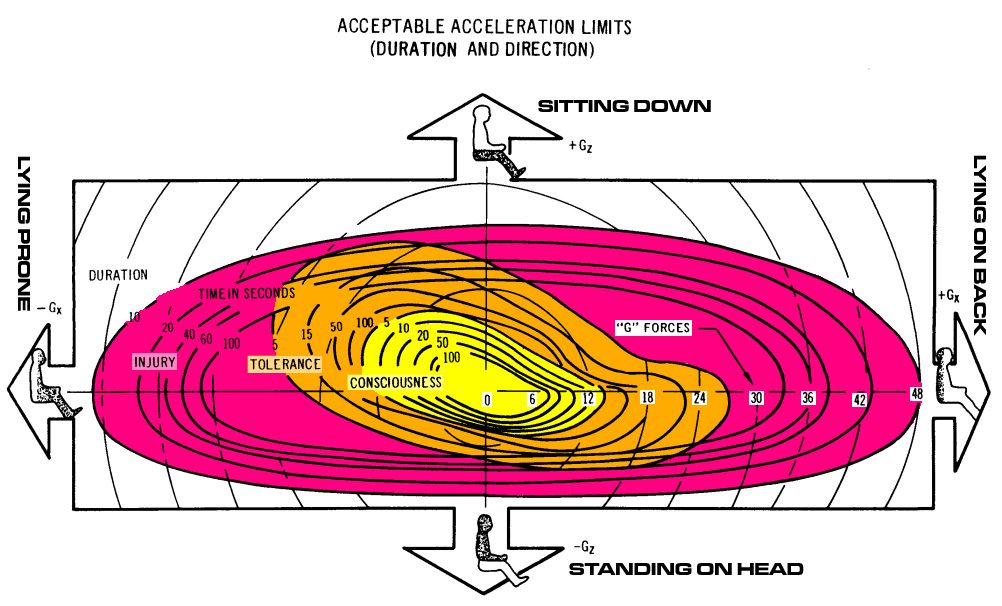 For example, an astronaut in the recommended +Gx lying on back position would have 5 seconds of consciousness at 14g, 5 seconds of tolerance at 27g and 10 seconds until injury at 48g.

Chart from a 1963 Douglas report

The direction in which the G-forces are applied matters:

(See also obligatory related XKCD/What If? link with a nice image) The Wikipedia article on G-force has some explanations on the effects to the human body depending on the direction. The human body is best able to tolerate acceleration "forward".

NASA has a short paper about the considerations for the seating but I didn't spot anything about the medical aspects of how the astronaut is seated (e.g. "lying" vs. "crouch"). Although current seats all position the astronaut in a slightly crouched position, it would be interesting whether lying straight might actually be preferable if you are only considering the launch and ignore the landing. However, I wasn't able to find anything about that topic.

Not the answer you're looking for? Browse other questions tagged launch safety humans or ask your own question.

14
If a human is being sent to space in a rocket, does the seating angle matter?

9
What purpose do these red “horns” on the Soyuz 2-1B payload fairing serve?
3
Fuelling LH2/LOX conectors for Rockets - is it easy to manually attach to the intake nozzles?
7
What exactly does it mean to human-rate a rocket? As opposed to the escape system?
12
Why is Dragon the only spacecraft that is currently in use to not need a fairing for launch?
8
Why were ejection seats used in Project Gemini instead of a tower escape system?
8
Were ejection seats on the Space Shuttle a practical safety system?
6
Saturn launch precautions for clearing tower?
7
How much jerk do astronauts experience? Is there a safety limit?
11
What sensors or combination of sensors do rockets use during takeoff for their orientation?